This year’s budget allocation for energy sector, like previous years, is all too cosmetic
Bhrikuti Rai 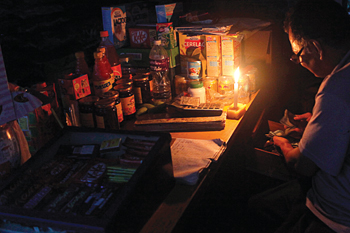 BIKRAM RAI
The budget announced by the interim finance minister last week was the first full budget to be presented in time for years. It has prioritised the energy sector and aims at massive reforms in generation of hydropower, construction of transmission lines, and distribution system with a Rs 30 billion allocation.

Finance Minister Shankar Prasad Koirala said huge investments were required in the hydropower sector to relieve the country from the curse of load-shedding within three years. This is not the first time a budget has promised an end to power cuts.

The Pushpa Kamal Dahal government set out a goal of generating 10,000MW in 10 years and the Madhav Kumar Nepal government that replaced him was even more ambitious in aiming for 25,000MW in 20 years. A task force set up in 2011 to look at power scenarios said it was possible to generate 2,000MW by 2014 through power projects for domestic consumption, another 10,000MW by 2024 through a combination of run-of-the-river and storage projects, and 18,000MW by 2029 through export multi-purpose mega projects like Karnali and Kosi.

It is 2013 already and the country’s total installed capacity stands at a mere 746MW and only 40MW was added last year. Hydro experts and power producers fear that even doubling the allocation for energy compared to last year will not eradicate load-shedding.

“Thirty billion rupees isn’t really a very big investment in the cost intensive hydro sector, but we will have to see even if this amount is really translated into tangible progress on the ground,” says hydro analyst Ratna Sansar Shrestha. 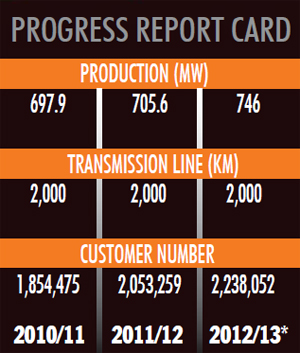 Of the Rs 30 billion budget, the government has set aside Rs 1.05 billion for 140MW reservoir type Tanahu Hydro Project while Rs 4.66 billion has been earmarked for five government funded projects including Upper Trisuli 3A, Upper Modi, Raghughat, Chameliyagadh, and Kulekhani III. Enlisted under ‘projects of national pride’ is Upper Tamakosi that will receive Rs 2 billion for timely completion.

While it may sound a lot, the 30 billion budget for energy will be scattered among various projects increasing the uncertainty of their completion. Add to that the endless red tape, opposition from the locals, constant shuffle of officials in the ministry, frequent changes in government with different set of priorities, and towards the end of the fiscal year, like always, there won’t be much to show.

Last year not a single kilometre was added to existing transmission lines (see box) despite the Rs 6 billion earmarked for it. Two years ago, a mere 9MW was added to the national grid. This year Rs 13.5 billion was set aside for constructing cross-border transmission lines, north-south corridor lines, and east-west power lines.

But unless government bodies like NEA improve their institutional capabilities, it will be difficult for them to mobilise such large amount of money. An official from the Ministry of Finance who is all too familiar with NEA’s laid back attitude says, “When we asked them to take as much money as they want to tackle load-shedding in three years, the NEA’s leadership stayed mum.”

NEA has been counting on Upper Tamakosi (456MW) for relief from load-shedding and NEA’s Sher Singh Bhat like always sticks to his argument about how power cuts will be history once it is completed in four years. 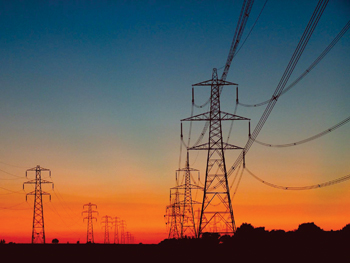 But demand for electricity is projected to exceed 1,700MW in the next five years and by the time Upper Tamakoshi, Upper Trisuli 3A, 3B and Chamelia are completed, they will only add 586MW to the grid. This means there will still be a shortfall of over 400MW at full capacity and we will need extra installed capacity to cover for the winter deficit.

Experts say the inability of successive governments over the past 15 years to add generation capacity to keep with demand has continued with the current technocrat government. Koirala’s budget, for instance, doesn’t really have short-term programs to tackle the immediate crisis. Petroleum is going to get scarcer and more expensive and there is no strategy to lessen the economy’s dependence on imported oil.

It is clear that people who neatly tie the red ribbon over the budget briefcase don’t know or don’t care just how bad the energy scenario is. Throwing billions at the problem is not going to solve it. It is a miracle the country is still functioning despite a daily six-hour power cut during the monsoon and 16 hours a day without electricity in winter. But even miracles have shelf life.

The urgency of the energy emergency

Higher they go, further they fall

Everywhere we look, we see double
Wow! It namely likewise fine treatise about JavaScript, babyliss pro curler I dissimilar Your post doesn't acquaint any sense. ray ban outlet uk if information are defined surrounded sketches one can effortlessly be versed with these. hollister sale I think a visualized exhibit can be better subsequently simply a effortless text, chanel espadrilles for sale that why it gives you improved quality. getnjloan.com Can you amuse forward me the code for this script alternatively interest distinguish me surrounded detail among relation apt this script? Vivienne Westwood online get a babyliss perfect curl Very soon this network sheet longing be outstanding among all blog viewers, isabel marant sneakers saleI too prefer Flash,