There are ways to prevent the common cold 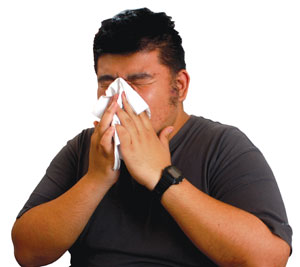 The telltale signs of the arrival of the cold winter are sneezing, coughing, sore throat, and runny nose. Is it the lack of a hat or scarf that causes the common cold? Does the chilly air make people more prone to get sick? The belief is popular yet disputable.

Rhinovirus (RVs), the primary cause of the common cold, affects nearly 10 to 40 per cent of the general population at a given time. RVs is responsible for a host of respiratory tract infections. It was believed that RVs thrive more efficiently at cooler temperature in the nasal passages (33 degrees) than at a higher core body temperature (about 37 degrees).

Researchers at Yale University discovered that our immune system is compromised against viruses at cooler temperatures, and it is not the ability of the viruses to replicate more at a chillier temperature. A study where the airway cells of mice were inflected with rhinovirus showed that living beings have lower innate immune response to viruses at a lower temperature. It was interesting that when the body’s anti-virus defences were genetically removed, the virus could multiply at both lower and higher temperatures. Therefore it is reasonable to assume that colder weather suppresses our immune system, making us more prone to catch a cold.

Despite the advancements that modern medicine has made, there is no cure for the common cold. There are antihistamines that only suppress the symptoms of the cold such as runny nose and watery eyes. It is challenging to develop a vaccine against the common cold because there are 20 to 30 strains of RVs at a given time in any geographic area. In addition, every season scientists discover more strains of RVs.

But what should you do when you catch a cold? Just rest, drink warm fluids, keep your distance from people who are not sick and let the cold run its course. Our families grew up with several remedies for the cold such as drinking hot lemon with honey and gargling with salt water among others. These remedies may not cure the cold but they do definitely alleviate the discomfort caused by the virus.

Nepalis are quick to take antibiotics for the cold that is quite useless as antibiotics only kill bacteria and have no effect on viruses. Instead these antibiotics may kill the good bacteria that we have in our bodies and the over usage of antibiotics has led to people being more resistant to them.

How then can we prevent ourselves from catching a cold? A sure yet impractical method would be to seclude yourself from all living beings. Other humanly possible precautions are washing one’s hands carefully for 20 to 60 seconds, avoid touching eyes, nose and mouth with unwashed hands and keeping distance from people who have the cold. It is always helpful to dress warm when outside in the cold as it may prevent your body’s temperature from lowering to a point where the RVs start vigorously multiplying in your nasal cavities leading to common cold.

It is impossible to avoid the common cold but there are ways to try to prevent it or not make it last as long. Listen to your mother the next time she asks you to wear a jacket before heading out in the cold, you will thank her later.

Flu in from the Middle East, Buddha Basnyat