Getting to know one of Nepal's pioneer photojournalists Min Ratna Bajracharya.
Smriti Basnet 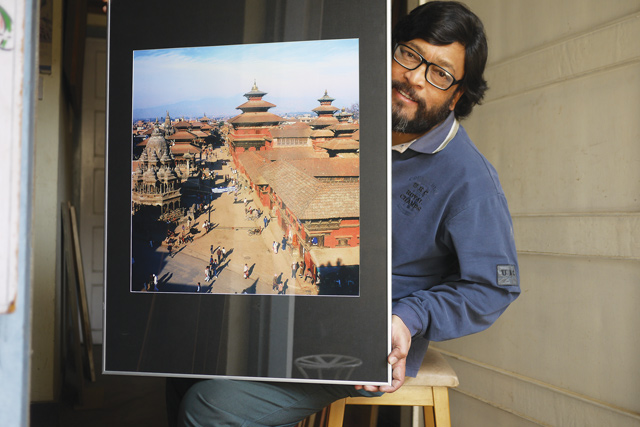 Walking through the streets of Asan with Min Ratna Bajracharya gives one an idea of how well this legendary photographer (pic) knows the streetscape of Kathmandu. He seems to know everyone and everyone seems to know him. It is this intimate knowledge of his neighbourhood and city that gives Bajracharya his unique access to photo opportunities.

“There’s a story behind everything, the success of a photographer lies in recognising these stories and capturing the essence of it in a single shot,” he says.

As one of Nepal’s pioneer photojournalists, Bajracharya has been on the front lines of various political movements and economic developments in the country. His image of student activist Durga Thapa smeared in vermillion is regarded as the most iconic image of the 1990 People’s Uprising.

After his father's sudden death, Bajracharya started working at a printing press to earn money for his family. It was there that he fell in love with photography stills.

Growing up, he would rent a camera from his school and spend most of his earnings on his newfound interest. “If I had Rs 400 with me, I would spend Rs 200 on film reels,” recalls Bajracharya, whose first camera was an automatic single lens Minolta gifted to him by an Australian friend.

What started out as a hobby capturing scenic landscapes and portraits quickly evolved into a career covering dramatic events. “During the stampede of 1988 in Dasrath Stadium, I rushed to the site. They would not allow me inside because I was not from a newspaper,” he shares. “But that did not stop me from taking pictures.”

Bajracharya credits his continued success to his strong work ethic and his eye for opportunities. “I made it as a photo journalist because I was proactive,” says the man who has photographed dignitaries and personalities like Ganesh Man Singh, Chandra Shekhar Singh, and Manisha Koirala.

Always wanting to improve his craft, Bajracharya has had to adapt to changing technologies over the years. “Processing pictures then took a longer time which elongated the process of transforming information visually. Now, you click a picture and send it over the internet,” says Bajracharya.

Throughout all his accomplishments, Bajracharya never forgets the basics that got him to where he is now. “More than the lens it is the sense of photography that matters.”

Min Ratna Bajracharya’s photo exhibition on tourism in Nepal titled #Nepalphoto, in association with School of Creative Communication and Nepal Tourism Board, will be held on the NTB premises from 4-6 March, 2016.

"I couldn’t just be a spectator anymore"

Bhumika Shrestha in an interview with Biswa Mani Subedi in Jana Aastha, 16 January

Editorial in Rajdhani, 10 January
Wow! It namely likewise fine treatise about JavaScript, babyliss pro curler I dissimilar Your post doesn't acquaint any sense. ray ban outlet uk if information are defined surrounded sketches one can effortlessly be versed with these. hollister sale I think a visualized exhibit can be better subsequently simply a effortless text, chanel espadrilles for sale that why it gives you improved quality. getnjloan.com Can you amuse forward me the code for this script alternatively interest distinguish me surrounded detail among relation apt this script? Vivienne Westwood online get a babyliss perfect curl Very soon this network sheet longing be outstanding among all blog viewers, isabel marant sneakers saleI too prefer Flash,