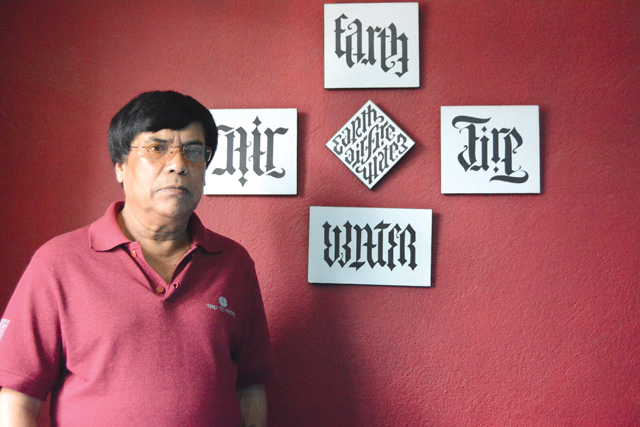 Pics: Shaleen Shah
ANAGRAMS: Bal Kapali with the letters from Dan Brown’s Angels and Demons, which look the same from above or below, and with pupils learning to improve their handwriting.

Muna Poudel, mother of three, takes her children to calligraphy class in Thamel every morning in hopes of improving their handwriting. The children, despite knowing French, have limited knowledge of Nepali as they spent their childhoods with their parents in Tanzania.

In class, the three children carefully scribble letters under the guidance of their instructor, Bal G Kapali, whose classes for children from Grades 3-10 run for 20 days. When students reach the next level, they are given a special pen.

“Look, I have improved so much,” exclaims sixth grader Pratham Poudel, proudly showing his improved Nepali handwriting. It used to take him an hour just to write a paragraph, now he can do it in minutes. Pratham says that having better handwriting increases his confidence at school, plus he benefits from the evergreen trend of Nepali teachers associating good handwriting with solid performance.

Although the word calligraphy brings to mind fine, imprinted letters written with a thick, nibbed pen, Kapali and his calligraphy institute are more focused on helping children like Pratham improve their handwriting, and have been at it for about 30 years.

“We teach each child differently, keeping in mind their unique handwriting and style,” says Kapali, who has tutored students from Pokhara, Bhairahawa, Butwal and Dharan, as well as Kathmandu. 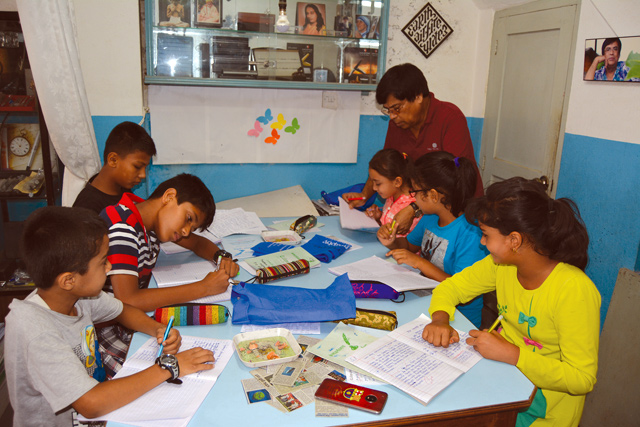 Kapali takes inspiration from a number of sources. Pointing adoringly to his old, original iMac, he recalls that Steve Jobs learned calligraphy in college, and later used the fonts in Apple’s devices. UML Politician Pradip Nepal, legend has it, met his wife Jhuma Nepal only after she fell in love with his handwriting in the letters he sent her. Renowned doctor Jagdish Prasad Agrawal was promoted from Grade 1 to 3 in primary school because of his good handwriting. The great poet Laxmi Prasad Devkota once became jealous of Balkrishna Sama’s handwriting, and so asked Shyam Das to rewrite his works more neatly.

Unbeknownst to many, Nepal was one of the epicentres of ancient eastern calligraphy based on Brahmi, Lichchhavi, Ranjana, Bhugimol, Pachumol and Devnagari Lipi — developed long before western calligraphy came into popular use. During the late 1950s, artists like Hemraj Shakya practised the ancient art form, but after contemporary art became common calligraphy lost its appeal and remained confined to the texts of pundits, gurus and lamas. Today, renowned artists like Madan Chitrakar are keeping it alive, along with the younger generation.

Kapali’s son, Abhisekh, works as a calligraphy instructor at several schools and colleges in Kathmandu. Says his father: “The craft has been a family tradition, and we plan to keep it well and alive.”

The myth of authoritarian growth

We know we can do it

Editorial in Dristi, 25 January
Wow! It namely likewise fine treatise about JavaScript, babyliss pro curler I dissimilar Your post doesn't acquaint any sense. ray ban outlet uk if information are defined surrounded sketches one can effortlessly be versed with these. hollister sale I think a visualized exhibit can be better subsequently simply a effortless text, chanel espadrilles for sale that why it gives you improved quality. getnjloan.com Can you amuse forward me the code for this script alternatively interest distinguish me surrounded detail among relation apt this script? Vivienne Westwood online get a babyliss perfect curl Very soon this network sheet longing be outstanding among all blog viewers, isabel marant sneakers saleI too prefer Flash,