The wheel of life 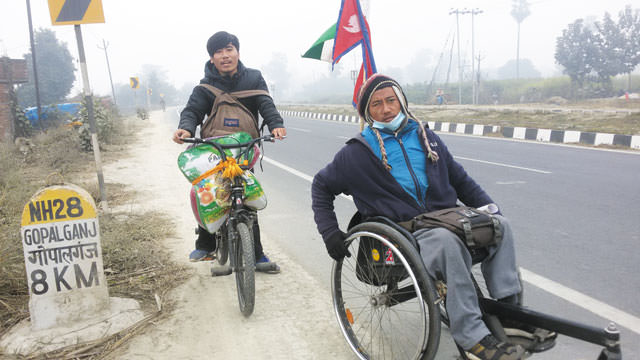 A deadly road accident made him a paraplegic, but the tragedy only sharpened his determination. Ram Bahadur Gole, now 36, was a happy-go-lucky mason in Kathmandu. He used to hang out with friends in a local tavern every evening, wasting much of his earning on drinks. He didn’t care much about his wife and children.

On a winter afternoon in 2011, Gole was returning from a rowdy trip with friends to Tatopani on the China border. The bus skidded off the highway, killing his friends and fellow passengers. Gole lost consciousness, and when he came to he found out he was paralysed from the waist down. Rescuers had left him for dead.

“I myself wondered if I was dead, and it was my soul searching for help,” he recalls.

Rescuers found Gole only when they began to collect the bodies. He was referred to the Spinal Injury Rehabilitation Centre in Sanga, where he says he began to understand why family and relationships matter in life.

Gole has been wheelchair bound since, but he has a supportive family. And he is out on the road again, this time to prove himself. He recently travelled from Lumbini to Bodhgaya in his own wheelchair, exploring not just lives and lifestyles but also his own inner peace and happiness along the way. He was accompanied by his son Bigyan, while on an earlier trip to Lumbini from Namobuddha, his wife Sanumaya went along. 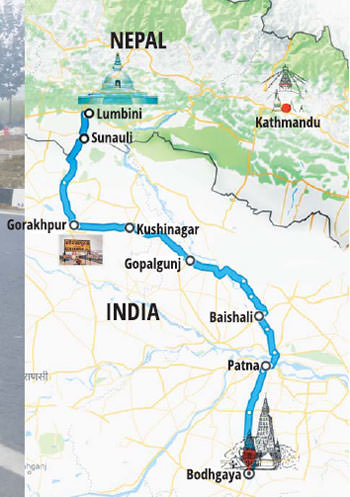 Gole started from Lumbini on 26 December, and traversed only 30km of Indian highways on the first day. He made better progress as he went on, needing 12 days to travel from the Buddha’s birthplace to the place where he attained enlightenment.

During this cross-border odyssey, Gole interacted with as many Nepali and Bihari villagers as he could. What struck him the most in India was how only men were visible. “Just like how physically disabled people cannot easily move around Kathmandu, women in that part of India too are restricted in their movement,” he sums up.

Gole was also struck by rampant open defecation, much worse than in Nepal. He once asked a Bihari villager why they had not built toilets. The reply: “We need to bathe every time we go to the toilet so we prefer to do it on river banks.”

Wherever he reached, people surrounded him with curiosity. Some pitied him for having to undertake such a painful journey. “They just saw my physical suffering, they did not realise how blissful I felt,” he recalls. In Bodhgaya, the main temple is atop a high plinth, and lacks a wheelchair ramp. Disappointed, Gole paid his respects from afar.

“I can forgive our ancestors for not building wheelchair-friendly temples,” he says. “But why even today don't people think about infrastructure for the differently abled?”

The hardships Gole faced during this trip have not put him off. He is now more ambitious, and has already begun to plan for the next mission: wheeling himself across all South Asian countries.

Our job to reach out, Samira Shakya

Leave no one behind, Sangita Thebe-Limbu

When will our political hues be a harmony of colours?
CK LAL

Its sweet scent this season reminds me of Aama
TRISHNA GURUNG
Wow! It namely likewise fine treatise about JavaScript, babyliss pro curler I dissimilar Your post doesn't acquaint any sense. ray ban outlet uk if information are defined surrounded sketches one can effortlessly be versed with these. hollister sale I think a visualized exhibit can be better subsequently simply a effortless text, chanel espadrilles for sale that why it gives you improved quality. getnjloan.com Can you amuse forward me the code for this script alternatively interest distinguish me surrounded detail among relation apt this script? Vivienne Westwood online get a babyliss perfect curl Very soon this network sheet longing be outstanding among all blog viewers, isabel marant sneakers saleI too prefer Flash,