The boy gods of Kathmandu

Besides the Living Goddess, Kathmandu also reveres the incarnations of Ganesh and Bhairab
Sahina Shrestha 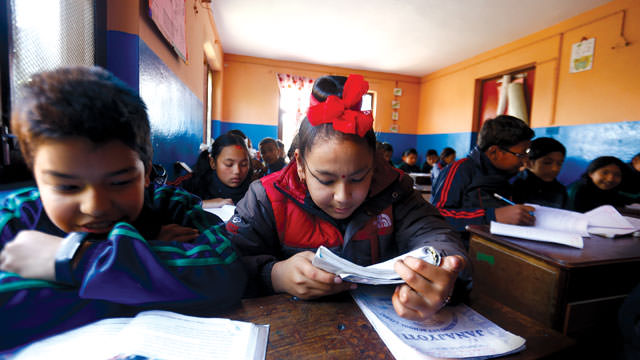 Almost everyone knows that Nepal is the home of the Kumari, but very few have heard that in Kathmandu Valley, two boys also are Living Gods.

Tucked away in a narrow alley in the Pako and Om Bahal areas of inner-city Kathmandu are the living manifestations of Ganesh and Bairab, worshipped in conjunction with the Living Goddess every year during the Indra Jatra festival.

However, unlike the Kumari, there are no exotic tales associated with these incarnates, who have it slightly easier than the Living Goddess: the boys are allowed to live at home with their parents, go to school and play with friends. 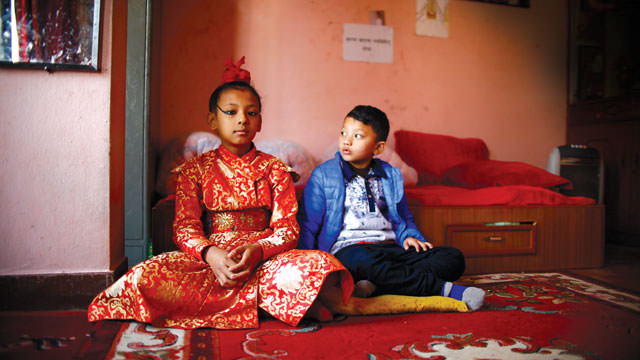 Gopen Rai
Reigning Ganesh, Sambeg Shakya (left), with his seven-year-old cousin Mahim Shakya. Sambeg is a seventh-grader at Green Peace Co-ed School and wants to be an engineer when he grows up.

While other cities, including Patan, Bungamati and Bhaktapur, also have their Kumaris, it is only in Kathmandu that Ganesh and Bhairab are worshipped in their living form.

“In Hinduism, every important god or goddess is flanked on either side by Ganesh and Bhairab,” says Yagyamanpati Bajracharya, a scholar of Kathmandu culture. “Ganesh is the god of good fortune and Bhairab is the protector. But since society was more matriarchal in the past, more importance was, and, is given to the Kumari.”

The selection process for the boy gods is the same as for the Kumari. They have to be from a Shakya clan belonging to one of the 18 bahals in Kathmandu. The purity of their lineage has to be ensured and their natal charts have to be in harmony with that of the country and the people (and formerly with the ruling king’s chart as well).

The boys continue as Living Gods till they are too big to fit in the chariots, after which they retire and new gods are inducted (during Dasain) and the ornaments passed on to the new Living God. 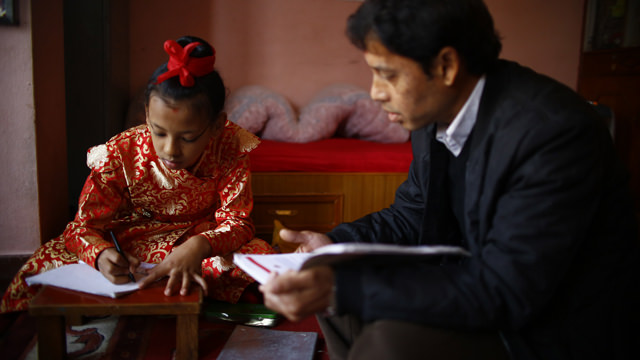 Sambeg Shakya was five when he was selected as Ganesh by Buddhist priests, and for the past seven years has led the chariot procession during Indra Jatra. The reigning Bhairab, Rujan Shakya, rides behind him during the procession. He was 2 when he was selected, and has been fulfilling the responsibility for the past 10 years. The three-tiered Kumari chariot follows the other two during the Jatra.

“When a new Kumari is inducted, it has to be done in the presence of Ganesh and Bhairab,” explains Karmacharya. “During Dasain all three have to be taken to Taleju for puja.”

When Sambeg and Rujan are not busy with their godly duties, the 12-year-olds go to school like any other boys their age. Sambeg enjoys eating potatoes and dreams of becoming an engineer “to build beautiful houses”, while Rujan, who wants to be a football player “just like Marcelo Vieira”, is biased towards peda. 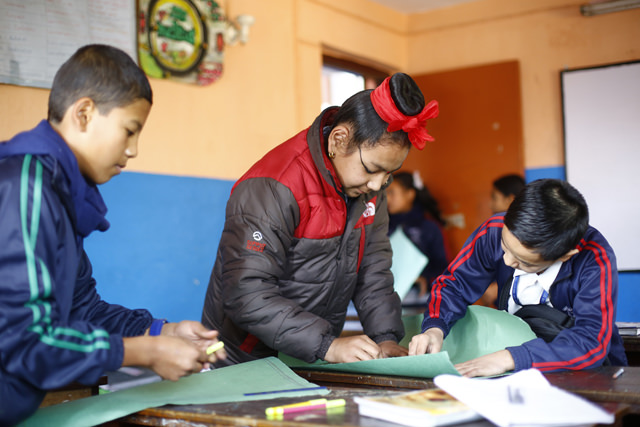 Sambeg is good at his studies, always ranking in the top five at school. Rujan, on the other hand, is an average student who prefers extracurricular activities. While being a student can be difficult for any child, being a God has its perks.

“When I joined the school, I didn’t know about Living Gods. But Rujan’s friends set the record straight from the get go,” says Bam Bahadur Sunar, who teaches English literature at Janajyoti English Secondary School, where Rujan is a seventh grader.

“They told me that I was not supposed to scold or punish him because he was a God. So I do treat him a bit differently,” he adds But as Gods, there are also some do’s and don’ts: the boys are not allowed to cross rivers and cannot eat eggs or chicken. 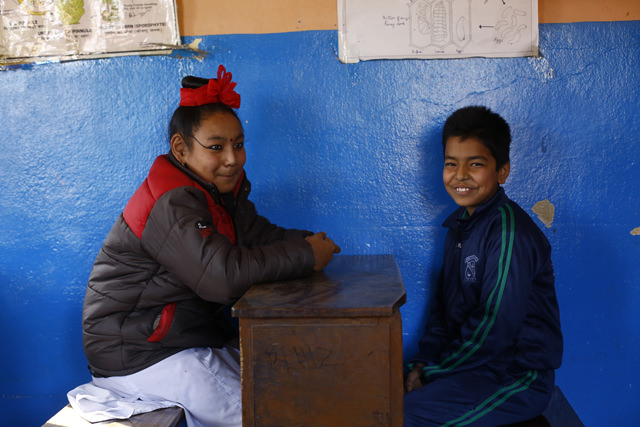 On normal days both of them dress in a long white tunic and red trousers. Their long hair is tied in a topknot with a red ribbon and their eyes are lined with kohl. The boys have silk dresses for special occasions, but wear their complete regalia only during Indra Jatra. They cannot wear anything made of leather, including shoes.

The ensemble makes it easy for them to be confused with the Kumari, which happens quite often, according to Bishwo Prakash Shakya, Sambeg’s father: “Otherwise, except during Indra Jatra, no one really asks after the two of them. Nobody recognises them.”

After becoming Gods, the boys’ families receive a small government stipend for upkeep and education. “But it is barely enough,” says Bishwa Shakya, Rujan’s maternal uncle. “It is already becoming difficult to find families willing to allow their sons to become Living Gods because they are not as famous as the Kumari and the government couldn’t care less.”

But, says Subarna Tara Shakya, Rujan’s mother: “As the only Living Gods in the entire world, they are a very important part of Nepal’s identity. It would mean a lot if the country too gives them the recoginition they deserve.”

Till the day he graduated from high school, many friends and teachers of Kapil Ratna Shakya at the school didn’t know his real name. To them he was simply ‘Ganesh’, the boy revered as one of the two Living Gods, who wore a different uniform to school and was allowed to have long hair despite being a boy. Kapil was two years old when he was selected to be an incarnation of Ganesh. He was 15 when he retired and handed over his duties to his cousin Sambeg Shakya, the reigning Ganesh.

During his 12 years as a boy God, Kapil Ratna remembers getting special treatment at home and school. During exams, his schoolmates would come by to pay their respects. “Initially I was a little embarrassed with the clothes, the hair and also the attention. But as I grew up, I understood the importance of the position I was given. But because I was treated differently, I often used it to wriggle out of doing homework,” recalls Kapil, now 22. 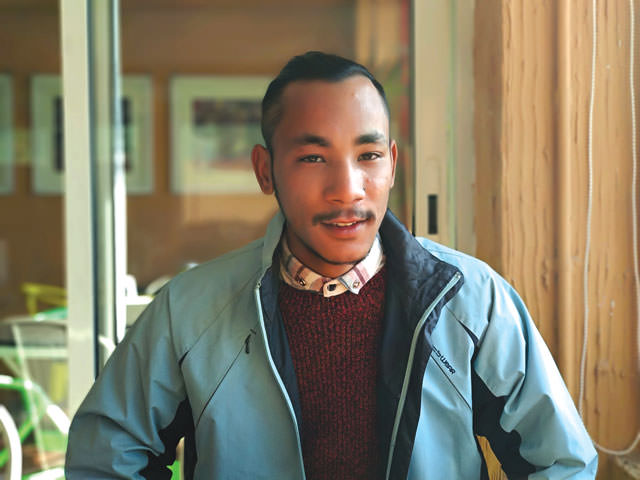 As much as he enjoyed the annual chariot festival, he remembers falling asleep quite often. “The head gear and the clothes were heavy and the long chariot procession tired me. But it is an experience I wouldn’t trade for anything in the world,” he adds.

Bhairav Shakya is now 33 and also doesn’t feel like he missed out on any of life’s opportunities while he was a Living God. “Of course, there were times when I wanted to go for a swim with my friends but wasn’t allowed to. But I did those things once I retired from the position,” says Bhairav, who was only two when selected as the Living God. By the time he retired he was 14. Today he runs a jewelry business. 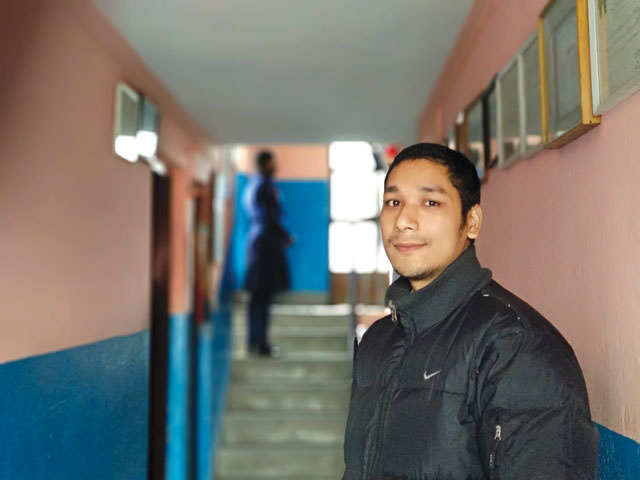 Because they lived with restrictions during their times as Living Gods, both men feel that they were not as street smart as their peers and transitioning from being a Living God to a mere mortal wasn’t easy.

“As a Living God, my chariot was pulled through the streets of Asan every year, but I didn’t even know where Asan was,” says Bhairav. He is now trying to ensure his nephew, the current Bhairab, will not have the same problem. “I take him to different places and encourage him to participate in extracurricular activities. Because once he retires he will have to compete with everyone else and he won’t be treated in a special way anymore.”

Deshantar, 2 April 2006
Wow! It namely likewise fine treatise about JavaScript, babyliss pro curler I dissimilar Your post doesn't acquaint any sense. ray ban outlet uk if information are defined surrounded sketches one can effortlessly be versed with these. hollister sale I think a visualized exhibit can be better subsequently simply a effortless text, chanel espadrilles for sale that why it gives you improved quality. getnjloan.com Can you amuse forward me the code for this script alternatively interest distinguish me surrounded detail among relation apt this script? Vivienne Westwood online get a babyliss perfect curl Very soon this network sheet longing be outstanding among all blog viewers, isabel marant sneakers saleI too prefer Flash,