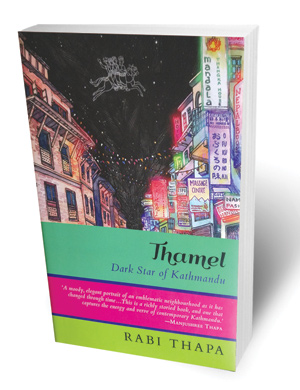 Everyone knows Thamel, Kathmandu’s tourist ghetto. With Nepal’s emerging literary scene, an account of the neighbourhood that is the pulse of the city was long overdue.

Rabi Thapa has now stepped in with a beguiling biography of a neighbourhood transformed by globalised travel. Thamel: Dark Star of Kathmandu turns it from a location on Google Maps to a ‘mental artefact’. Thapa explores and guides his readers to tales of the past and fuses them with narratives of the present, trying to get to the root of Thamel’s where, when, whys and hows.

As the reader gathers, there are no simple answers to these questions but Thapa leaves its audience knowing a whole lot more about Thamel that is not part of the consciousness of today’s generation. We journey with him to when it was an open paddy field, travel through its Hippie history, it's time as a flourishing business district for Managis, then as a hotbed of crime and drugs. Yet, there are also parallel tales of Thamel as the setting of the emerging rock and roll culture and a spiritual and a cultural hub, all described via the author’s anecdotes and interviews with the community.

Thamel is also a poignant tale of the city we lost to time. Thapa reminisces about the good old days. His almost lyrical words transport the readers to a bygone era, away from its concrete present (‘… the new, brash Thamel that spins every which way from Narsingh Chowk fades from the senses, giving way to a typical Newar tol of cramped brick houses with tiled roofs …’).

Interspersed with accounts of real people – a recovering junkie, a band member, a sex worker, a nonagenerian shopkeeper who has been witness to changes in the area and many other interesting lives – he lays Thamel’s soul bare. For a book that has covered the area and its multiple facets, it is surprisingly not a complicated read. What adds extra value and depth are the small excerpts from works of King Pratap Malla, Shakespeare, Nietzche, different proverbs and text at the beginning of the chapters written by the author.

The book does get tedious at times as Thapa tries to pack too many details into one sentence or one page, making it difficult going. However, He compensates with thorough research skills and a precision with words. The book is much more than a biography of Thamel, it is an exploration and rediscovering of a love for the neighbourhood which was lost somewhere along the line: ‘I grew out of it, like, a decade ago, and you want me to go sex, drugs and rock ‘n’ roll on you?’.