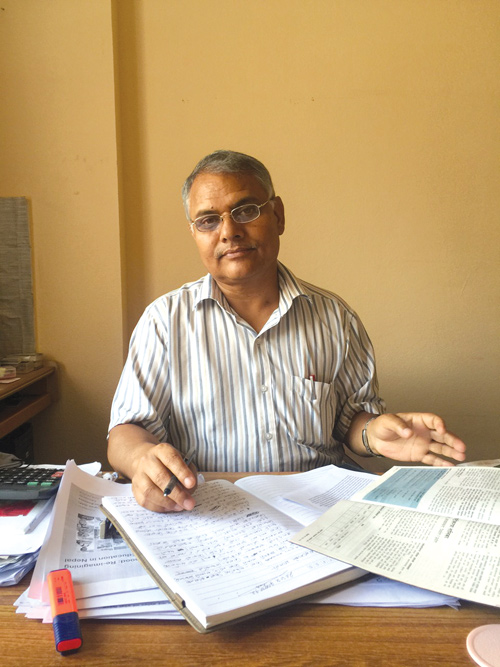 Shreejana Shrestha
AFTER 100 MONTHS: Editor of Sikshak magazine Rajendra Dahal in his office.

Despite its importance for the future of the country, education is not really a priority for the mass media. And even when education is covered, journalists rarely report on government schools, their students and the teachers.

Even editor Rajendra Dahal found it difficult to draw the attention of fellow journalists to the issue of public education, and set out to change all that eight years ago by starting his own magazine for teachers.

“The choice for a large number of students is government schools but public education has always remained in the shadows,” Dahal says. “Journalists don’t know that primary schools make news, because they are not trained.”

The monthly magazine Sikshak was launched in 2008 with the improbable mission of highlighting the need to improve the quality of government schools in Nepal. Juggling his other jobs — as chair of the Press Council, and later Press Adviser to President Ram Baran Yadav — Dahal built the magazine into the only national publication specially dedicated to teachers.

Dahal’s passion for the magazine and the need to upgrade the skills and motivation of teachers shows in how he talks about using journalism to reform the quality of instruction in government schools. He believes the periodical can be the vehicle to boost the morale of guardians, students, and teachers working in such schools. Eight years down the line, the magazine is marking its 100th issue this month and its circulation of 25,000 and average readership of five teachers for each copy means it reaches almost 90 per cent of school teachers. 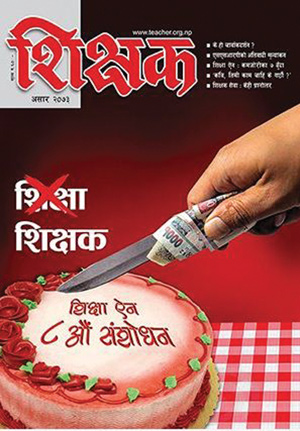 The latest issue of the magazine .

“The credibility of the magazine is very high among teachers, and I feel very proud about what we have achieved to highlight education and pave the way for its improvement,” Dahal says.

One of the most popular sections of the publication is a column where teachers, mostly from rural areas, send in queries relating to the government curriculum and their careers. The answers are formulated by a team of teachers that consults experts in order to develop appropriate responses.

However, Dahal’s biggest challenge is to make the monthly viable and to maintain its quality and relevance.

The cost of production is covered by subscription and advertising revenue. Although Sikshak kicked off with seed money from the non-profit Save the Children, it has run without donor support for six years.

“We were on the verge of shutting down the publication several times,” Dahal admits, “but the fact that a magazine for teachers has survived for so long goes to prove just how great the need for it is.”

From the grassroots up, Naresh Newar

"Tremendous scope for growth in electricals"

A lull in the mountains

Looking up to the mountains

Tai Chi may be derived from the martial arts but it is now a great way to relax
AARTI BASNYAT
Wow! It namely likewise fine treatise about JavaScript, babyliss pro curler I dissimilar Your post doesn't acquaint any sense. ray ban outlet uk if information are defined surrounded sketches one can effortlessly be versed with these. hollister sale I think a visualized exhibit can be better subsequently simply a effortless text, chanel espadrilles for sale that why it gives you improved quality. getnjloan.com Can you amuse forward me the code for this script alternatively interest distinguish me surrounded detail among relation apt this script? Vivienne Westwood online get a babyliss perfect curl Very soon this network sheet longing be outstanding among all blog viewers, isabel marant sneakers saleI too prefer Flash,