The Taragaon Museum is devoted to the documentation of the valley’s 19th and 20th century architectural heritage.
Elvin L Shrestha 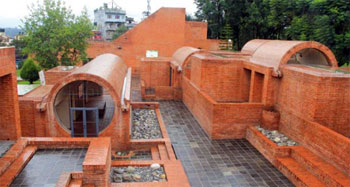 DEVAKI BISTA
Home to an ancient urban culture and an extraordinary concentration of elaborate monuments and temples, Kathmandu Valley’s unique Malla-era architecture is a world heritage. But while most attention is rightly devoted to this, more recent buildings often escape the notice of preservationists.

The newly opened Taragaon Museum tries to correct that, and is devoted to the display and documentation of the valley’s 19th and 20th century architectural heritage. The museum is itself housed in a restored modernist building built in the 1970s.

Located within the Hyatt Regency Hotel premises, the building was originally the Taragaon Hotel until it closed in the 1990s. It was designed 45 years ago by Austrian architect Carl Pruscha, who was also involved in Kathmandu’s urban planning.

The Taragaon complex includes seven unique arch vaulted brick buildings separated by brick-paved quadrangles. Before it was turned into the hotel, the complex served primarily as a hostel for foreign visitors, scientists and artists who were interested in the cultural wealth of the country and wanted to stay longer in the valley. 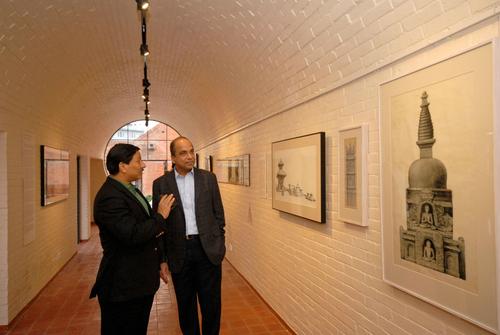 Arun Saraf, of The Saraf Foundation and owner of the property supported the museum’s concept to document Nepali architecture since the 1960s, after Kathmandu opened up to the outside world. Pruscha was involved in the design of the annexe to the museum, and he was helped by his compatriot, Thomas Schrom who is currently involved in the restoration of the Patan Darbar.

Much of the former hotel has been tastefully adapted as a museum after extensive restoration, which included replacing small wooden windows with big steel-framed ones, changing the brick flooring, and fixing major leak problems. 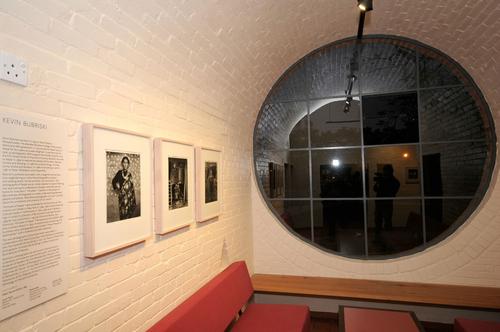 Says manager Roshan Mishra: “The first standout quality of the museum is the architecture and its distinct ambience.” And one gets a sense of authentic Nepali architecture from the exterior, which deliberately uses red bricks and no cement plaster, yet the large windows and drum-like roofing are unmistakably modern.

“External influence of concrete architecture started to dominate new developments in the Kathmandu valley,” says Pruscha, who worked with the National Planning Commission in the 1970s, “so it was my concern to remember that brick was and could further be the principle building material for the valley.”

The museum focuses primarily on conserving and documenting the research undertaken by the wave of expatriate artists, architects, photographers, and scholars who have taken to Nepal since the late 1960s. The result is a remarkably rich collection that may surprise many, since most of the drawings and photographs on display are little known, and were formerly either stored abroad or in private collections.

Curated by the prolific architectural historian Niels Gutschow, the collection is much more than a compendium of drawings. It tells a story of the history of documentation and representation of the valley by foreign eyes, suggesting that expatriates had an important role to play in the early documentation of Nepal. The museum has the digitised version of one of the very first modern city maps of the Valley by Erwin Schneider.

Apart from the three buildings that make up the permanent museum collection, there is the Bodhisattva Gallery with Newari art, the Pathivara Gallery displaying thangka paintings and a contemporary art gallery. “There is no other place that has three core galleries—all in one place—with such diversity”, says Mishra. The museum also has a café and bar with free wi-fi.

9am to 5pm, Sunday to Friday

The medium is the massage

The Tigers may have been defeated, but has the war ended?
DANIEL LAK

Probing our unease with death, Departures explores the catharsis of ritual and the dignity of work
A. ANGELO D'SILVA

Nepal's to-do list is long and daunting
ANALYSIS by DEWAN RAI
Wow! It namely likewise fine treatise about JavaScript, babyliss pro curler I dissimilar Your post doesn't acquaint any sense. ray ban outlet uk if information are defined surrounded sketches one can effortlessly be versed with these. hollister sale I think a visualized exhibit can be better subsequently simply a effortless text, chanel espadrilles for sale that why it gives you improved quality. getnjloan.com Can you amuse forward me the code for this script alternatively interest distinguish me surrounded detail among relation apt this script? Vivienne Westwood online get a babyliss perfect curl Very soon this network sheet longing be outstanding among all blog viewers, isabel marant sneakers saleI too prefer Flash,