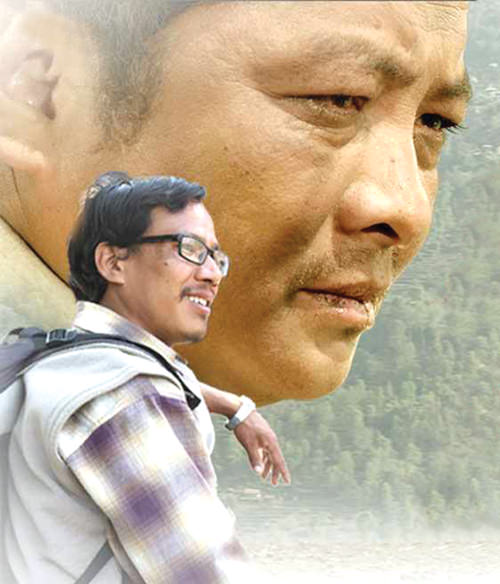 If there is one good thing that came out of the 10-year insurgency in Nepal, it is the movies that it spawned. Tsering Rhitar Sherpa’s Uma, Nischal Basnet’s Talakjung vs Tulke, Min Bam’s Kalo Pothi and Deepak Rauniyar’s White Sun are all examples.

What sets Taandro apart is that, unlike the other movies listed above, it is based on a true story. Directed by Samten Bhutia, Taandro is based on the book Smriti Ka Dobharu, by Ganga Bahadur Lama, a former Maoist cadre.

Lama, also known by his nom de guerre Koshish (played by Dayahang Rai) is the leader of a cultural wing of the Maoists. In 2003, while performing in a village in Lamjung, he is shot in the left leg during an army attack.

Lama spends 96 hours bleeding alone in a field on the edge of the village after getting separated from his comrades. None of the villagers are willing to help him, instead blaming the cultural team for the death of a woman killed by the army the previous night.

The film successfully portrays the views of Nepalis living in western Nepal regarding the Maoists and the insurgency. They are unwelcoming of the rebels, providing food and shelter only out of compulsion. The highlight of the film is when a young girl lies to the villagers and gives food and water to the injured guerrilla soldier.

The cast, most of whom have theatre backgrounds, do a wonderful job, but cinematographer Purushottam Pradhan fails to deliver, apart from the time-lapses, and the music doesn’t do justice to the movie.

Despite a good story, the director of Taandro fails in his visual treatment of the subject and in generating any sympathy from the audience for the lead character, who is shown as weak and often questioning the significance of the ‘people’s war’.

Despite those criticisms, by attempting to document an event of the war, Bhutia has set a new challenge for other directors. Taandro will also be a good resource for those looking to learn more about the war.

The disputed claims on the Indian border bunds tell one truth: someone is lying
Wow! It namely likewise fine treatise about JavaScript, babyliss pro curler I dissimilar Your post doesn't acquaint any sense. ray ban outlet uk if information are defined surrounded sketches one can effortlessly be versed with these. hollister sale I think a visualized exhibit can be better subsequently simply a effortless text, chanel espadrilles for sale that why it gives you improved quality. getnjloan.com Can you amuse forward me the code for this script alternatively interest distinguish me surrounded detail among relation apt this script? Vivienne Westwood online get a babyliss perfect curl Very soon this network sheet longing be outstanding among all blog viewers, isabel marant sneakers saleI too prefer Flash,