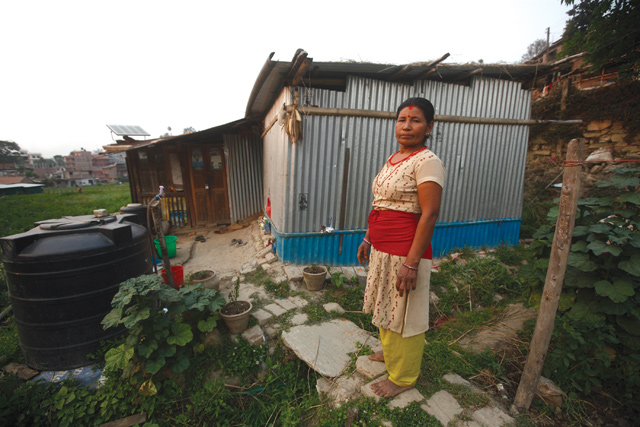 Pics: Gopen Rai
HOME: Since losing her home in the earthquake last year Nirmala Shrestha and her family have been sharing this rickety shelter in Bungamati. The municipality denied the Shrestha family a permit to rebuild their home in its original location because of a proposed road-widening plan.

Nirmala Shrestha clung to the tin roof of her flimsy temporary hut during a storm that lashed the Valley two weeks ago. “I was scared the wind would destroy the only shelter I had left,” she recalled. “I held on to the roof until it felt like my hands would also be blown away.”

Made homeless during the 25 April earthquake last year, the 48-year-old resident of Bungamati very nearly lost her home again. She has been living in this rickety shelter in her tiny farm on the southern outskirts of Patan for the past year. With no money of their own, and no help from the government, the family wanted to rebuild using salvaged material, but the municipality would not grant them a permit because of a proposed road-widening plan.

“It is becoming difficult by the day, we want to build a house but we face difficulties at every turn,” said Namrata’s husband, Devendra. “We don’t know what to do anymore. For the past year we have all been falling sick.”

Prime Minister K P Oli launched the government’s rebuilding campaign amidst much fanfare and speeches in Bungamati in January. But there is no sign of any reconstruction here. Like many across the 14 earthquake affected districts, families here have got little else besides the Rs 15,000 emergency grant last year. The Reconstruction Authority has started giving out the first installment of the Rs 200,000 rebuilding grant, but only in Dolakha district.

“We don’t live in the houses that were destroyed, but are still asked to pay for the electricity, water, phone bills. If we don’t, they say they will not provide us with any when we rebuild,” says Ratna Man Maharjan, also a resident of Bungamati. Having lost his shop along with his house, he is operating from a makeshift one close to his temporary shelter.

Across the Valley in Sankhu, another historical town flattened by the earthquake, residents are desperate to move into more permanent structures, but will probably have to rough it in flimsy huts for at least another year.

“Who wants to live in a place infested with mosquitoes and flies? Why don’t they just give us the money so we can start building?” asks Sanu Laut who has a seven-year-old daughter and a diabetic husband. They sold their tractor, but all the money went into paying her husband’s medical bills.

In Bhaktapur Narayan Man Bijukchhe of the Nepal Workers and Peasants Party has been pressuring Prime Minister K P Oli and the Reconstruction Authority to hand over responsibility for reconstruction to local bodies. In fact, this is the only part of Kathmandu Valley where the government has been proactive in rebuilding heritage sites and fallen neighbourhoods. 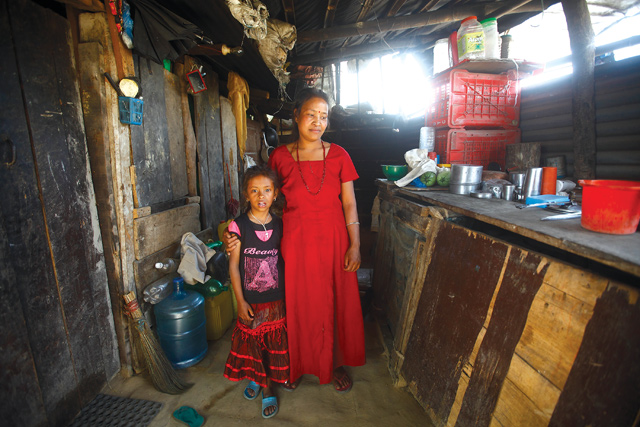 Sanu Laut and her seven-year-old daughter inside their flimsy hut in Sankhu. The family is desperate to move into a more permanent structure, but don't have the money to build one.

After blistering criticism for its inaction, the Reconstruction Authority this week lifted the ban on voluntary groups from rebuilding. “The move will certainly speed up the process of reconstruction,” said Aanand Mishra of creasion.org which has helped rebuild four permanent schools in Dhading, Nuwakot and Sindhuli. The organisation is also building 55 model homes in Lalitpur.

Earlier, the Authority had justified the ban citing the need for regulation and coordination, but was under pressure from survivor families as well as NGOs to be less of a hindrance. But many in Sankhu and Bungamati are now so desperate they won’t wait for government permission or money.

“I went ahead after I got an informal permission from the municipality. Besides, what is the point waiting for those two lakhs, it won’t even pay to rebuild a room,” says Manoj Shakya, 51 in Bungamati.

In Sankhu, Balram Shrestha has also decided to rebuild on his own with a Rs 1 million loan. He said: “It was getting too difficult, and I didn’t feel safe in my damaged house, and since there was no government here I decided to build a safe house on my own.”

Sick of the Cold by Dambar K Shrestha

Aparanha, 11 February
Interview with Narahari Acharya of Nepali Congress
Wow! It namely likewise fine treatise about JavaScript, babyliss pro curler I dissimilar Your post doesn't acquaint any sense. ray ban outlet uk if information are defined surrounded sketches one can effortlessly be versed with these. hollister sale I think a visualized exhibit can be better subsequently simply a effortless text, chanel espadrilles for sale that why it gives you improved quality. getnjloan.com Can you amuse forward me the code for this script alternatively interest distinguish me surrounded detail among relation apt this script? Vivienne Westwood online get a babyliss perfect curl Very soon this network sheet longing be outstanding among all blog viewers, isabel marant sneakers saleI too prefer Flash,