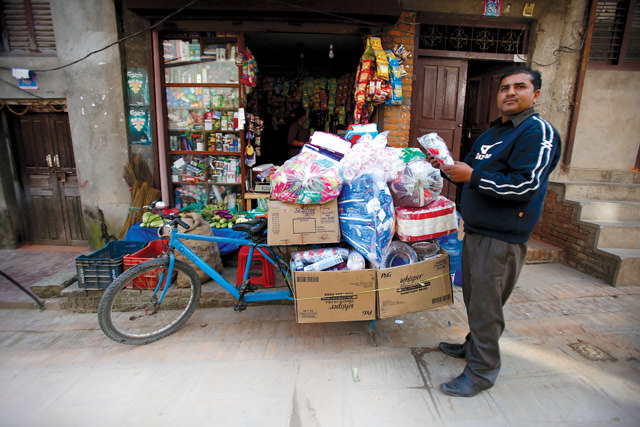 Are you a local entrepreneur pondering an auto loan? Forget it, says a local bicycle maker, who believes his machines can do the job for you.

“Portal is a social business on a mission to develop the world’s most innovative and adaptable bicycles that transform lives and power businesses,” says Spear, who made his first cargo bicycle by hand in 2004 for his own use in Kathmandu.

A successful bicycle entrepreneur in the United States, he says businesses can use human pedal power to make deliveries while families make them a part of their daily chores and even to deliver children to school. One bike can carry over 150kg of cargo, excluding the driver. Spear moved to Nepal in 2013 with an aim to introduce innovative bicycles to transform peoples’ lives.

Portal Cargo cycles are available in ‘long-tail’ and ‘mid-tail’ and come standard with seven gears, front disc brakes, extra strong wheels, and heavy-duty parts and components. The parts are imported from Taiwan and the bikes assembled in Nepal. Both versions of the cargo bikes sell for Rs 32,500.

Dustin Alarid, administrative director at Portal Cargo Bikes told Nepali Times he believes the venture can have a major impact in Nepal: “Cargo bicycles are essential for people who can’t afford motorbikes. They are an affordable first vehicle for businesses.” Aftyer his master’s degree in Development Studies from Kathmandu University, Alarid joined Spear to launch Portal Cargo Bikes.

Bharat Prasad Koirala, a entrepreneur in Chakupat , Lalitpur uses the bicycles to transport products: “This cargo bike is equivalent to a delivery van for me since I can make multiple deliveries in a day.”

Koirala is one of the first to deploy the cargo bike since the pilot project in 2014 to supply sanitary pads, napkins and kitchen items to shops located along narrow alleyways. “My business increased compared to the time when I was using Indian bicycles. This bike is much more suitable for small scale businesses like mine to transport goods,” he adds.

The cargo cycle has another unique feature: it can power a grain thresher, sheller or grinder – ideal for farmers who can use the multi-purpose pedal power on the farm as well as to transport the produce to market. The devices can be attached to the transmission wheel and powered by pedalling. The cycle has a motorcycle-style kickstand so riders can also sit on the bike when it is stationary.

Portal Cargo Bikes plan to open a showroom in Narayanghat targeting the Tarai market in 2018, and to start focusing on exporting the cycles in the longer term. Currently, the company works out of its showroom in Jhamsikhel, where potential customers can take the bikes out for a test spin.

The struggle for dignity

A caste struggle is on in the village of Melauli, and the Dalits are pitting their collective strength against an oppressive social order.
PREM SINGH NAYAK and RUPA JOSHI

Sri Lankas formerly virulent Maoists have renounced violence and become kingmakers in parliament. A lesson for our own comrades?
DANIEL LAK
Wow! It namely likewise fine treatise about JavaScript, babyliss pro curler I dissimilar Your post doesn't acquaint any sense. ray ban outlet uk if information are defined surrounded sketches one can effortlessly be versed with these. hollister sale I think a visualized exhibit can be better subsequently simply a effortless text, chanel espadrilles for sale that why it gives you improved quality. getnjloan.com Can you amuse forward me the code for this script alternatively interest distinguish me surrounded detail among relation apt this script? Vivienne Westwood online get a babyliss perfect curl Very soon this network sheet longing be outstanding among all blog viewers, isabel marant sneakers saleI too prefer Flash,