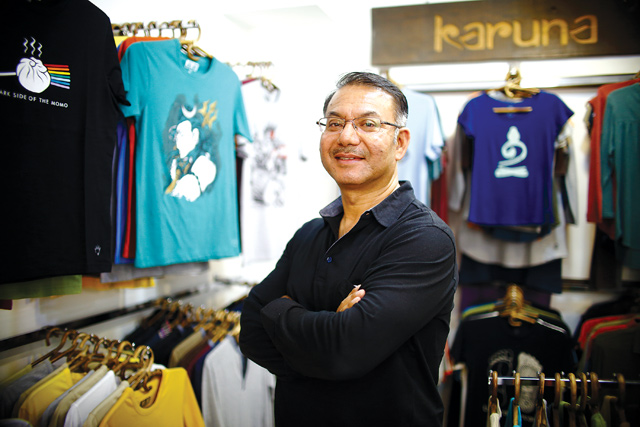 Businessman Pradip Man Shakya has always trusted his instincts. Although he graduated in Fine Arts from Lalit Kala Campus, his intuition guided him to launch Shraman Apparel, a garment business, in 1990.

Shakya’s sixth sense boded him well. In over two decades the company has proliferated and spun off two popular clothing lines: Karuna Natural Wears and Juju Wears. This year Shraman celebrates its 27th anniversary and the man behind it could not be more elated.

“I always felt the urge to make something out of my life,” said Shakya. “Once I found it, I didn’t let go.”

When the entrepreneur established Karuna in 2006, he hoped to encourage Nepalis to try clothing made here. Minimalistic, comfortable, a brand ahead of its time, Karuna uses natural fibres like hemp, bamboo and nettle to make tops, pants, shirts and T-shirts. Today, the line has expanded to include leather belts, wallets and even bamboo underwear. 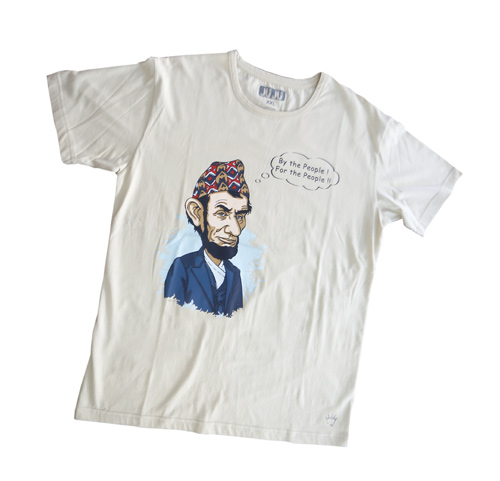 “A T-shirt is a statement, it inspires not only those who wear it but those who see it too,” said Shakya.

The businessman ran a factory in the 1990s with 500 workers, exporting to GAP and Walmart. “I knew nothing then, it was all learning by doing,” said Shakya.

By 1995, he felt the urge to promote clothes made in Nepal. He flew to Japan with some samples and came back with an order worth $9,000. There was no looking back. In 1997, Shakya created Karuna and started exporting to countries like France and Japan. By 2006, he opened his first store in Darbar Marg under the same label.

By then, most of his garment contemporaries had closed shop following the political turmoil, and moved on. But Shakya stood his ground. “I couldn’t jump to another business, I kept on with it,” said the 56-year-old who, with the support of his export business, found it easier to sustain his venture.

He still remembers how those entering his Darbar Marg store grimaced, mumbling grievances about how expensive the Nepali brand was. Disregarding them, Shakya adamantly continued.

He sees a stark contrast between then and today, when demand for products made in Nepal is growing. The driving factor, Shakya feels, is consistency. “They valued our quality, and kept coming back for it,” said the entrepreneur, who sees to it personally that quality is not compromised. He is involved in every stage, from creation of the designs to release of the final product. Shakya sources fabrics from Sankhuwasabha, Bhaktapur and a vegetable dying venture in Kakani, and raw fabrics and threads from India and China.

Following the success of his Karuna store in Kathmandu, he recently opened an outlet in Pokhara. Juju already has two stores in the capital, and Shakya says sales are increasing 25-30 per cent a year. Recently, the company opened a Karuna showroom in Canada, and sent 200 pieces of Juju T-shirts to Australia and Hong Kong.

Fixed on his office wall is a sample of a new design with a quote from Abraham Lincoln that perfectly summarises his vision for tomorrow: “The best way to predict the future is to create it.”

Chandra Prasad Gajurel of the Communist Party of Nepal (Maoist) in Janadesh, 7 December

"The solution is a good economy."

Harinder Singh is the new general manager at the Hyatt Regency
Wow! It namely likewise fine treatise about JavaScript, babyliss pro curler I dissimilar Your post doesn't acquaint any sense. ray ban outlet uk if information are defined surrounded sketches one can effortlessly be versed with these. hollister sale I think a visualized exhibit can be better subsequently simply a effortless text, chanel espadrilles for sale that why it gives you improved quality. getnjloan.com Can you amuse forward me the code for this script alternatively interest distinguish me surrounded detail among relation apt this script? Vivienne Westwood online get a babyliss perfect curl Very soon this network sheet longing be outstanding among all blog viewers, isabel marant sneakers saleI too prefer Flash,