The height of sacrifice 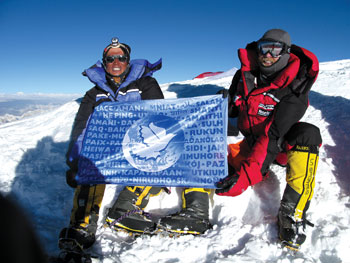 COURTESY PEMBA GYALJE
ON A HIGH: Pemba Gyalje Sherpa on the summit of K2 with his climbing partner Gerard Mcdonnell, who died on the descent.
American climber and author Freddie Wilkinson’s book One Mountain Thousand Summits: The Untold Story of Tragedy and True Heroism on K2 pieces together an accurate account of the 2008 tragedy on the world's second highest peak. The book is replete with dramatic rescues and selflessness as narrated by two Nepali survivors, Pemba Gyalje Sherpa and Chhiring Dorje.

At 8,611m, K2 is described by mountaineers as ‘savage mountain’ or ‘killer peak’. One in four climbers who have attempted the summit over the years, never made it back. The story of the 2008 K2 expeditions has also been told in Buried in the Sky by Peter Zuckerman and Amanda Padoan where Chhiring Dorje rescues fellow-Nepali Pasang Lama.

In 2008, a medley of climbers from Italy, Netherland, United States, Serbia, South Korea, Denmark, France, Norway, among others, set out from high camp for the summit. Disaster struck on their way down the notorious Bottleneck, where icefalls had swept away the fixed ropes, leaving 12 climbers returning to Camp IV stranded in treacherous, avalanche-prone terrain.

The unfolding high-altitude drama was breaking news for the international media. In the rush to be first, half-baked and sensationalised news reduced the event to mountaineering clichés and it was compared to the 1996 Everest disaster chronicled in Into Thin Air. The climbers were portrayed as irrational and irresponsible, ill-equipped to tackle the challenge.

Wilkinson interviews European and Nepali survivors and pieces together what happened. A topnotch climber and guide himself, Wilkinson does justice to the topic by going where the story takes him. He interviews the families of the climbers who perished as they speak of the dreams and motivations of their relatives. 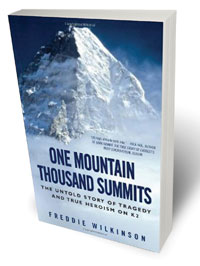 One Mountain Thousand Summits: The Untold Story of Tragedy and True Heroism on K2 by Freddie Wilkinson

One Mountain Thousand Summits delves deep into the history of modern mountaineering from the Industrial Revolution to the British ‘conquest’ of Mt Everest in 1953. The spread of the global mass media coincided with this spirit of adventure, and Wilkinson chronicles the competition in the media to sell the story ever since the first successful expedition to North Pole. There was a similar media frenzy after the first ascent of Mt Everest, and coverage of expeditions has been staple fare for international news agencies based in Kathmandu.

It was no different when Sherpas and European alpinists came to blows at Camp II two years ago, when an avalanche on the Khumbu Ice Fall killed 16 Nepali high altitude workers and blizzards on Annapurna killed 39 trekkers last year. Yet when three Nepali women climbed K2 last year, it didn’t really make any international headlines. Wilkinson’s book is as much a chronicle of the fateful two days on K2 as it is a critique of the new media menu and how it mishandles disasters.

Everest’s first known victims were Sherpas: in 1922 seven Sherpas died in an avalanche while approaching the North Col. This perhaps underscores the risks inherent in mountaineering expeditions. Besides Pemba Gyalje and Chhiring Dorje, who emerge as the K2 heroes Wilkinson also talks about Jumik Bhote and Pasang Bhote, two Sherpas from Rolwaling region who died helping rescue members of the South Korean expedition.

While Wilkinson puts K2 in the context of mountaineering and the evolution of Nepal’s Sherpa people as professional mountaineers, his account of contemporary Nepali history disappoints the reader. The Maoist insurgency and royal massacre are treated a bit simplistically, and his poor grasp of Nepal’s history is a drawback.

Gerard Mcdonnell, the first Irish to summit K2 and a friend and climbing partner of Pemba Gyaje, is given ample space: from his passions for climbing and wilderness to the life in Alaska, while we get to know very little of the South Korean climbers. Aside from these quibbles, the book is a comprehensive and nuanced account of the tragedy on K2 and the extraordinary courage shown by the Nepalis involved.

“Another big accident is a matter of time” 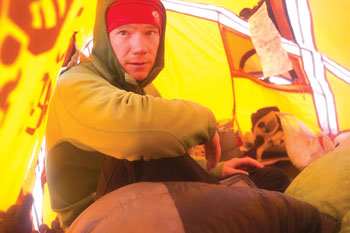 Why did you decide to write the book?

They say history is written by the victors, and the history of high altitude mountaineering has been almost entirely written from the perspective of the foreign climbers who visited the Himalaya to climb and explore. When disaster struck on K2 in 2008, the media focused on the accounts of several western survivors -- but these guys, by their own admission, were so exhausted and focused on their personal survival they had incoherent memories of what was happening around them. I realised that the only way to really understand what happened would be from the perspective of the Nepali climbers who were there.

What’s the lure of the world’s second highest peak?

K2 used to be one of the biggest challenges in mountaineering -- it’s a beautiful mountain, steep and unforgiving. The lure of climbing such a mountain is the same as any complex and risky long-term undertaking: there are logistical challenges, physical and mental challenges, and it takes many months or years to realise the dream of standing on the summit.

It’s been six years since the tragedy on K2. Do you think any lessons have been learned from the disaster?

As an alpinist, I personally feel it’s inappropriate to attempt any mountain if you lack the skills to fix the ropes and establish the route yourself. Yet the normal routes on all of the 8,000 meters, including K2, are busier than ever, and the vast majority of climbers on these routes are totally reliant on commercial infrastructure to survive. Sadly, I think that under these circumstances another big accident is just a matter of time. The most productive thing the climbing community can do is focus on providing better training and support for Nepali and Pakistani mountain guides.

In the chapter called "Death in the Information Age", you write on how media’s hunger for instant story often leads to distortion of facts and misinformation. How can mountaineering journalism be more nuanced?

Mountaineering is an incredible sport in that it brings together people from many different cultures and backgrounds, often in serious, life-or-death situations. At its best, mountain journalism should strive to understand these people -- who they are, their goals, their backgrounds and the cultural baggage they carry with them to the mountains.

What’s the future of mountaineering for a country like Nepal? What’s your suggestion on reforming the sector?

I firmly believe that lasting change can only come from the local community itself — it can’t be implemented by a bunch of well-meaning but misguided foreigners. Still, it would be great to see the Government re-invest a majority portion of the annual revenue from peak fees to create a disaster relief fund as well as more professional educational opportunities. I also think the liaison officer system should be completely overhauled to form a group of mountain rangers, and an independent search and rescue call center needs to be established. As we saw after the avalanche last spring, there are many business owners, trade organisations and government officials who try to speak on behalf of those working in the mountains. Real change will only happen when the Nepali mountain community can find a way to effectively organise and speak for itself.

The risk and reward

Pemba Gyalje Sherpa, 41, has climbed Mt Everest six times, but is little known outside the close-knit Sherpa and mountaineering community. After the K2 disaster he was hailed as a hero for his daring and selfless rescue mission. National Geographic named him Best Adventurer of 2008 and featured him in its cover of the year-end issue. Pemba also starred in the documentary, The Summit. 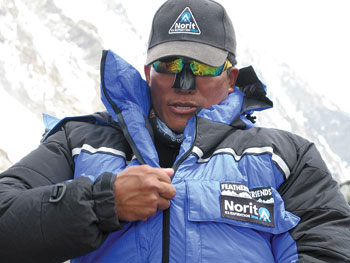 What do you remember of what happened that day on K2?

Pemba Gyalje Sherpa: It was an unfortunate incident. My mind is flooded with sad memories. The climbers got stuck on their descent after the summit, there was no way they could descend. Some of them were swept away by avalanches and others fell to their deaths.

How has the tragedy changed your life?

It was the biggest incident I have experienced on any mountain. I learned a lot from the tragedy. What happens when people from different background and culture with varying degree of climbing skills climb at high altitude. How people’s capacity to make right decisions is impaired. I learnt how despite best efforts, one cannot control what happens high up on a mountain. I feel that I was lucky to survive it. I was in the best physical shape, which is why I could do the rescues. You have to be physically and mentally fit, and prepare well in advance to climb.

How have the lives of the Sherpas changed by mountaineering?

Earlier, high altitude mountaineering was considered an elite profession. Only those with technical skills and physical strength were drawn to it. But things have changed now. The perception is that anyone can do it. Generations of Sherpas have been employed in this sector. Many are drawn by economic benefits, others may be attracted by the thrill of it or some simply wanted to be there on the mountains. The risk is always there, you have to know how much you can take.

But how do you reconcile those risks with the rewards of high altitude work?

Ours is a country where hard work is neither respected nor rewarded. We have a tendency to devalue and under-appreciate labour. Commercial mountaineering is run by foreigners as a business. Most climbers are foreigners so the business is under their control. It’s natural, because the idea of mountaineering is a western import. We, on the other hand, are service providers. We don’t do marketing, we don’t look for clients. Very little of mountaineering dollars trickle down to us. So it’s natural that we will suffer from this model. More dangerous than avalanches is how the budget for an expedition is sorted out. If you don’t offer enough pay, experienced and skilled guides may not come on board. Less budget also means low quality gears and equipment, which ultimately hurts safety.

What’s the future of Everest in the wake of cancellations last spring?

It was sad that expeditions got cancelled, but Everest will always be there. Expeditions on the Nepal side will continue to grow. We need to manage our mountains better and ensure safety. We must spread the message that we are well prepared for commercial expeditions.

Everest’s spring is over, Matt Miller

Meteor showers, mighty Jupiter and the Hunter's Moon
KEDAR S BADU
Wow! It namely likewise fine treatise about JavaScript, babyliss pro curler I dissimilar Your post doesn't acquaint any sense. ray ban outlet uk if information are defined surrounded sketches one can effortlessly be versed with these. hollister sale I think a visualized exhibit can be better subsequently simply a effortless text, chanel espadrilles for sale that why it gives you improved quality. getnjloan.com Can you amuse forward me the code for this script alternatively interest distinguish me surrounded detail among relation apt this script? Vivienne Westwood online get a babyliss perfect curl Very soon this network sheet longing be outstanding among all blog viewers, isabel marant sneakers saleI too prefer Flash,