The new issue of Otaku Next boasts a better design, layout and art
Sahina Shrestha 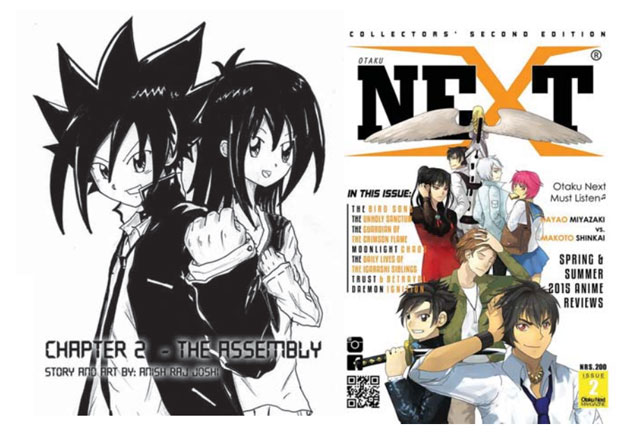 Japan’s cutting edge pop-culture has earned fans from all around the globe and Nepali youths are no exception. The manga-verse in Nepal is becoming more popular, and catering to the country’s young crowd is a home-grown manga magazine, Otaku Next. After receiving a warm welcome for its debut issue, released in December last year, the second issue was launched at a cosplay event last month.

The new issue of Otaku Next boasts a better design and layout. These improvements are evident right from the cover (pic) of the new issue, which ditches the boring plain blue cover for a series of manga characters against a white backdrop, befitting a manga anthology. The editors have also swapped the handwritten font used in the last issue for a computerised font, giving a cleaner and clearer look.

Three ongoing mangas, Wind Walkers, Demon Ignition and Moonlight Chaos, make a comeback along with five new series: The Bird Song, The Daily Lives of the Igarashi Siblings, The Guardian of the Crimson Flame, The Unholy Sanctum and Trust and Betrayal.

Demon Ignition is an action series by Anish Raj Joshi that revolves around the soul survivors, a group of people who are able to see demons and who also have the power to seal them. The series picks up pace in the latest issue. Not only is the art better but the author gives enough room for character development. By the end of the second chapter, the reader gets a good idea of who the characters are as well as a general feel for the overall storyline. The other two continuing series, Moonlight Chaos and Wind Walkers, would do well if they focused a little more on character development and the flow of the story, respectively. But then again, it may require reading beyond the second chapter to expect everything to fall into place.

The newer entries - The Unholy Sanctum by Rasik Rai and Bikin Ghimire and The Bird Song by Ksaurus - look promising. In the former, two friends are thrown into a virtual world where an experiment with reality goes haywire. But we don’t know yet, it is just the first chapter. The Bird Song introduces a little girl Mari who is ill, living in a hospital deep in the woods, and who loves hearing stories about the Birdkins, mystical creatures who look like humans, but with wings, and who are said to cause the death of all those who hear them sing.

Sandip Rai’s story, Trust and Betrayal, was published in the last issue and has been turned into a manga with Pranisha Gurung’s art in the latest issue. The manga’s storyline stays close to the original story.

To be sure, there are definitely some shortcomings in the mangas artwork and storylines but, considering that the mangakas are just starting out and that most, if not all, of them have to juggle between drawing and writing the manga and keeping up with their schoolwork, what they have achieved is commendable.

The editors need to pay attention to details and maintain consistency in the reading styles. For the series Wind Walkers and Demon Ignition, the reading style has been changed from right-left in the first issue to left-right in the latest issue. Whether this is deliberate or accidental, it can confuse the readers. And while all eight series are heavily influenced by Japanese manga, it would have been nice to have a Nepal-based manga for a change.

Cautious optimism is all that the Geneva MoU deserves
CK LAL

The crackdown and after

The only voice that speaks without government censorship comes clandestinely and illegally over an FM band
DANIEL LAK
Wow! It namely likewise fine treatise about JavaScript, babyliss pro curler I dissimilar Your post doesn't acquaint any sense. ray ban outlet uk if information are defined surrounded sketches one can effortlessly be versed with these. hollister sale I think a visualized exhibit can be better subsequently simply a effortless text, chanel espadrilles for sale that why it gives you improved quality. getnjloan.com Can you amuse forward me the code for this script alternatively interest distinguish me surrounded detail among relation apt this script? Vivienne Westwood online get a babyliss perfect curl Very soon this network sheet longing be outstanding among all blog viewers, isabel marant sneakers saleI too prefer Flash,