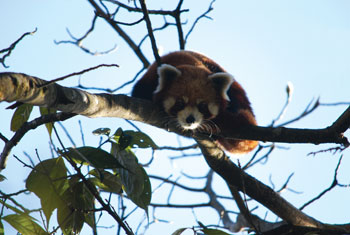 PICS: SONAM TASHI LAMA
RED ALL OVER: This red panda in Ilam district is part of a clan protected by a local community forestry group.
Despite being regarded as sign of good luck and having a cuddly appearance, the red panda is facing an existential threat. Worried about their dwindling numbers, an international effort has been successful in mobilising local communities in eastern Nepal to save the species.

Known as habre in Nepali and punde kundo in the local dialect here in the mountains near  Kangchenjunga, this is a carnivore-turned-herbivore that, like its distant cousin the giant panda, survives mainly on a diet of bamboo.

The shy animal lives on the canopy of broadleaf and mixed temperate forests from central Nepal right up to Sichuan, and is an excellent tree-climber. Habitat destruction and hunting has reduced its numbers to 10,000 individuals in the wild, and in Nepal there may be only up to 1,000 red pandas spread across 36 mountain districts. There is said to be another 800 in zoos around the world.

The red panda is listed under Appendix I of CITES, the Vulnerable Category in the IUCN Red List and categorised as a protected mammal by the National Park and Wildlife Conservation Act, 1973 of Nepal which prohibits its killing or capture dead or alive. Yet, last year alone 11 red panda hides were confiscated in Nepal.

While red panda inside national parks are protected, now communities in Nepal’s eastern districts of Panchthar, Ilam and Taplejung  which are not part of any nature reserves, and home to one-fourth of the total red panda population in Nepal, are working to protect the species from poachers and habitat loss. 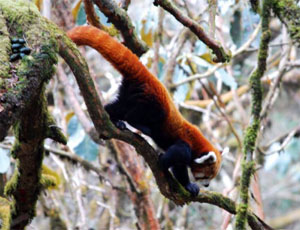 Red panda at its defecation site. The animals are very hygenic and use the same neighbourhood toilet.
The Community Based Red Panda Monitoring and Conservation under the Red Panda Network (RPN) has been working since 2007 to mobilise local awareness and action to protect the endagered animals through habitat management, awareness building and sustainable livelihoods.

A lot of the credit for red panda research goes to pioneer conservationist Pralad Yonzon, who did his PhD on the red panda in Langtang National Park. His organisation, Resource Himalaya, worked on the conservation of the animal’s habitat, but Yonzon died tragically in 2011 when a truck hit his bicycle in Kathmandu.

Local people trained as Forest Guardians act as conservation ambassadors in their community, and protecting the red panda habitat means saving other species as well. This unique community based initiative is being instutionalised within Nepal’s successful Conmmunity Forest User Groups.

In Jamuna VDC of northern Ilam, local women are at the forefront of conserving the red panda in the Choyatar Forest which had been decimated by grazing and logging.

The red panda range stretches across from Nepal to Sichuan in southern China.

Their work has already yielded results: the number of tourists visiting the area has increased in direct proportion to the rebound in the population of panda. Red panda watching has now become a major source of  tourism revenue, and homestays have taken off.

Besides Ilam, the red panda is also found in conservation areas and national parks in Langtang, Sagarmatha, Annapurna and Rara. This year, Nepal celebrates Red Panda Day on 20 September with the slogan Conserving Locally, Educating Globally.

Back to the jungle, Nirmal Ghosh

Bardiya reaps rewards from Chitwan resort closures
SURESH RAJ NEUPANE in BARDIYA
Wow! It namely likewise fine treatise about JavaScript, babyliss pro curler I dissimilar Your post doesn't acquaint any sense. ray ban outlet uk if information are defined surrounded sketches one can effortlessly be versed with these. hollister sale I think a visualized exhibit can be better subsequently simply a effortless text, chanel espadrilles for sale that why it gives you improved quality. getnjloan.com Can you amuse forward me the code for this script alternatively interest distinguish me surrounded detail among relation apt this script? Vivienne Westwood online get a babyliss perfect curl Very soon this network sheet longing be outstanding among all blog viewers, isabel marant sneakers saleI too prefer Flash,