“We were delivery-focused from day one”

Kuntoro Mangkusubroto, who led a complex reconstruction effort in Aceh-Nias, the region devastated by tsunamis and earthquakes from 2005 to 2009 shares his experience 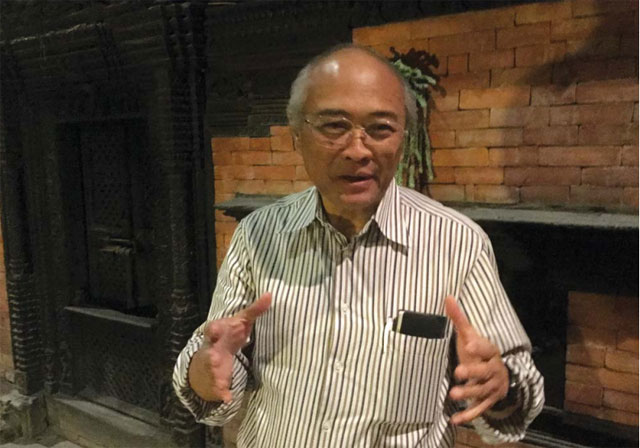 Kuntoro Mangkusubroto led a complex reconstruction effort in Aceh-Nias, the region of Indonesia that was devastated by tsunamis and earthquakes, from 2005 to 2009. Excerpts from his conversation with Ashutosh Tiwari:

Nepali Times: What have your observations been on the pace of Nepal’s formal reconstruction efforts?

Kuntoro Mangkusubroto: I do not know Nepal’s geography and culture well, but given the devastation caused by the earthquakes, I am surprised that things seem peaceful here. After meeting with government representatives, I did not get a sense of urgency, that “let’s forget everything else and concentrate on rebuilding” attitude. If this happened in Indonesia, there would be thousands of people outside shouting and making our lives miserable. Maybe Nepalis are too nice.

Speaking of urgency, how did you approach the reconstruction work in the Aceh-Nias area?

I made some good decisions. First, I left Jakarta and moved to the affected area with my family. By living in the community, I saw that new problems came up all the time but I was also able to deal with issues right away. This reduced surprises and uncertainties and sped up the recovery work.

We also planned as we proceeded, there was no master plan. We did not wait for perfection. We started building houses, without worrying about mistakes, which we knew we could fix later. We said that each house should be built to withstand a seven magnitude earthquake, and that it had to cover an area between 36 and 54 square meters. These broad guidelines worked.

Because we were delivery-focused from day one, we were soon able to point to what we built instead of merely talking about what we were planning to do. If we had not delivered, we would not have been able to protect ourselves against criticism or show that we were on the right track.

How did you work with such diverse stakeholders -- community groups, countries, donor agencies, NGOs, contractors?

We had them write a concept note in which they had to explain what they would do, where the money would come from, how they would procure materials, and how they would staff the projects. That note was then vetted by local villagers, who decided what got built where. Sometimes, I had to step in to make the final decision, but once the concept note was turned into a village plan – with input from the villagers - it was time to start rebuilding that village.

Since the villagers helped plan, conflicts related to land disputes were minimised. Donor agencies and NGOs that wanted to rebuild had to go through this process, which streamlined coordination.

I don’t know about Nepal’s specific context, but in Indonesia, we treated NGOs and donor agencies as friends and partners. After all, we could not have completed all 12,000 projects without help. At the same time, countries and agencies had to follow our community-driven procedures. Singapore, for instance, built a port. Spain built a hospital. We made it easier for them and others to help us. This might have been an unorthodox approach, but in times of emergency, knowing how to harness international goodwill reduces pain and makes the work go faster.

How did you assure donors who had made pledges that funds would be used well?

Pledges are political statements made by donor countries at conferences. Once you have formed a reconstruction agency, you ask donors for money. The longer you take to ask for money, the less interested the countries are in giving it. The first thing they want is no corruption. If you cannot guarantee corruption-free deliveries, your government should not get involved in your work except for to provide oversight at the highest level. And you certainly do not want to do conditional cash transfers because they are easily abused.

In our case, the donors did not trust our system and so we assured them that we would not integrate their money into our national budget. Instead, we created a Multi Donor Fund (MDF), with a steering committee composed of ambassadors and heads of agencies. I was the sole government official on that committee, which met monthly to make decisions about the money. International auditors and banks were involved. All of this helped assure donors that their money was being used productively.

How did you measure the success of your work?

We used Millennium Development Goal indicators. The maternal mortality rate in Aceh-Nias is lower than that of the whole country. The percentage of children aged nine to twelve enrolled in school is higher than the national average. Indicators of poverty and unemployment are lower than they were before the disaster. There are no conflicts in villages. Our bottom-up approach appears to have worked well.

Something to think about: the Federation of Nepali Businessmen in Politics
ARTHA BEED

"The dog ate my homework,"need not be an excuse anymore.
JUTTA PILGRAM IN MUNICH
Wow! It namely likewise fine treatise about JavaScript, babyliss pro curler I dissimilar Your post doesn't acquaint any sense. ray ban outlet uk if information are defined surrounded sketches one can effortlessly be versed with these. hollister sale I think a visualized exhibit can be better subsequently simply a effortless text, chanel espadrilles for sale that why it gives you improved quality. getnjloan.com Can you amuse forward me the code for this script alternatively interest distinguish me surrounded detail among relation apt this script? Vivienne Westwood online get a babyliss perfect curl Very soon this network sheet longing be outstanding among all blog viewers, isabel marant sneakers saleI too prefer Flash,