Political cartoonist Rajesh K.C. saw the opportunity to transfer his wit from text to textile when his friends first approached him to design T-shirts three years ago.

“Cartooning is my skill and I’ve converted it into my profession, now it’s my business,” said Rajesh.

KC’s brand of T-shirts 'Phalano Luga' is the namesake of the protagonist in his political cartoons, Phalano. Since the opening of his first store in Sundhara in July 2013, he has created over 200 different designs ranging from creative drawings of the Nepali flag to witty catchphrases and colloquialisms.

Just like his cartoons for Phalano, Rajesh draws on latest happenings in Nepali culture, society and politics to create his T-shirt designs for 'Phalano Luga'. That is why he describes them as “full of Nepali flavour”.

However, unlike his political cartoons which gained popularity quickly, his clothing line has yet to gain traction beyond the market of his loyal readers that make up about 90 per cent of his clientele.

“My readers trust and like my cartoons that is why they want to wear my designs,” said Rajesh who was inspired by RK Laxman, a cartoonist for The Times of India.

Yet, Rajesh still has aspirations of expanding his brand 'Phalano Luga' in and outside of Nepal, and hopes to open stores in India, Malaysia and even Dubai.

This determination to create a unique brand is why he has opened a second store in Pulchok. With a striking mustard yellow and green coloured storefront, the Pulchok branch has had better luck with customers than the outlet in Sundhara. 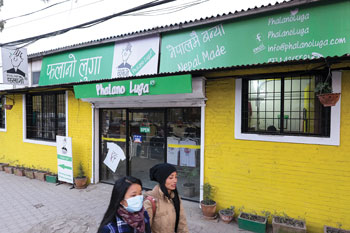 PICS: KENJI KWOK
According to sales assistants, about 15 to 20 customers frequent the Pulchok store on busy mornings, with more streaming in after work at night.

Rajesh reveals that he taught himself how to run a business before he opened his first store. He had learned the economies of scale of business when he started to mass print his shirts. “It’s expensive to print one shirt alone, but there is a reduction in business costs when you print more shirts at one go,” he said.

The self-taught businessman may follow the rulebook on brand differentiation and cost-profit margins, but he also had a few unorthodox beliefs up his sleeves.

He said: “Although the store in Sundhara is not making profit, I give off the impression that the brand is doing well by opening more stores. Then, maybe more customers will start to take notice and buy from me.”

In addition, the entrepreneur believes that there is potential to create a uniquely Nepali brand internationally. "Phalano Luga is distinctly Nepali. Any Nepali living abroad who hears of the brand Phalano Luga will be able to tell that it is from Nepal,” quipped Rajesh.