Skydive in Pokhara amidst the stunning backdrop of Machapuchre and the Annapurnas.

When I first saw pictures of skydiving near Mt Everest last year, and heard of the price tag I thought I would never be able to afford it.

But now that skydiving is offered in Pokhara, the price is relatively reasonable, especially if it is a once-in-a-lifetime treat. The next thing to overcome was the fear of jumping off an aircraft and freefalling through the air. But once I watched some of the videos of skydiving in Nepal on YouTube I knew I had to do it.

My friends who had done it before told me it was less scary than bungee-jumping. I called up a friend who had bungeed with me some years ago, and he first balked not because of the jump but because of the cost. However, once he saw the video he messaged back: “Hunchha, I’m in.”

I came across information about the skydiving trip in Pokhara which was organised from 12-15 November on social media and called up Explore Himalaya which also organises skydiving in the Everest region.

So, on 15 November, we met up with the tandem master Ryan Jackson in Pokhara for a detailed briefing about techniques, body posture during freefall and safety issues. I was in capable hands: Jackson has done more than 5,000 jumps and quite a few of those have been in Nepal. 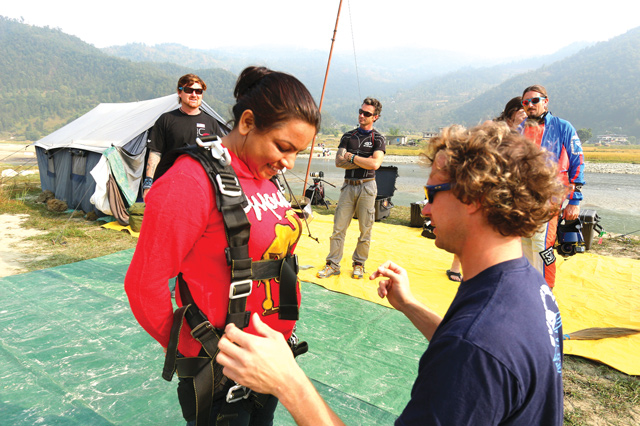 We hopped into a helicopter and I got strapped with Jackson and had to actually sit on his lap while we climbed above Phewa Lake amidst the stunning backdrop of Machhapuchre and the Annapurnas. We got the thumbs up when the helicopter reached 12,000ft and jumped off. 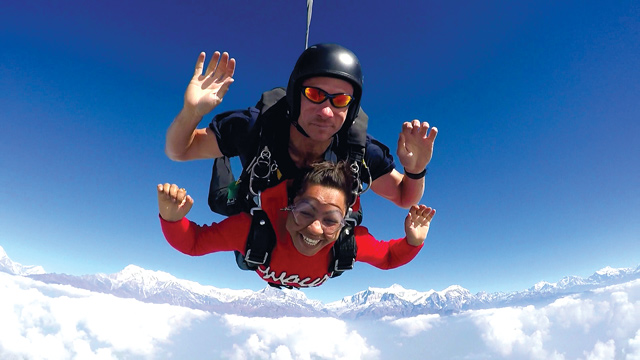 During the 40 second of freefall, I did not get a feeling of falling. In fact, it was more like flying. The air rushing past felt like a thick cushion that kept us afloat. I could hear myself screaming with the excitement, a feeling of exhilaration I have never before experienced in my life. Two photographers who were freefalling alongside, steered themselves with their hands and came close enough to give me a high five and even pose for photographs and video. 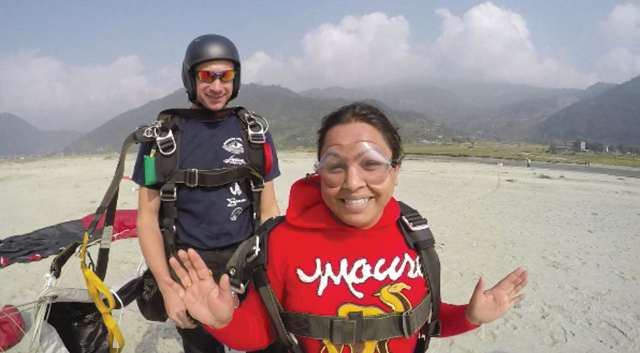 This was a whole new dimension than the other falling sport: bungee jumping. For one thing, it lasts longer, and you have less a feeling of falling through space and more of floating. It is also much more exciting than the more sedate paragliding. The only scary part is when you jump off the aircraft, which just lasts a few seconds. After that, the adrenalin takes over.

After 45 seconds, Jackson pulls the chord, the parachute unfurls above us with sudden deceleration, and we glide. My only regret was the feel of floating did not last longer. Jackson let me steer the parachute so I could take us down to the drop zone in Pame.

Being back on the ground was comforting, but I was already missing the excitement of the fall.

After the success of Everest skydive, Explore Himalaya is now offering annual skydiving trips to Pokhara. Skydivers are flown 12,000ft above Pame Danda, west of Phewa Lake, the dropzone for the jump.

Although not cheap, skydiving in Pokhara is relatively affordable compared to Everest skydiving. Nepalis are charged Rs 75,000, for Indians it is Rs 80,000 and it costs US$800 for foreigners.

8 ADVENTURE SPORTS TO TRY IN POKHARA 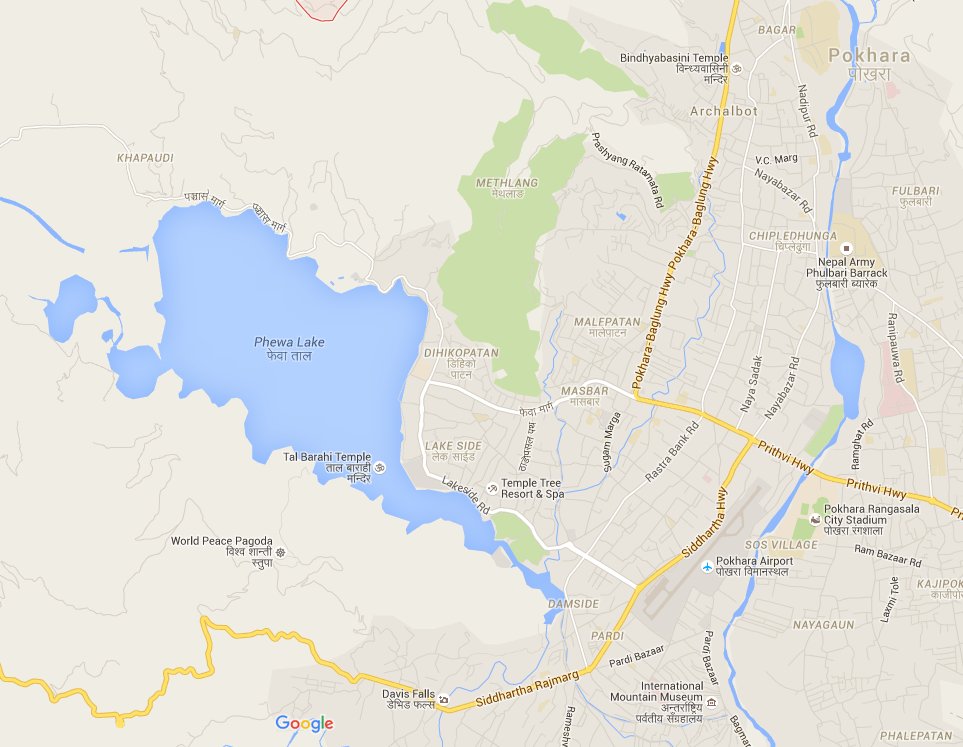 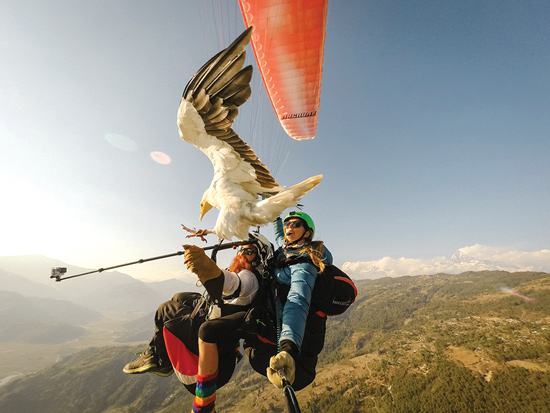 A combination of paragliding and falconry, parahawking was developed by British falconer Scott Mason in 2001 and pioneered in Pokhara. Single tandem flights start at Rs 21,000, with Rs 1,000 from every flight donated to vulture conservation projects within Nepal. 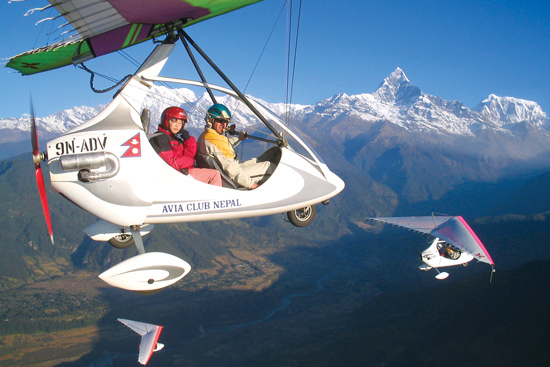 Pokhara offers ultralight flights ranging in duration from 15 to 90 minutes. Prices for a 15-minute flight around Pokhara begins at Rs 12,000. 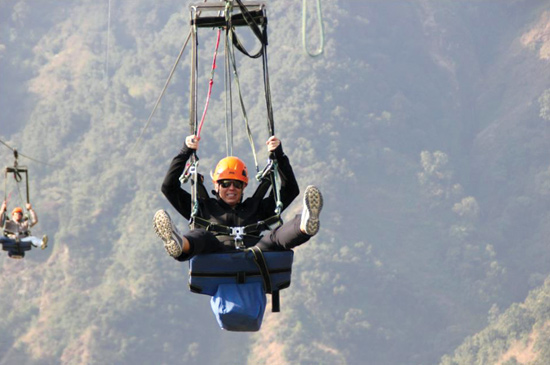 HighGround Adventure’s famed zip line will drop you 2000 vertical feet reaching speeds of up to 120km/h. A descent on this exhilarating cable costs Rs 7,200. 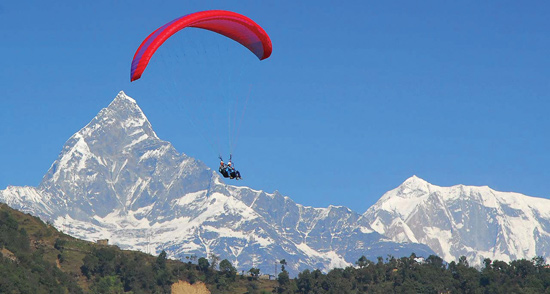 Several companies offer paragliding within Pokhara. Experience scenic views of the city, Phewa Lake and its surrounds from high above. Prices start at Rs 8,500. 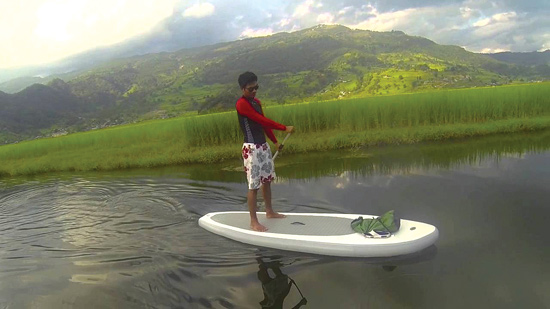 Rent a paddle board and experience Phewa Lake at your own leisure. One hour, half day and full day rentals are available with charges ranging from Rs 800 to Rs 3,000. 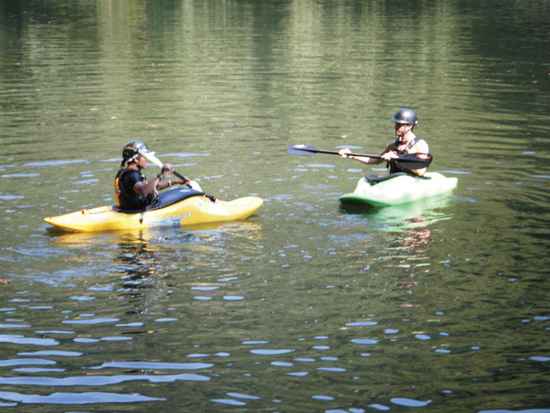 Kayaking is another alternative for touring the glassy waters of Phewa Lake yourself. Boats can be rented for an hour to full day and prices range from Rs 200 to Rs 650.

A half day of rafting on the upper Seti River starts at around Rs 5,000 depending on the season. 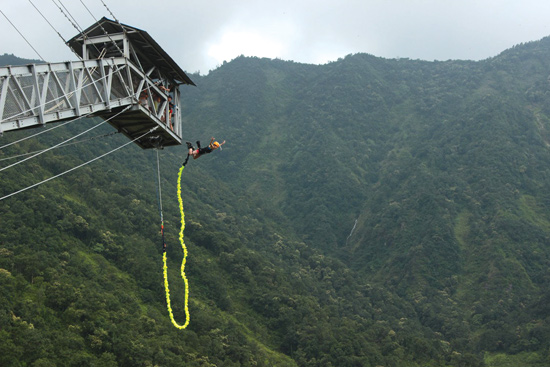 Introduced only last year by Highground Adventures, the company also responsible for bringing zip lining to Pokhara, bungee is fast becoming one of the most popular adventure sports in the lake city. A single jump costs Rs 7,200.

It's a bird, Hariz Baharudin