Kathmandu’s Silicon Alley and the Law 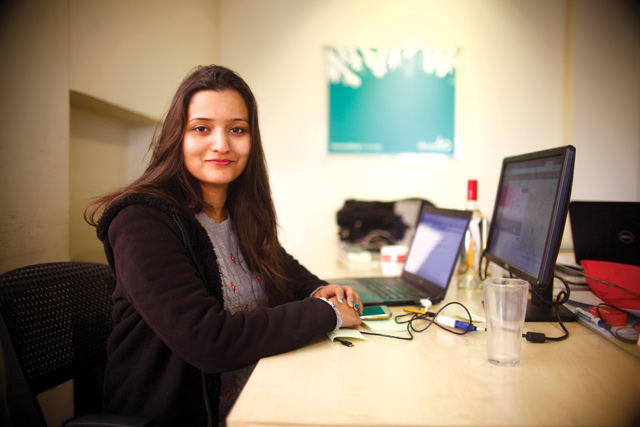 On his daily commute from Chabahil to Jawalakhel, Aayush Subedi used to give rides to friends going in the same direction. He saw others who needed rides, and many like him who could share.

So, the 27-year-old engineering student who came back to Nepal after graduating from an American university, designed a motorcycle ride sharing app. However, even though talented young people like Subedi are ready for Nepal, Nepal may not yet be ready for them.

Subedi is not allowing obsolete rules and the bureaucracy to deter him. He says, “Despite start-ups being risky business, I believe things are changing, more people are turning their ideas into new ventures.”

After returning from the US, Subedi started working on tech products with Three60 Consulting, and designed an app to track Sajha buses with which users could save time by finding out when the next bus would arrive. But the app didn’t take off, and out of sheer boredom the team started working on a motorbike ride-sharing mobile platform called Tootle.

At the glass panelled nerve centre of Three60 in Jawalakhel, Subedi projects a map of Kathmandu with the location of available drivers and demonstrates how Tootle works (see box).

“Initially we were worried about the response and did not have high expectations,” recalls Princi Koirala who looks after the business development and marketing. “But Tootle must be meeting a need because it is becoming popular with consumers and the technology is translating into a brand.” Koirala, 26, is an electronics engineer with an MBA degree from Nepal, and has worked from scratch on tootle with Subedi. She also feels that Nepal’s laws lag behind innovations possible in the IT industry.

“Working in a technology company I have realised that the expertise is there, and because the industry is new there are challenges. But that is what makes it exciting,” says Koirala. “I tell young Nepalis to go overseas, study, learn skills and come back. There are a lot of opportunities here, and the country needs us.”

Subedi, for his part, had a job as a graphics designer and worked in server architecture in the US before deciding to return to Nepal. He is excited about the future of Tootle which completed its first 1,000 rides in just a month after launching on 1 January. Asked why he returned to Nepal, Subedi replies: “In the US you work because you need to, not necessarily because you like what you are doing. My job wasn’t bad, but I wasn’t getting to do what I wanted which was programming. Here in Nepal you get to be someone.”

Nepal’s start-up sector has no dearth of motivated young talent like Subedi and Koirala, who have found fulfilling jobs despite archaic laws and underdeveloped e-commerce. 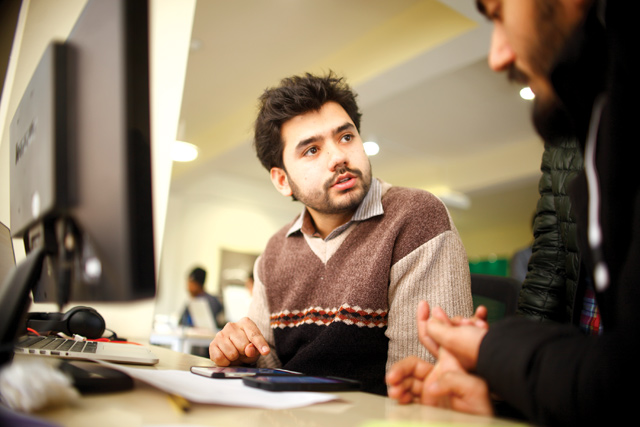 “The younger generation is coming up with new ideas, yet the government is reluctant to encourage them, but if you don’t push you don’t innovate,” explains lawyer Anup Uprety. He says there is nothing in the law to actually restrict a shared economy, but the culture of cartels and monopolies adds to the challenge of doing business in Nepal. Innovative ideas like Tootle will not grow in a traditional legal system.

Tootle’s co-founder Sixit Bhatta has a telecommunication background, and says he had to engineer a means to get around the limitations of payment gateways. Because credit card payment is complicated in Nepal, users pay for rides using an eSewa account.

Although Tootle hasn’t been officially notified, the Department of Transport Management says Tootle is illegal, citing a rule that private vehicles are not allowed to serve as taxis.

Bhatta maintains that Tootle is not a taxi service, but works on the concept of a shared economy made possible by mobile connectivity. He says, “It is a platform for our bikers and normal people to connect. We are trying to develop a culture of sharing rides. People call it a ride-sharing app, but what Tootle is effectively doing is creating jobs.”

The government, instead of encouraging innovation, appears to be putting hurdles on the path of young Nepalis with ideas. Out-dated laws, red tape and limitations on online payments are discouraging, but that does not deter entrepreneurs like Bhatta at Three60.

“Young Nepalis have amazing minds, and are working on cutting edge technologies. They are all doing it for a cause and need to be motivated. The law needs to follow technology, and not the other way around,” says Bhatta.

One morning this week, Koirala and Subedi arrive at their Jawalakhel office after providing rides to passengers on their motorcycles. Koirala immediately starts tracking one of her colleagues hiring a ride to the office, while Subedi closely follows the process to fix minor kinks in the app.

For now, Subedi says he is challenged and excited: “I am quite satisfied with where I am at the moment, but I’d like to go abroad again for my masters. Will I return? We will have to wait and see.” 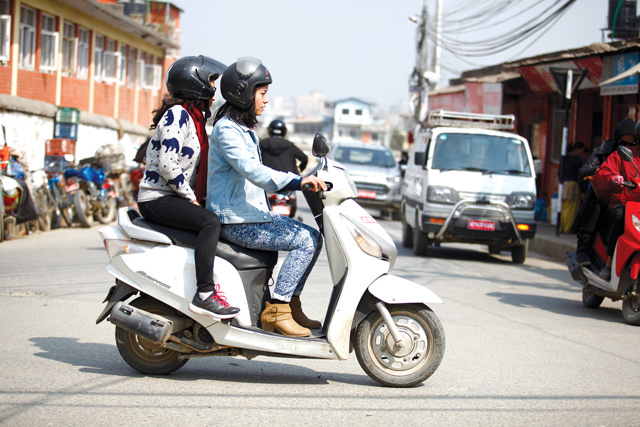 Say you don’t want to bicycle in Kathmandu because of the pollution, and avoid buses because they are crowded. Just download Tootle on your phone and provide your name and email address. A registration code is automatically generated.

If you have a motorcycle and want to make money on the side, download Tootle Partner. It asks you to upload a picture of your driving license and open an eSewa account for online transactions.

And you are both all set. Users book their rides by setting a pick up and drop off location with options of right now, 15 minutes later, 30 minutes later and an hour later. The location of the user and available bikers nearby can be easily tracked with Google maps.

Users can also choose the gender of the driver. A female passenger can either choose a female or male driver, and vice versa. A user can also enable an automatic safety SMS to a predefined number of people to inform them of where they were picked up, the destination and the number of the motorbike.

Once the ride is completed, both the parties have to rate each other on their experience and provide feedback. Poorly rated bikers will have to explain why, and some have been blocked.

Tootle currently offers Rs 200 free top-up for registered users. The service costs Rs 50 (inclusive of tax) for the first 3km and an additional Rs 12 per km. The bikers get 80 per cent of the payment.

Faulty, outdated rules, failures in implementing policy and a lack of clear guidelines are hindering the growth of the tech industry in Nepal. New investment and a surge of youthful talent in recent years have expanded IT start-ups. Yet, innovation is held back due to archaic laws and bureaucratic red tape.

“Without a doubt, our laws are out-dated. But laws follow technology and not the other way around. At the pace technology is moving ahead, laws simply can’t keep up,” explains Hempal Shrestha of the Federation of Computer Associations of Nepal.

For example, the Department of Transport Management has a legal issue with the motorcycle ride-sharing app, Tootle. The government segregated green and black plates for tourist buses and taxis, while red are for private vehicles, mostly motorcycles. The green and black plates pay taxes, whereas there is no such tax for red plates. “Tootle disrupted the market, there is no policy to hire red plate vehicles, so Tootle will create a demand for the law to evolve, just as e-payment systems have been demanding a banking license,” says Shrestha.

The lack of payment getaways is a major hurdle for IT start-ups, and Nepal still doesn’t have a reliable mode of online credit card payment and mobile cash hasn’t really taken off. E-payment systems like eSewa aren’t regulated and don’t yet have a banking license.

“There is no law in Nepal that allows people to pay online securely. But the most important thing for thriving e-commerce is making financial access possible,” says analyst Sujeev Shakya.

The free market economy is also not functioning normally because of a rent-seeking state and cartels protected by political patronage. Location and logistics are also a hindrance because many streets in Nepal do not show on Google maps.

“It is possible to invest outside Nepal if we follow certain channels, we do have good policies in place. The problem lies in implementation and the lack of clear-cut guidelines. We need case-by-case clarity for investing abroad,” said Shrestha.

The IT industry, especially, needs strong financial mechanisms for e-commerce and cross-border payments. This limits the full potential for growth of ventures like Sagoon and Tootle. The good news is that the government is coming up with a new draft regulation National Intellectual Property Policy 2016 and an Umbrella Act for IT which should streamline e-commerce regulation.

The business of entrepreneurship, Triveni Chand and Pankaj Parajuli

At the crossroads in Nawalparasi

Carried away by cars

Bandas and blockades are suspended, the firing has ceased, its time to zoom off into the outback in your shiny new hatchback
PANKAJ RAYAMAJHI

Why they joined the protests

Sanjib Khanal , Nepal Samacharpatra, 10 May
Wow! It namely likewise fine treatise about JavaScript, babyliss pro curler I dissimilar Your post doesn't acquaint any sense. ray ban outlet uk if information are defined surrounded sketches one can effortlessly be versed with these. hollister sale I think a visualized exhibit can be better subsequently simply a effortless text, chanel espadrilles for sale that why it gives you improved quality. getnjloan.com Can you amuse forward me the code for this script alternatively interest distinguish me surrounded detail among relation apt this script? Vivienne Westwood online get a babyliss perfect curl Very soon this network sheet longing be outstanding among all blog viewers, isabel marant sneakers saleI too prefer Flash,