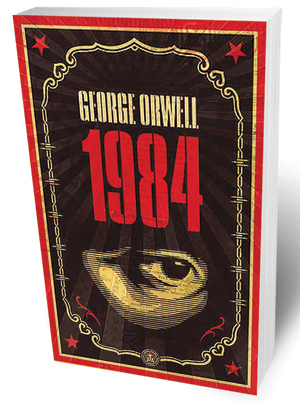 It has been 33 years since Nineteen Eighty-four, for which George Orwell imagined a dystopian world where every citizen is constantly under state surveillance, where two truths co-exist, thought is controlled, history and language manipulated.

Orwell wrote the book in the post-war gloom of 1949 England, when Stalinist totalitarianism was providing strong competition to Nazism for man’s inhumanity to man. At that time, 1984 must have seemed so far in the future that the novel was seen as a kind of science fiction. But here we are in 2017, and there is still North Korea under Kim Jung Un which has outdone Oceania under Big Brother. Or, as has been remarked by many liberal opinion makers, the United States under Donald Trump.

Nineteen Eighty-four takes place in Airstrip One of the totalitarian superstate of Oceania, ruled by an elusive Big Brother (who may or may not exist) with four ministries: Love, Truth, Peace and Plenty, known as Miniluv, Minitrue, Minipax and Miniplenty respectively in Newspeak, the official language created solely to meet the requirements of the political ideology of Ingsoc (English Socialism).

This is all Dear Leader Land, and the similarities to the ‘alternative truth’ hyper-reality of Trumpian America is stark. Orwell’s Animal Farm (1945) may have analogies in post-revolutionary societies like present-day Nepal where the former comrades resemble Napoleon and Snowball, and His Former Majesty could be compared to Farmer Jones. And there may be hints of the world of Duterte, Erdogan, Trump or Putin in Aldous Huxley’s Brave New World, but it is Nineteen Eighty-four that gives readers an uncannily prescient look at how democracy can degenerate into demagoguery.

The Newspeak of White House Spokesperson Sean Spicer, Kellyanne Conway or President Trump himself are shockingly similar to the language used by Orwell’s Minitrue, the propaganda ministry tasked with concocting alternative facts.

One could take the analogy a bit too far, but the way media is threatened and manipulated in Washington press conferences these days is eerily familiar to Miniluv. It enforces loyalty to Big Brother through fear, intimidation and brainwashing. Minipax declares war alternatively with Eurasia (Russia) and Eastasia (China) much in the same way that Trump launches cruise missiles at Syrian air bases, or moves the US Navy Pacific Fleet to the Korean coast. Miniplenty has similarities to Trump’s crony capitalism in fanning paranoia of immigrants.

Orwell’s protagonist, Winston Smith, works for the Ministry of Truth. His job is to rewrite history to change the facts as they suit the party in the present scenario. Sound familiar? Winston is 39 years old and an Outer Party member, the middle class considered potentially subversive by the nomenklatura. Their every action is scrutinised, luxury is limited to cigarettes and victory gin, physical intimacy is only for procreation, emotions are controlled and children are raised to spy on parents. The Thought Police (Thinkpol) arrest and punish comrades with thoughts unapproved by the party.

But Winston is a secret dissident, despises the regime and supports the beliefs of Emmanuel Goldstein, an enemy of the state and defender of freedom. He soon finds a kindred spirit in O’Brien, a high-level inner party member, and starts a relationship then falls in love with Julia, the girl in the Fiction Department of Minitrue. Winston rents a room in the prole (proletariat) area to escape constant surveillance. But the Thinkpol inevitably catch up with him and Julia. They are arrested and discover that O’Brien is an informer at the Ministry of Love.

Orwell was a social democrat who served the British colonial system in Burma, and his dark vision is of a future that has loud resonance today. That must be why Nineteen Eighty-four is a best-seller again in bookshops in Europe and the US. We may have to re-learn the Newspeak vocabulary of Doublethink, Thoughtcrime and Crimestop.

The bright side of Everest

Mount Everest often gets bad press for  commercialisation and the lack of morality of its climbers. However, Nepali Times mountaineering correspondent and climber, Billi Bierling, saw a different side on the way to the summit this spring.

The power of a good example

If you are tired of Kathmandu's seedy airport, wait it out on the upper deck
Wow! It namely likewise fine treatise about JavaScript, babyliss pro curler I dissimilar Your post doesn't acquaint any sense. ray ban outlet uk if information are defined surrounded sketches one can effortlessly be versed with these. hollister sale I think a visualized exhibit can be better subsequently simply a effortless text, chanel espadrilles for sale that why it gives you improved quality. getnjloan.com Can you amuse forward me the code for this script alternatively interest distinguish me surrounded detail among relation apt this script? Vivienne Westwood online get a babyliss perfect curl Very soon this network sheet longing be outstanding among all blog viewers, isabel marant sneakers saleI too prefer Flash,