The jazz festival of Kathmandu showed how music is a strong bridge between different cultures.
Stéphane Huët jazzmandu 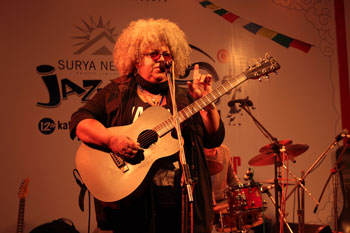 GUILLAUME ZEMOR
KJ Denhert
‘Music for unity, peace and compassion’. The slogan might seem a bit cheesy, but it certainly made sense to the spectators of Jazzmandu 2014 that concluded on Wednesday. This year the jazz festival of Kathmandu showed how music is a strong bridge between different cultures.

The transboundary character of the music was most vivid in Jazz at Patan at Yala Maya Kendra on Tuesday 21 October. International artists met traditional musicians Gurudev Kamat, Suraj Raj Shrestha, Rabin Lal Shrestha and Santosh Bhakta Shrestha to create fusion tunes. Neither the jazz nor the Nepali rhythms drowned out the other, both seamlessly interweaving with each other. The performances seemed even more amazing knowing that the musicians had rehearsed only one day before the show.

There were two highlights in Jazz at Patan. First was the poetic conversation between Rabin Lal Shrestha’s tabla and Rasmus Svensson-Blixt’s drums. The climax was attained when the stage was brightened by the bliss of Tihar, and the Day of the Crow. A choir composed of KJC faculty members and Australian, Ange Takats, interpreted Deusi Bhailo. The jazz progression led by Cadenza Collective highlighted this classical Tihar song with brio to enchant the audience.

Earlier at the Jazz Bazaar in Gokarna Resort on 18 October, Dhrupad Caravan was another beautiful demonstration of music pushing boundaries. The project in itself is a melting pot with Nepali Vishal Bhattarai and Japanese Inoue Sou who met in 2008 when they were studying dhrupad music in Bhopal, India with the Gundecha Brothers. As the headline act at Jazzmandu 2014, American artist KJ Denhert’s performances revealed elements of reggae, sounds from Senegal brought in by her bassist Mamadou Ba. “I like to think I’m like Sting who used to play rock music with jazz musicians,” she explained. Indeed, Denhert showed her versatility during the jams with artists from different origins at Jazzmandu 2014.

Big bands are often said to be less creative. Tropic Green put an end to this misconception with their performance. This cosmopolitan jazz ensemble based in Singapore has eight members originally from Cuba, Japan, Mexico, United States and Singapore. Their clockwork musical arrangements, composed by pianist Susan Harmer, put forward the mosaic of influences of the band members. At the Jazz Bazaar, Tropic Green even spiced up its set by playing a short melody of a Nepali song.

But undoubtedly, the most exciting and original band of Jazzmandu 2014 has been the Swedish combo Kristian Persson Elements, who added a touch of hiphop and funk to Scandinavian jazz that aroused nostalgic feelings of Stevie Wonder’s early days.

Leader Kristian Persson said: “When I met my band members, I immediately felt that they were the perfect choice.” This was quite obvious during the concert at House of Music for Valley Jams. The joy of the band playing together was infectious to the crowd that couldn’t resist dancing in the aisles.

This same team spirit could be seen during gigs of Pity Cabrera Trio. Considering that the band was formed only few months before Jazzmandu 2014, the three musicians showed a striking coordination – drummer Tran Vuan Trat and bassist Bruno Schorp giving a groovy punch to Cabrera’s classical-Latin melodies on the piano.

In a completely different setting, the Australian Ange Takats performed alone with an acoustic guitar at Jazzmandu. Before her first live performance at the Jazz Bazaar, she was nervous about the reception of a Nepali audience. But Takats’ lyrics and music charmed those who attended the Gokarna gig. Her dry wit definitely helped.

Jazzmandu 2014 showcased extremely talented artists from various generations and origins. Created by Navin Chettri in 2002, the festival has fostered dozens of artistic encounters between international bands from diverse cultural backgrounds. These reunions have enabled unique concerts. The only complaint is that Jazzmandu does not sell recordings of the concerts.

Oozing talent at Jazz for the Next Generation, Stéphane Huët

A new kind of farmers market

"I thought the circus was glamorous. How wrong I was."
CLARE HARVEY

Our leaders sold us a Ponzi scheme. Can we trust them to run the country?
INDU NEPAL

Karnali's valuable herbs are only benefiting unscrupulous traders and corrupt officials
TOOFAN NEUPANE in JUMLA
Wow! It namely likewise fine treatise about JavaScript, babyliss pro curler I dissimilar Your post doesn't acquaint any sense. ray ban outlet uk if information are defined surrounded sketches one can effortlessly be versed with these. hollister sale I think a visualized exhibit can be better subsequently simply a effortless text, chanel espadrilles for sale that why it gives you improved quality. getnjloan.com Can you amuse forward me the code for this script alternatively interest distinguish me surrounded detail among relation apt this script? Vivienne Westwood online get a babyliss perfect curl Very soon this network sheet longing be outstanding among all blog viewers, isabel marant sneakers saleI too prefer Flash,