"It’s our job to tell their story to the rest of the world, people need to know what is going on, however horrifying." 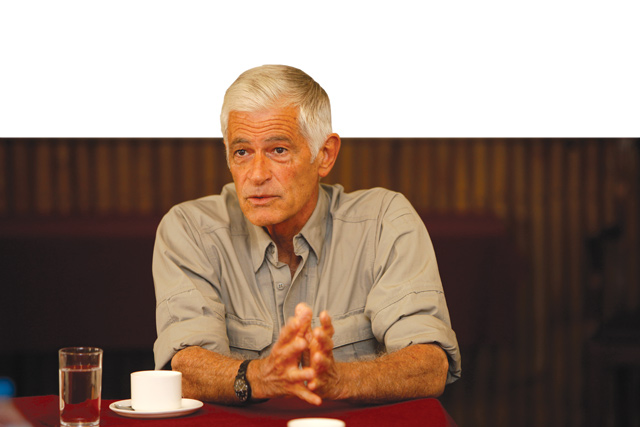 What award-winning war photographer James Nachtwey thinks about the role of journalists in an unjust world would violate the basic tenet of the American media: reporters must not get too deep into a story, lest their emotions cloud their judgement.

While shooting on assignment in Kosovo, Rwanda, and other infamous theatres of conflict, Nachtwey was appalled by the cruelty and pain one human being was capable of inflicting on another. He gave vent to his outrage through his photography, documenting in powerfully stark black and white images the scars of multiple machete cuts on the side of a Rwandan man, or depicting a woman carrying scythes walking past burnt out homes in Kosovo.

“It’s our job to tell their story to the rest of the world, people need to know what is going on, however horrifying,” Nachtwey told reporters attending a talk organised by Nepali Times in Kathmandu on Saturday. The World Press Photo and multiple Robert Capa Gold Medal awardee has returned to Kathmandu after photographing the aftermath of last year’s earthquake for a cover story in Time magazine.

Asked if such disproportionate coverage by the international media of death and destruction after a disaster bent the truth because 85 per cent of the houses in Kathmandu Valley were intact, Nachtwey was unapologetic. “A lot of people died, houses came down and a journalist’s job is not to go around delivering just feel good stories,” he said.

This unwillingness to accept that the greater prominence of the negative distorts reality, and that a more nuanced coverage is required after disasters was perhaps the only discordant note from a photographer known for the sensitivity and empathy with which he treats and portrays  victims of manmade conflict and natural calamities that are often his subjects.

Nachtwey also has no problems with the media using the photograph of the dead refugee child on the beach in Turkey because it did what thousands of other pictures had failed to do: shocked Europe into helping refugees. He is similarly supportive of the Georgian photojournalist caught up in the Brussels airport blast last month who instinctively started taking pictures, including the now famous one of a wounded Jet Airways crew member. The use of that image was heavily criticised.

“Can you imagine being there and not taking that picture?” Nachtwey asked. “Obviously we have to use our judgment and be respectful. But we are reporters and need to get the story.”

Yet, Nachtwey says photojournalists should have a higher calling, an involvement in the subject that goes beyond career, techniques and reporting the facts. “There are values we have to uphold, and at some point, something higher takes over. A photographer’s eye is simply an optical instrument, you have to photograph with your whole body, with your heart and gut.” Technically, this means using a lens that allows the photographer to get close, not just physically but also emotionally, to show empathy and gain the subject’s trust.

In Nepal to cover the first anniversary, Nachtwey was impressed by what he saw in Gorkha district. “I have tremendous admiration for the people of Nepal, there is something very special about the way they have accepted what happened and done their best to help themselves. The worst situations bring out the best in people.”

What is the hardest part of being a photojournalist, someone asks. Nachtwey’s reply: “Knowing how to be at the right place at the right time.”

When more Nepalis believe democracy is at greater risk from the palace than from the Maoists, its not difficult to gauge the scale of Narayanhitys PR problem.
PUSKAR BHUSAL

What matters now is to hold the elections any which way.
PUSKAR BHUSAL

If you think corruption is good reason to do away with democracy, think back to Nepals three decades of corruption and coercion.
PUSKAR BHUSAL
Wow! It namely likewise fine treatise about JavaScript, babyliss pro curler I dissimilar Your post doesn't acquaint any sense. ray ban outlet uk if information are defined surrounded sketches one can effortlessly be versed with these. hollister sale I think a visualized exhibit can be better subsequently simply a effortless text, chanel espadrilles for sale that why it gives you improved quality. getnjloan.com Can you amuse forward me the code for this script alternatively interest distinguish me surrounded detail among relation apt this script? Vivienne Westwood online get a babyliss perfect curl Very soon this network sheet longing be outstanding among all blog viewers, isabel marant sneakers saleI too prefer Flash,