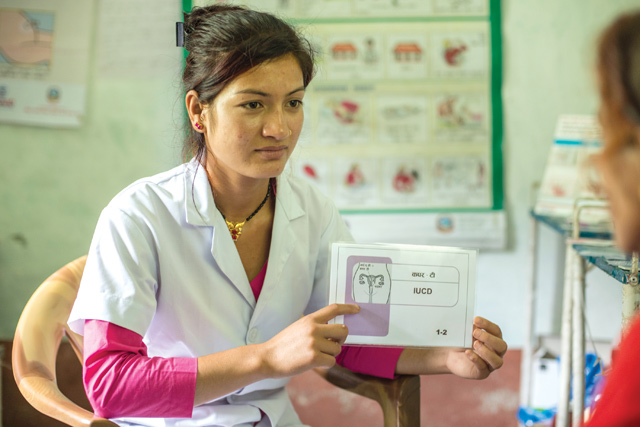 Subit Kazi Tamrakar
GAGGED: A counsellor for Marie Stopes International explaining contraception procedures to a woman at a clinic in Nepal. The group says the impact of Trump's funding cut will be "massive".

Last week, governments and private partners gathered in London for the 2017 Family Planning Summit. The goal: to evaluate progress toward commitments to improve healthcare for more than 120 million women worldwide from 2012-2020.

More than half-way to 2020, only 30 million women have been reached. At a time when activities need to be sped up, the United States, the leading bilateral funder of family planning worldwide, just pulled out billions of dollars from organisations serving the world’s poorest nations, claiming they funded abortion services.

“The United States is a very big country: the rules they implement affect small countries like Nepal,” said Amu Singh Sijapati of the Family Planning Association of Nepal (FPAN). “It’s not good to play politics with human health.”

One month before the 2015 earthquake, the Nepal government committed to increase funding for family planning by 7% annually. Since then, Nepal has struggled to meet its goal. It partnered with international NGOs and private companies to close the gap and reach 1 million more women by 2020. But these partners may lose the majority of their funding.

In March, US President Donald Trump reinstated the Global Gag Rule or Mexico City Policy, which has repeatedly been removed by Democrats and reinstated by Republicans since 1984. Trump not only plans to cut funding to USAID, but to any organisation that offers abortion counselling, treatment or information on the topic.

As much as $8 billion could be slashed, which will affect HIV treatment, cervical cancer testing, long-term birth control and maternal care. Trump renamed the policy Protecting Life in Global Health Assistance.

Featured below are three family planning organizations working in Nepal that are bracing for the impact: 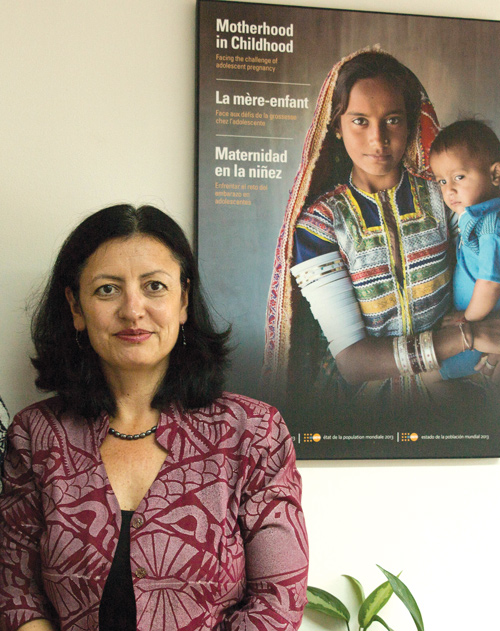 “This is nothing new for us,” sighed UNFPA Representative to Nepal Giulia Vallese (above), who recalls the agency scrambling after cuts under the Bush administration. But being familiar with cuts does not soften the blow. This year, Vallese is working with half her ideal operating budget.

UNFPA does not offer abortions, but counsels women who have undergone unsafe abortions and advises abortion providers on safe procedures. “Where abortion is legal, it should be safe,” said Vallese, noting that unsafe abortion is one of the top three causes of maternal mortality.

The cut to UNFPA is separate from those resulting from the Global Gag Rule. It stems from the 1985 Kemp-Kasten Amendment, which claimed that UNFPA assisted China’s forced abortions and sterilizations in the 1980s.There is no proof for this claim. Without US funds, most donations to UNFPA will be ear-marked for specific projects. Less 'sexy' programs like humanitarian preparedness will suffer.

“You can’t show results until an emergency hits,” Vallese said. So contraceptive kits for the next earthquake will go unfunded. Additionally, treatments for pelvic organ prolapse (POP), obstetric fistula, cervical cancer and human papillomavirus are likely to lose. UNFPA offers free surgeries for women with fistulas, but needs funds to reach women who will die from or live with these painful conditions for years. 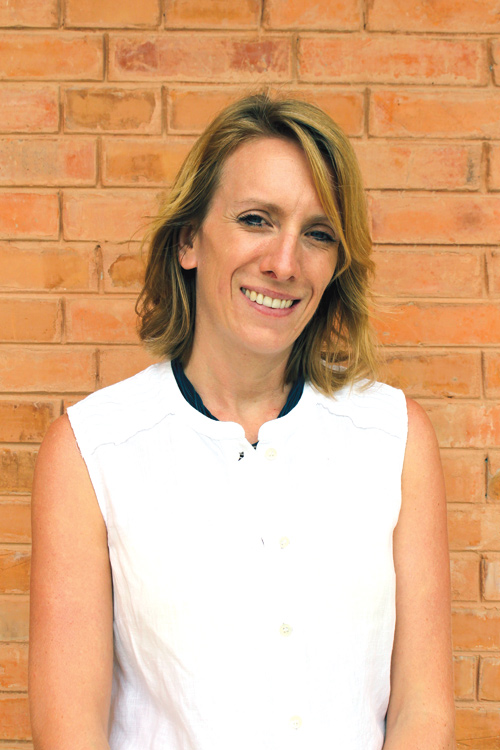 The ‘Marie Stopes Ladies’ walk four or five days into the mountains to provide contraception, health care and counselling to Nepal's underserved. But in a few years, they may have to discontinue their work.

MSI will take a big financial hit from the Gag Rule, and repercussions will be felt worldwide, said country director Sophie Hodder (left). “MSI will lose, family planning will lose, full stop. The effects will be absolutely massive,” she said.

MSI is the leading provider of safe abortion services in Nepal. It has 36 clinics around the country, none of which are funded by USAID, so US government cuts will not affect abortion services.

Instead, the cuts will obstruct distribution of contraceptives, counselling or perhaps the helpline that receives 76,000 calls a year. Child marriage, low awreness about contraceptives and their limited availability hinder reproductive health. 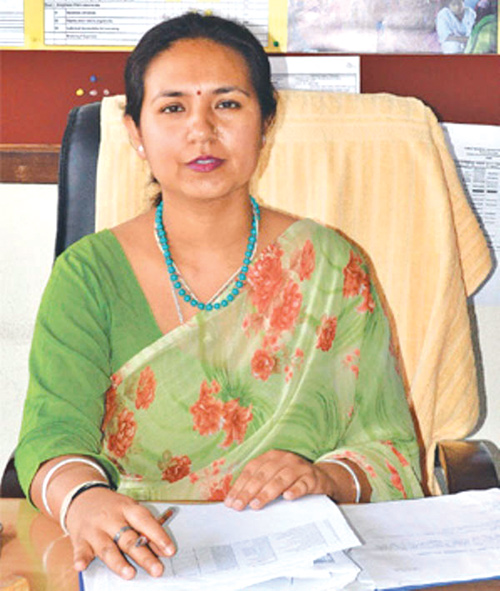 In 2015, the US provided FPAN $5.5 million to train doctors and nurse practitioners and to boost its mobile camp, which provides 11 forms of family planning services to rural areas, including implants of intrauterine contraceptive devices. The camp, which could previously only run four to five months a year now operates year-round. This fund will run out in 2019, and rural women who need long-term care most will be out of options.

“A person who does not have money to eat will not make a seven-hour journey to receive family planning services,” explained Amu Singh Sijapati (above).

FPAN did not receive US funding after the Bush administration reinstated the Gag Rule, and now it is going to disappear again. It costs the organisation Rs100,000 just to train a new staff member in implant training, counselling and health services. Siajapati could scrap abortion-related services, sign the Gag Rule and save herself the trouble, but she said: “We were the first Nepali organisation to push for legal abortion, we can’t sign this.” 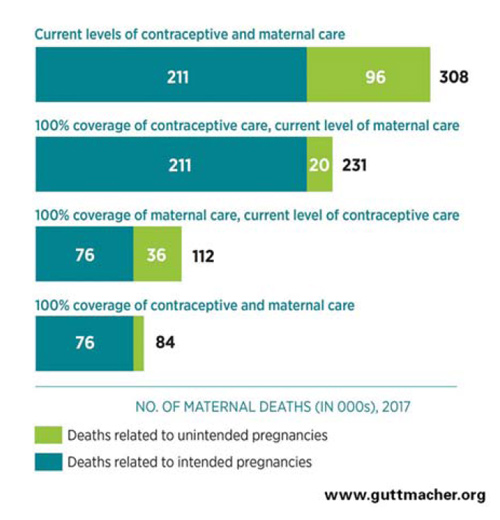 The Guttmacher Institute estimates that 58% of abortions in Nepal were performed illegally in 2014, and that eight out of every 1,000 women of child-bearing age was treated for a medical complication due to an unsafe abortion that year. The same study showed that legalising abortion in Nepal helped to decrease maternal mortality from 580 deaths per 100,000 live births to 190 per 100,000 between 1995 and 2013.

But the current US administration does not call this a success. And though last week’s summit resulted in $2.5 billion in pledges to global care, US cuts will cripple the 2020 goal. While Nepal works to address the health needs of half its population, fundraising may become its biggest challenge yet.

The Chaudhary Foundation is supporting the project and other information dissemination efforts. They were the only representatives from Nepal at the London Family Planning Summit.

The public-private partners will roll out the phone app Khulduli (“Curiosity”) to educate young people about reproductive health later this year. The app was designed for smartphones, and Chaudhary is developing a pre-loaded version for feature phones. They will test the first 100,000 this September, said Merina Ranjit, the assistant general manager.

“The young working-age population is high," says UNFPA representative Giulia Vallese. "Now is the time to invest in this generation.”

The pain and shame of 1 million Nepali women, Rojita Adhikari