Getting rid of elephant foot 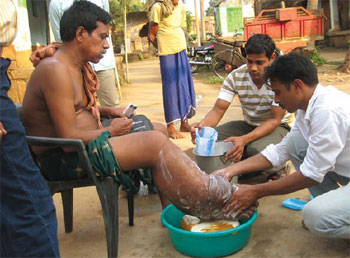 WWW.AIF.ORG
In an effort to control lymphatic filariasis, the government launched a massive drug administration campaign last week in 10 districts including Kathmandu, Lalitpur, Dhankuta, Terathum, Accham, Bajang, Bajura, and Darchula. According to the World Health Organisation (WHO), 61 of Nepal’s 75 districts are affected by lymphatic filariasis (locally known as hatipaile) and about 10.6 million people in the country are at risk.

Lymphatic filariasis is a mosquito-borne illness like malaria, Japanese encephalitis, and dengue fever. The mosquito in all these cases serves as a vector for these varied diseases, which are actually caused by parasite (malaria and filariasis) and different groups of viruses (Japanese encephalitis and dengue fever). In addition, the mosquitoes are of different species. To study these diseases it is crucial to examine the various mosquito vectors and its feeding habits in the human population.

The parasite (wuchereria bancrofti), which the mosquito injects into humans, is elusive and Dracula-like, appearing only at night in the host’s blood stream. Clinically the presentation of lymphatic filariasis can range from being asymptomatic to frequent coughing episodes to the full-blown elephantiasis.

In Nepal, the disease may also present as a hydrocele (water-filled scrotum) and keep surgeons busy. Fixing a scrotum with hydrocele is one of the common, easier operations that senior doctors will delegate to the interns. Although lymphatic filariasis is usually not life-threatening, it is clearly a nuisance.

All the customary precautions against mosquito bites also apply to this disease: using nets and insect repellents and cleaning stagnated, dirty water sources where the insects could breed. However, the good news is that there is a very effective medicine called diethylcarbamazine (DEC) for the prevention and control of elephantiasis. Millions of people have taken DEC with no serious side effects. Some patients may experience mild fever, chills, nausea, or headache, but these are short-lived.

In Nepal and other countries of endimicity, governments are using community-based interventions to treat entire at-risk populations. The rationale behind this approach is that mass distribution of the drug given once every year for about five years will profoundly suppress the bug in human hosts. If the suppression is sustained then transmission (spread of the disease) by the mosquito is interrupted.

These campaigns are coordinated by the WHO and ably supported by two pharmaceutical companies, Glaxo SmithKline and Merck and Co, who in 2000 made a pledge to donate the drug for free. It is reported that over 700 million people in over 50 countries have participated and the disease has been eliminated in certain defined areas.

If your child is over two years old, if you are not pregnant, and have no chronic illnesses and other contraindications, it is a good idea to consider taking DEC. In a smart move, the government is administering albendazole, which cures worm infestations in the intestine (a widespread problem in Nepal), alongside DEC. This is very useful because intestinal worm infestation, particularly hookworm, is the main cause of anaemia (lack of the oxygen-carrying haemoglobin in our blood) in our part of the world. So two diseases are being efficiently dealt with by one control program.

Playing the Hindu card may have limited value for Nepal.
CK LAL

America is advised to expand and rule with sweetness and light.
DANIEL LAK

Despite truce, child victims of the insurgency bear the brunt.
SANJAYA DHAKAL
Wow! It namely likewise fine treatise about JavaScript, babyliss pro curler I dissimilar Your post doesn't acquaint any sense. ray ban outlet uk if information are defined surrounded sketches one can effortlessly be versed with these. hollister sale I think a visualized exhibit can be better subsequently simply a effortless text, chanel espadrilles for sale that why it gives you improved quality. getnjloan.com Can you amuse forward me the code for this script alternatively interest distinguish me surrounded detail among relation apt this script? Vivienne Westwood online get a babyliss perfect curl Very soon this network sheet longing be outstanding among all blog viewers, isabel marant sneakers saleI too prefer Flash,