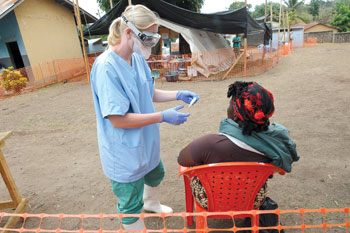 Do we need to worry about Ebola in Nepal? To recap: the first patient with the disease lived near the Ebola River in the Democratic Republic of Congo in 1976 and hence the name.

It was originally called Ebola Hemorrhagic Disease, but now it is known as Ebola Virus Disease (EVD) because not all patients had a bleeding problem (hemorrhage). A complication of dengue in the Nepal Tarai also got a recent name change from dengue hemorrhagic fever to simply severe dengue for probably similar reasons. This name change is useful as it is more accurate and will not mislead clinicians and treating physicians.

Because Ebola is not transmitted through airborne infection,  the danger of transmission is much smaller than flu or a cold. But, unlike them, EVD is deadly. It is chiefly transmitted through direct mucous membrane or broken skin. So, blood, body fluids (for example, sexual contact), indirect contact with environments contaminated with such fluids can lead to transmission. In Africa, burial ceremonies of Ebola victims, where mourners come in direct contact with the corpse, led to infections.

The symptoms and signs of this disease are non-specific and could be mistaken for many common Nepali ailments. Patients present with fever, malaise, sore throat which may gradually progress to the liver and the kidneys and also may lead to internal and external bleeding. In Nepal there are many common diseases such as typhoid, murine typhus, hepatitis, and leptospirosis to name just a few that could mimic EVD. The crucial difference is a history of travel to areas of Africa where Ebola is endemic.

Anyone who comes to see a doctor in Nepal with fever and other non-specific complaints  needs to have one important question asked: has he or she been to Guinea, Liberia, Sierra Leone, Nigeria or surrounding regions. Perhaps it may be easier to first ask for a simple travel history to Africa in the recent past, and then if necessary, ask for details about specific countries in the region the patient might have been to. Most importantly, the suspected patient must be immediately brought to the attention of the health authorities.

The incubation period (the time from which the organism enters the human host to when the symptoms are first noticed) is said to be from 2 days to 3 weeks. So it may not matter if the person was in Sierra Leone five or six weeks ago and now comes with flu-like illness, because this will be past the incubation period.

At present there is no vaccine or proven drug therapy to treat the illness. However an interesting ethical problem has risen, about treatment with the ‘experimental’ drug ZMapp. Apparently two American aid workers (working in Liberia, now in Emory University Hospital in Atlanta, USA) received this drug and are thought to be improving.

Some activists have asked why two white American aid workers received the drug while hundreds of Africans are dying from EVD. But what if this experimental drug, which has not even gone through typical animal testing for side effects, had been used on Africans? The headlines would have screamed that Africans were being used as guinea pigs.

In Nepal there is probably no need to consider an EVD diagnosis unless a patient with flu-like symptoms has a travel history to Ebola-affected areas in the past month.  Our immigration authorities have to watch out for such passengers.

After five decades, Nepal is finally asking what it is we want from aid
BINOD BHATTARAI
Wow! It namely likewise fine treatise about JavaScript, babyliss pro curler I dissimilar Your post doesn't acquaint any sense. ray ban outlet uk if information are defined surrounded sketches one can effortlessly be versed with these. hollister sale I think a visualized exhibit can be better subsequently simply a effortless text, chanel espadrilles for sale that why it gives you improved quality. getnjloan.com Can you amuse forward me the code for this script alternatively interest distinguish me surrounded detail among relation apt this script? Vivienne Westwood online get a babyliss perfect curl Very soon this network sheet longing be outstanding among all blog viewers, isabel marant sneakers saleI too prefer Flash,