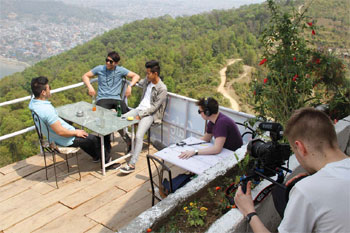 PICS: STÉPHANE HUËT
Nepalis are often asked by foreigners if they have climbed Mt Everest. In Britain, people keep asking them if they are Gurkhas, particularly in towns like Nuneaton where there are large Nepali populations due to Gurkha bases nearby.

Having grown up with Nepalis, English filmmaker Joel Davidson wanted to challenge these stereotypes through a film. “I gained an insight into a fascinating community, and I thought the best way to respect their culture was to capture it with my camera,” he says.

A year ago, Davidson started shooting short film portraits of Nepalis in Nuneaton, 165km from London. He noticed that his subjects had much more to say and that is when he hit on the idea of making a mini-documentary (a shorter form of a documentary, varying between 2 and 25 minutes), called NEPS on them.

The Media production graduate from Coventry University chose to focus on his friends, the second and third generations of Nepalis who had left Nepal when they were teenagers. “I wanted to observe these youngsters who have British citizenship and at the same time have strong cultural roots in Nepal,” he says.

Davidson says young Nepalis of Nuneaton are a positive representation of the youth in general. “They organise events that benefit not only their community, but the entire town,” he says. “If Nepalis were not there, Nuneaton would have been a boring town.”

Davidson started working on NEPS from the standpoint of visual anthropology inspired by the French filmmaker, Jean Rouch. It is a cinema vérité technique that lets the camera roll without the characters being guided.

Last month, Davidson was in Pokhara (pic) to shoot his documentary accompanied by Bijay Gurung, a young Nepali from Nuneaton who came back to Nepal to convert to Christianity. He will join the British Army when he returns to Nuneaton.

The young filmmaker knew it would be challenging to shoot in Nepal as he knew nothing about the country before arriving, and sure enough there were surprises and delays.

“All this waiting around made me understand Nepalis so much better,” says Davidson. Even if he never tried to push things in Pokhara, he admits some of what was natural for the characters did not seem natural to him, as a filmmaker. 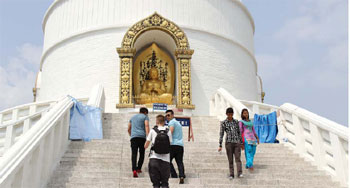 “NEPS might not be the most realistic film, but it’s the most honest,” Davidson told Nepali Times after a shooting at Pokhara’s Peace Pagoda.

In Nepal, language was also a barrier. While shooting in England, the characters were speaking in English and as soon as they arrived in Nepal, they instinctively switched to Nepali.

When he started shooting NEPS in England, Davidson received plenty of support from the Nepali community there. “They are really proud to see that someone is interested in their culture,” says the filmmaker. “And they are excited to watch the film.”

Davidson recently received significant financial help from Joanna Lumley, the English actress known for her campaign to provide all Gurkha veterans the right to settle in Britain. Her father served in the British Army with Gurkhas.

NEPS will be released in June, and Davidson plans to show it in ethnographic film festivals in Europe. He will also travel with NEPS in England to screen it in towns with large populations of Nepalis.

The triumph of documentary, Kunda Dixit

How to make a documentary, David N Gellner

Ahmed Ziauddin of the Asian Network for the International Criminal Court.

Why isn't the government promoting electric cars by giving them tax breaks?
KUNDA DIXIT
Wow! It namely likewise fine treatise about JavaScript, babyliss pro curler I dissimilar Your post doesn't acquaint any sense. ray ban outlet uk if information are defined surrounded sketches one can effortlessly be versed with these. hollister sale I think a visualized exhibit can be better subsequently simply a effortless text, chanel espadrilles for sale that why it gives you improved quality. getnjloan.com Can you amuse forward me the code for this script alternatively interest distinguish me surrounded detail among relation apt this script? Vivienne Westwood online get a babyliss perfect curl Very soon this network sheet longing be outstanding among all blog viewers, isabel marant sneakers saleI too prefer Flash,