In a disaster-prone state

Why is it that even when we know Nepal as a country vulnerable to disasters, we consistently fail to mitigate their effects? This is the question Ajaya Dixit sets out to answer in his book

But you would be mistaken to think that the government learnt its lessons and put in substantial measures to save lives and property before, during and after the floods. This August’s floods submerged almost all of the eastern Tarai — affecting 20% of the country’s population.

Why is it that even when we know Nepal as a country vulnerable to disasters, we consistently fail to mitigate their effects? This is the question Ajaya Dixit sets out to answer in his book, Nepal Ma Bipad (Disasters in Nepal)

Dixit discusses seven types of disasters common to Nepal, with recent examples: avalanches, landslides, floods, blizzards, hailstorms, infectious diseases and even aircraft accidents. Fourteen porters were buried alive on the Khumbu Icefall in 2014. The same year, a chunk of a mountain in Jure fell into the Bhote Kosi, blocking the river, uprooting villages along its path, killing 145 people and closing the Arniko Highway for weeks. 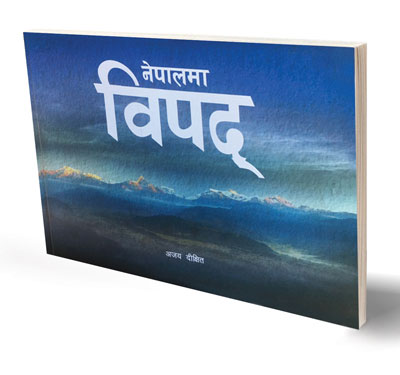 Nepal gets 80% of its rains in the monsoon, but both the frequency and the intensity of cloudbursts are increasing, and the heavy downpours lead to landslides and floods. Freak blizzards have become the new normal in the mountains, as fiercer cyclones from the Bay of Bengal batter the Himalaya. They cause planes to lose their way, kill disoriented trekkers and guides, and destroy tourist trails, as they did in 2014 in the Annapurnas.

Jajarkot’s epidemics of cholera in 2009 and swine flu in 2015 exposed the pathetic state of health services, made worse by the central government’s slow response. And when an Airbus 330 veered off the runway at Kathmandu airport in 2015, it cut Nepal off from the outside world for four days.

Dixit explains that disaster-related response is mostly confined to short-term rescue and relief, while long-term preparedness, prevention, recovery and reconstruction gets short shrift. Sporadic and uneven data collection makes it difficult to identify and help the victims. A lack of clarity about who-makes-what-decisions during emergencies, and with what discretionary power, delays government response. Amidst these systemic shortcomings, Dixit finds the increasing use of information technology, for example in some flood-warning systems, as a positive development.

The book distills 14 specific lessons, each of which challenges us to think beyond rescue and relief, which usually mark the beginning and the end of most post-disaster activities. It cites the need for better data and information dissemination at all levels. It argues that the mass media needs to play a more active role in risk reduction, and that more needs to be invested in training health workers, insurance and micro-credit to help reduce health-, income- and livelihood-related vulnerabilities.

Dixit points out that our approach to development — digging roads in villages — increases the likelihood of landslides. The habit of constructing houses, health posts and schools without the enforcement of building codes increases vulnerability. He calls for participatory local governance that is sensitive, proactive and responsive, not only to the nature of disasters but also to likely contributors such as climate change, lack of accountability and societal exclusion.

My quibble with the book is that it leaves out two disasters common in Nepal: frequent highway crashes, and the internal displacement of the poor due to conflict, natural calamity, financial ruin and lack of access to water and land. Nepal Ma Bipad reads like a cross between a set of finely argued short editorials and a reference book: exposing the limit of Nepal’s build-and-grow linear development and pointing to models that put people’s welfare at the centre. The country’s newly-elected local officials will do their constituencies a big favor if they read this book and make disaster risk reduction a key part of all their governance and development activities.

A new year is as good a time to ponder the benefits of time zones.
DANIEL LAK

Biswamitra Khanal in Gorkhapatra, 30 May
Wow! It namely likewise fine treatise about JavaScript, babyliss pro curler I dissimilar Your post doesn't acquaint any sense. ray ban outlet uk if information are defined surrounded sketches one can effortlessly be versed with these. hollister sale I think a visualized exhibit can be better subsequently simply a effortless text, chanel espadrilles for sale that why it gives you improved quality. getnjloan.com Can you amuse forward me the code for this script alternatively interest distinguish me surrounded detail among relation apt this script? Vivienne Westwood online get a babyliss perfect curl Very soon this network sheet longing be outstanding among all blog viewers, isabel marant sneakers saleI too prefer Flash,