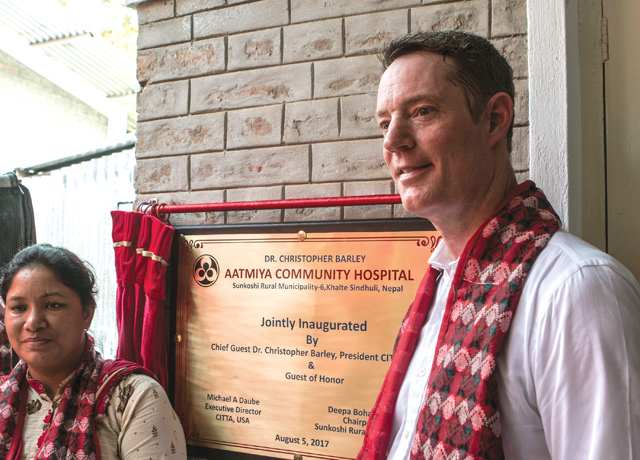 Pics: Sean Shoemaker
MAKING A DIFFERENCE: New York physician Christopher Barley at the inauguration of a new hospital in Sindhuli that bears his name.

Two years after rallying to provide medical care to those wounded in the 2015 earthquakes, a New York doctor and an American medical charity have established a permanent presence in Nepal, inaugurating the Christopher Barley Hospital in Sindhuli last week.

Four hours along the BP Highway from Kathmandu, the facility, also known as the Aatmiya Community Hospital, has 20 beds and will serve up to 100,000 people in the village of Khalte in this underserved district of the Inner Tarai in east-central Nepal.

“We will be able to provide everything short of major trauma or open heart surgery,” said Christopher Barley at the opening. He was joined by Michael Daube, founder of the US-based, non-profit CITTA, which is dedicated to providing healthcare and educational opportunities to excluded communities in under-privileged and remote regions of India and Nepal. 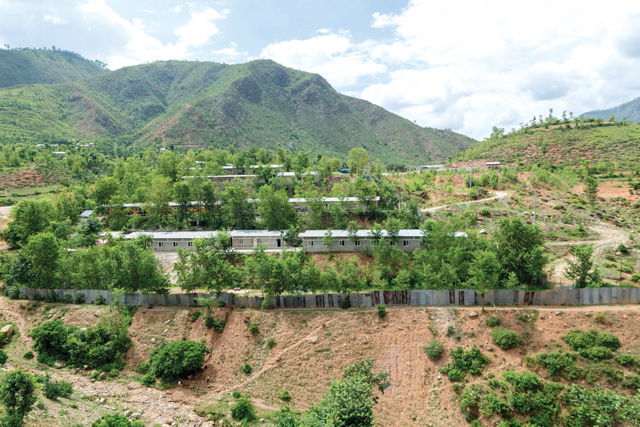 Michael Daube
The facility has been converted from a former housing complex for Japanese engineers working on the BP Highway.

Both men rushed to Nepal after the April 2015 earthquake and were involved in search and rescue for a few weeks but realised there was a much more urgent need for long-term health care in districts not affected by the earthquake. The two selected a former housing complex in Khalte used by Japanese engineers while building the highway from Dhulikhel to Bardibas.

“The location was chosen on purpose: we wanted to have access to roads and to take medical care to a community that wasn’t being served,” explained Barley, adding that they were convinced they made the right choice after 300 people attended a free health camp one week prior to the hospital’s opening. Many had serious health issues that needed surgery and treatment.

“It was an indication that this kind of facility is needed here,” said Daube. “Our aim is to maintain treatment of the poor. We aren’t just extending health care, we are also providing it for a rural community that is deprived of it.” 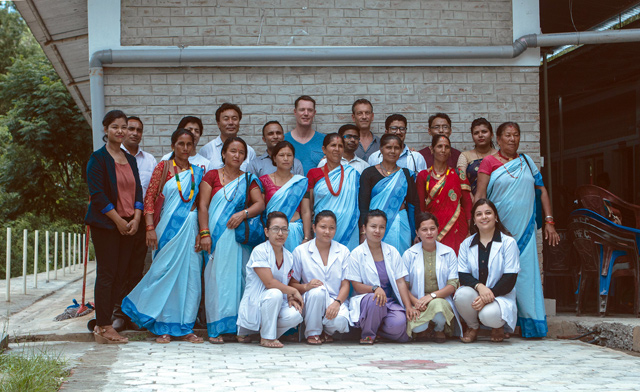 Barley and Michael Daube of CITTA with hospital staff.

Although Daube and Barley have teamed up before, this project is significant to both of them. Barley has a respected internal medicine practice in New York City, and has been involved with Daube in raising funds to extend much-needed medical care and education to Humla and Sindhuli in Nepal and Rajasthan and Odisha in India. Their motto is: 'Making a difference against indifference'.

CITTA’s earlier project to build and run a modern hospital in Simkot of remote Humla district in northwestern Nepal had to be abandoned after a local partner turned out to be untrustworthy.

“This is the first time we have had a project that’s so easily accessible," said Daube. “It can be a safety net for all the villages in Sindhuli.”

In History in the making, Rupa Joshi

Art in a bottle

Can an executive king also be a constitutional monarch?
CK LAL

There is Kathmandu, and then there is the rest of Nepal.
DANIEL LAK

Can we use this time to chase good ideas with good money?
ARTHA BEED
Wow! It namely likewise fine treatise about JavaScript, babyliss pro curler I dissimilar Your post doesn't acquaint any sense. ray ban outlet uk if information are defined surrounded sketches one can effortlessly be versed with these. hollister sale I think a visualized exhibit can be better subsequently simply a effortless text, chanel espadrilles for sale that why it gives you improved quality. getnjloan.com Can you amuse forward me the code for this script alternatively interest distinguish me surrounded detail among relation apt this script? Vivienne Westwood online get a babyliss perfect curl Very soon this network sheet longing be outstanding among all blog viewers, isabel marant sneakers saleI too prefer Flash,