Donate a rupee a day and educate a child
Devaki Bista 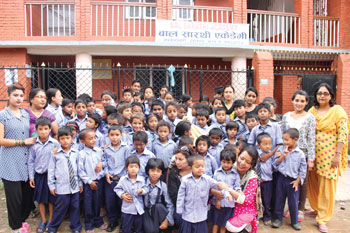 Teacher Mala Kharel was on her morning walk around Pasupatinath ten years ago when she came across a crowd -- a young girl who lived on the street had been raped by a priest. According to bystanders, she was lured with the promise of a five rupee note.

The story affected Mala deeply and motivated her to do something for the street children of Kathmandu. She started out with four girls, all victims of abuse, and began educating them, but soon realised the problem was much bigger than she had imagined.

“I couldn’t sleep knowing there were many other vulnerable children on the streets,” she says.

So, in 2005, Mala (pictured, sitting front row, above) opened Bal Sarathi Academy, which provides free education to street children who also get one meal a day, textbooks, stationery and uniforms, all free of cost. Initially, Mala paid for everything herself, but later got help from an American sponsor for 75 students. The school also gets support from Action Aid to rent its building and has eight volunteer teachers.

When the money ran out, Mala thought she may have to shut down the school. But a chance meeting with RJ Rita Limbu with Image FM at a program changed that. Limbu came up with the idea of the Rs 1 campaign which asks donors to pledge to give one rupee a day to the school.

Limbu began the campaign from her own home, collecting Rs 1 a day from family members. The number of contributors has now grown to 85 and the school raises up to Rs 13,000 a month from this initiative. 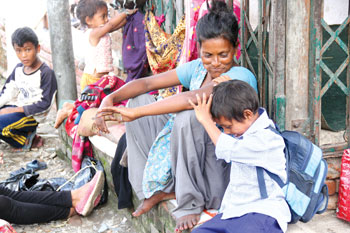 Before joining Bal Sarathi Academy, six-year-old Sanjay Giri would spend his entire day begging around at Pasupati, where his parents also begged for a living. Today, Sanjay spends his day at the school and says he loves it.

Four-year-old Manoj Shrestha, who lost one of his feet to cancer, started at the school two years ago and would have nowhere else to go if the school wasn’t there.

The students love being in class so much that they even come on weekends and public holidays. “One of the reasons why they attend school regularly is because of the free meal, which they wouldn’t be getting if they were out on the streets,” says Mala.

After they pass their Grade Five exams, the students are sent to Sharada Higher Secondary School in Tilganga and Baba Vatika Secondary School, both of which have agreed to educate the children free of cost.   www.balsarathi.org.np