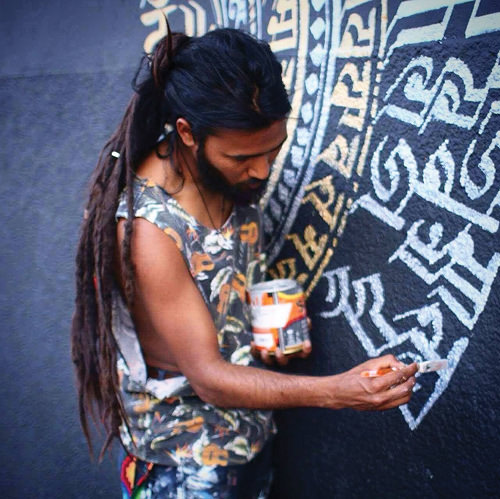 Tucked away on a wall on the streets of Beco do Batman, the meeting point of three alleyways in Sao Paulo known for its gallery of murals by artists from around the world, visitors are greeted by gold and silver writings in an 11th century script from halfway around the world.

The calli-graffiti, in Ranjana lipi, painted against a black backdrop, easily stands out amidst the dense concentration of wall art that lines the street. It is the latest work of Sramdip Purkoti, a Nepali artist who has set out backpacking around the world creating street art.

“It is the pursuit of happiness that makes me do what I do,” explains Purkoti, “and I am happiest when I am travelling and creating art.” Currently in Brazil, Purkoti has travelled and painted in Thailand, Cambodia, Vietnam, Laos and Chile after embarking on his global backpacking trip from Malaysia in 2014. 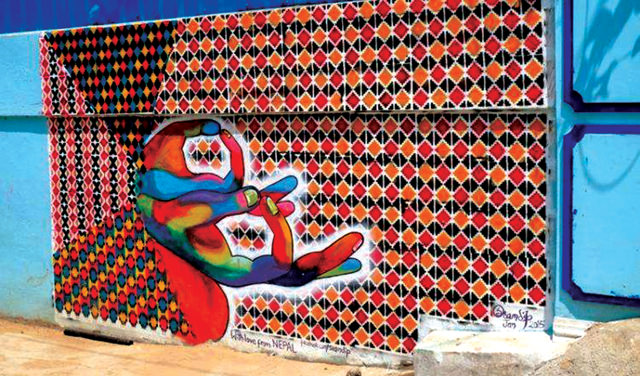 A self-taught artist, Purkoti painted his first mural in Patan during the Kolor Kathmandu project in 2013, which brought together national and international artists to paint 75 murals representing 75 districts around Kathmandu. He painted a large cat with Dhaka pattern paying homage to Tehrathum, the second largest producer of Dhaka textile in Nepal. Dhaka pattern has since been Purkoti’s signature style, the recurring pattern showing up in a majority of his work.

His portrait of Chilean composer Violetta Parra in Santiago is set against a backdrop of red, yellow and blue Dhaka patterns. The healing hands mural he created in Cambodia too is weaved into beautiful Dhaka patterns. The psychedelic cove in Vietnam also resonates the same style.

“My inspiration comes in different medium or in different contexts: people, places, nature, history, or it could be the energy of the moment. Whatever touched me in that present moment is reflected in my work. But having said that, I am very much drawn to patterns. I see that in nature and fabrics of different ethnic groups, and that is why you will see plenty of repetitive patterns in most of my work,” says Purkoti.

Patterns and geometric shapes are also recurring themes in many of the tattoos he has worked on. Purkoti picked up tattooing in Vietnam, after fellow backpackers wanted his designs as tattoos. A local tattoo artist gave him a four-hour crash course and the rest he learnt from YouTube. Working as a tattoo artist has given him the means to travel and paint murals. 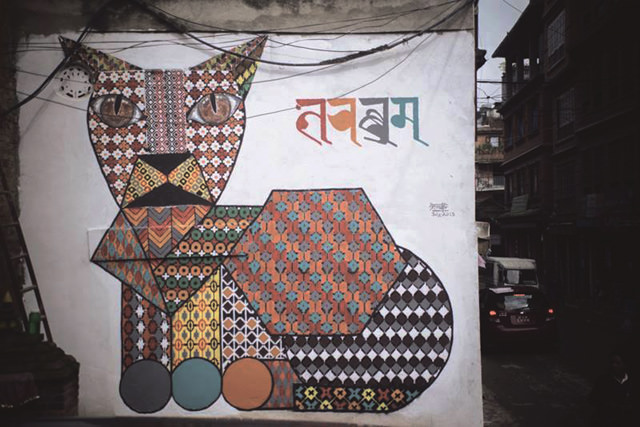 “There have been people who have donated paint and commissioned artwork,” says Purkoti, who has had his share of woes travelling with a Nepali passport. When he tried to cross into Singapore from Malaysia he was stopped at the border, while his visa process to Argentina took ages.

“The experience in Malaysia taught me a huge lesson. Now I don’t try to go to a country without a visa first, even if it says they have visa-on-arrival for Nepalis,” says the artist, who has tried to restore his country’s image by signing all his artwork: ‘With love from Nepal’.

When he started, Purkoti’s work was based on stencil and spray, but he has since experimented with doodles and these days he works on calli-graffiti. Although the medium changes, he says his art hasn’t: “My art is me, representing my experience, observations, social encounters, my take on the unknown.”

Future plans? “To travel to more countries and paint even bigger better murals.”

Our leaders are so obsessed politicking, they are oblivious to the looming job bomb

If your house is on fire and you don't make any move to put it out, your neighbours will be worried
ANURAG ACHARYA

As Nepal's population pyramid experiences a youth bulge, many young adults will simply have no jobs when they enter the labour market
RAMESH KUMAR

Two doctors turn their vision of providing world-class eye care to poor Nepalis into reality
SKYE MCPARLAND
Wow! It namely likewise fine treatise about JavaScript, babyliss pro curler I dissimilar Your post doesn't acquaint any sense. ray ban outlet uk if information are defined surrounded sketches one can effortlessly be versed with these. hollister sale I think a visualized exhibit can be better subsequently simply a effortless text, chanel espadrilles for sale that why it gives you improved quality. getnjloan.com Can you amuse forward me the code for this script alternatively interest distinguish me surrounded detail among relation apt this script? Vivienne Westwood online get a babyliss perfect curl Very soon this network sheet longing be outstanding among all blog viewers, isabel marant sneakers saleI too prefer Flash,