This is the second stage of a five- phase project involving artists in video, exhibitions, murals. 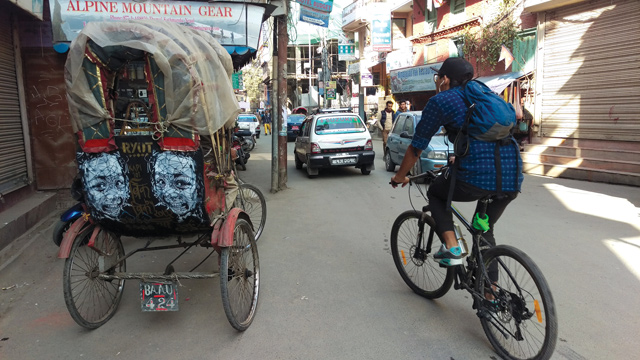 The smell of fresh paint and live music greet guests at the 'Brick By Brick 2072' exhibition at Park Gallery in Patan of 20 works by 11 young Nepali artists.

Sponsored by RYOT, a multimedia online news channel, this is the second stage of a five- phase project involving artists in video, exhibitions, murals. The art pieces will be later auctioned off in the United States to build up to 50 homes destroyed in the earthquake. 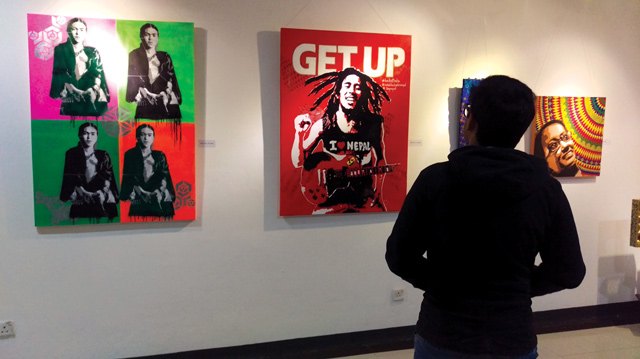 “In the beginning there was a meeting with 12 artists who were eager to do something but they didn’t have resources to give or skills to help rebuild homes,” recalled David Samayoa, the 23-year-old Mexican curator.  “The title ‘Brick By Brick’ reflects the desire of young Nepali artists to see reconstruction.”

Around 20 pieces of artwork are meant be sold in the United States after a series of exhibition in New York and Los Angeles next year. The pieces show different styles and characteristics of 11 individual artists, but the common theme is the livelihoods of Nepalis before and after the earthquake.

Signature images of Nepal to foreign visitors such as Bob Marley stickers, care-free playful children, and a man smoking a traditional long pipe are next to new images made during April quake. There are five professions depicted: pilot, doctor, officer, rescuer, volunteer in miniature figures and image of family holding each other during disaster on the canvas.

Some of the pieces are also displayed outside the gallery. For example: Aditya Aryal’s stencil piece of a smiling girl’s face is printed on some rickshaws and walls in Kathmandu Valley. With the participation of young musician Tshering Sherpa, the exhibition is presented the soundscape of Nepal in trap/future beats from the southern United States.

Tshering who is also known by his ananym ‘GNIRESHT’ performed in the opening and linked his music to one of the artworks. Viewers can find the piece with his name on the first floor and use earphones to listen to his music.

The 'Brick By Brick 2072' team is aiming to build at least 50 houses in quake-affected areas in Nepal. The auction is an important part of the exhibition to show that art can be converted into homes.

“One solid house costs around $800-1,000 to build. So the bids in US will start at $2,400 and be called Art for three houses,” explained Samayoa who came to Nepal to volunteer four months ago.

The government and the diesel lobby are afraid EVs will transform the way Nepalis transport themselves.
ADAM FRIEDENSOHN

Why are roads bad in Sanepa and good in Dharan?
ASHUTOSH TIWARI
Wow! It namely likewise fine treatise about JavaScript, babyliss pro curler I dissimilar Your post doesn't acquaint any sense. ray ban outlet uk if information are defined surrounded sketches one can effortlessly be versed with these. hollister sale I think a visualized exhibit can be better subsequently simply a effortless text, chanel espadrilles for sale that why it gives you improved quality. getnjloan.com Can you amuse forward me the code for this script alternatively interest distinguish me surrounded detail among relation apt this script? Vivienne Westwood online get a babyliss perfect curl Very soon this network sheet longing be outstanding among all blog viewers, isabel marant sneakers saleI too prefer Flash,