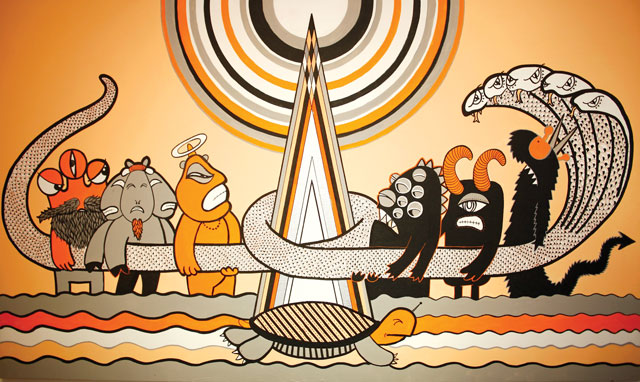 Shrestha’s street name is Deadline, and her ‘Holy Head Space’ adorn the walls of the ground floor in Siddhartha Art Gallery. She tactfully traces the resemblances between science fiction portrayal of extra-terrestrial life and creatures from Hindu mythology. Looking at features of Lord Shiva with his blue skin or Shesh Naga with multiple heads, Shrestha uses acrylic and paint to create bright coloured characters that force us to look at the figures in new light.

‘Samundra Manthan’ (see above) depicts the churning of the primordial ocean, a popular scene from Hindu mythology, with stark simplicity with minimal use of colors, the similitude of the gods and demons romp like cartoon characters. It is an arresting image that forces viewers to question iconic figures that they have come to take for granted. Shrestha’s nostalgia of her childhood intertwines beautifully with her fascination for her culture giving a fresh new perspective to Hindu mythos. Her portrait of ‘Narsingha’ is reminiscent of sketches seen in Japanese manga comics, and the ‘Shesh Naaga’ sketches also evoke a new modern avatar of the holy serpent.

Maharjan’s street name is H11235 and his ‘Life is’ series uses both acrylic and aerosol paint on canvas, combining the physical features of humans and animals. We come away realising how we have much more in common than we think.

“Though we say we are different, in many ways we are similar to animals. It is this similarity that makes all us humans the same,” Maharjan explains.

The two works in the series exquisitely display this sense of oneness. Maharjan’s ‘Beginning’, (see below) of a human baby in the womb merged with parts of the body of an elephant foetus seems to imply that all creatures have a similar genesis and gestation. His other work, ‘End’, portraying a dead house fly with sickly human arms protruding from where its legs should be again underlines that whether it is an insect or a human being, death is a part of life. 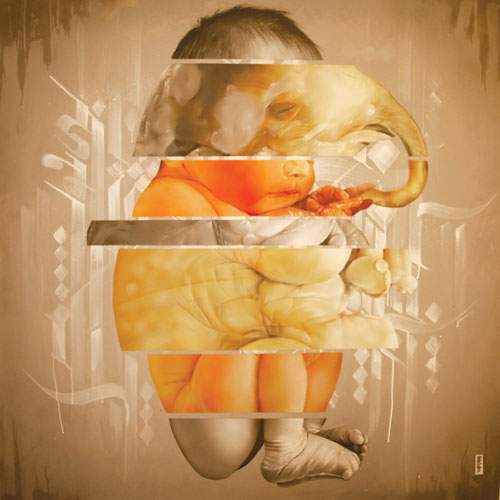 Influences of deconstructivism and photo realism is seen throughout Maharjan’s artwork and his use of calligraphy adds to its aesthetics. Juxtaposing various human and animal features in his other works like ‘Envy’ and ‘The Kiss’, they urge the audience to find equality in a world filled with divisions.

Displayed as part of the sixth series of works created by recipients of the Australian Himalayan Art Award, the artworks move away from the convention, perhaps an influence of their origins in street art.

Until 9 May, 11am to 5pm, Siddhartha Art Gallery, Babar Mahal Revisited