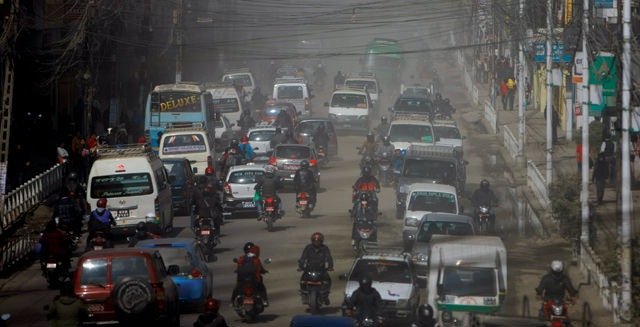 It didn’t use to be like this. Winter was the time of deep blue skies and dazzlingly clear views of the Himalayan peaks to the north. This year, Kathmandu did not even have to wait for winter for the air pollution to become hazardous thanks to a combination of smoke from crop residue burning in the Indian plains, and dust from Kathmandu’s earthquake reconstruction and never-ending road-widening project.

What is most alarming is the looming health catastrophe triggered by this perpetual pollution. Hospitals report a surge in patients with chronic obstructive pulmonary disease, emphysema and even lung cancer.

Kathmandu's air quality PM2.5 concentration
Infogram
Source: Drishti The PM 2.5 levels that are being compared were recorded on the first day of each month.

An online survey by Code For Nepal, #BreatheFreely, sheds light on the negative consequences of breathing this toxic air. Not surprisingly, most of the responses were from Kathmandu Valley.

Of the 789 answers collected earlier this year, a staggering 76% stated that their health has been affected by the air pollution. Most cited were breathing problems, chest pain and eye infection.

‘I can’t walk or ride my motorbike freely. I have to cover my whole body, from head to toe, just to block out the dust. If I don’t use a mask, I’ll have to suffer from the ensuing tonsilitis and dust allergy,’ wrote one respondent.

The situation is even more difficult for people with existing respiratory problems: ‘I am an asthma patient and also have an allergy to dust and cold. So I have to think twice before I go out for a walk or even ride a scooter. Because of the pollution I have increased my meds to twice a day.’

% of Kathmandu residents who say their health is impacted by air pollution
Infogram
Source: Code for Nepal

One respondent even stated that the primary motive behind his decision to study abroad was to get away from Kathmandu’s worsening pollution. Others noted that it is not only physical health that is impacted: ‘The pollution increases my stress level and I become irritated very easily when travelling between home and work.’

Nearly 64% of respondents stated that they used masks on a daily basis. While air pollution is a round-the-clock problem, most said the period between 12-4pm was when the air quality was worst, probably because that is whenthey were out and about. Data collected from air monitoring stations by the group, Drishti, showed daily peaks in PM2.5 (the most harmful particles less than 2.5 microns in diameter) in the mornings and evenings in winter at 10 measurement stations in Kathmandu Valley.

Drishti’s data also show that PM2.5 levels were highest from January to March 2016, reinforcing how inversion during winter months creates a dust-bowl effect, increasing the concentration of pollutants. The levels of fine particles were significantly higher between 8-11am.

One respondent pointed out: ‘There isn’t a single hour when Kathmandu air is clean, except while it’s raining.’

People from Kathmandu are used to complaining, but they also have solutions to the pollution crisis. The Code for Nepal online survey elicited suggestions, including the ones below:

b. Minimise re-suspension of roadside dust. (proper collection and disposal of dust generated)

b. Motivate citizens to use public transport.

Most of the pollution comes from dust due to the ongoing road expansion, old vehicles and, recently, from digging roads for Melamchi. The government needs to do the following:

a. Ban old vehicles (15 years and above)

b. Black top roads as soon as possible

c. Bring in policies so that road expansion, Melamchi are finished

a Better management of road construction, contractor should be severely fined for mismanaging the site and causing health hazards

b. Zero tolerance of polluting vehicles with emission checks. 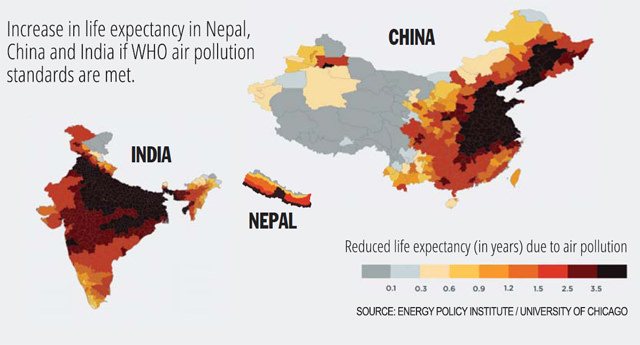 Ajay Dixit in Kantipur, 13 May

"We don’t have to do as India says"

Madhesi groups will now have to move to the next stage
PRASHANT JHA
Wow! It namely likewise fine treatise about JavaScript, babyliss pro curler I dissimilar Your post doesn't acquaint any sense. ray ban outlet uk if information are defined surrounded sketches one can effortlessly be versed with these. hollister sale I think a visualized exhibit can be better subsequently simply a effortless text, chanel espadrilles for sale that why it gives you improved quality. getnjloan.com Can you amuse forward me the code for this script alternatively interest distinguish me surrounded detail among relation apt this script? Vivienne Westwood online get a babyliss perfect curl Very soon this network sheet longing be outstanding among all blog viewers, isabel marant sneakers saleI too prefer Flash,