Nisha Budha found her freedom, and hopes to free her sisters in Jumla as well
Smriti Basnet 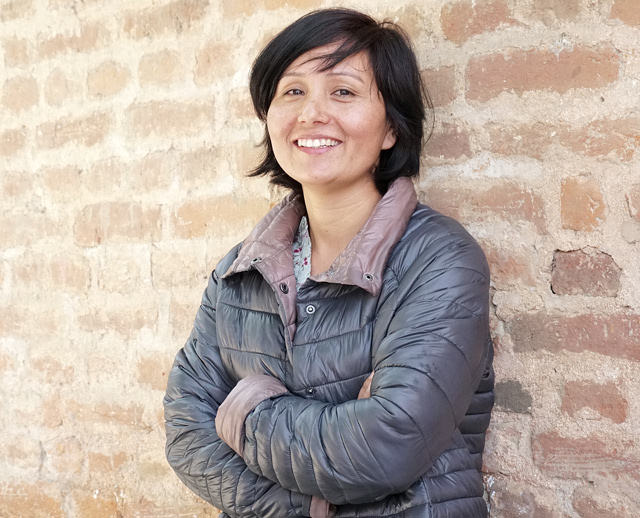 Clad in a hefty down jacket and a pair of rugged jeans, Nisha Budha looks like an average Kathmandu urbanite. But she is anything but average.

Born in a village near Jumla Bazar, Budha grew up in a family and community steeped in patriarchy, alcoholism, dated norms and taboos. The accumulation of these experiences led the 31-year-old to consciously make some bold decisions with the support of her family.

Her father, a businessman, played an important role by educating all his six children. He took Nisha on trips to India where she gained exposure to a different world, learnt new languages and ways of living.

“I grew up always asking ‘Why can’t I?’ I respect tradition, but I knew there were things in Jumla that were very wrong,” said Nidha Budha, who is profiled in the documentary Daughters of the Curved Moon that was screened at the Film South Asia documentary festival in Kathmandu recently.

Filmed over several years, the documentary is Budha’s coming-of-age story, as she returns to Jumla after six years of living and working as a trekking guide in Pokhara. The film follows the young woman as she questions age-old traditions, and tactfully provide her neighbours logical alternatives. Her progressiveness and no-nonsense approach to life are in stark contrast with the rigid mores of her home as she discusses sensitive issues like sexual health, menstruation and gender inequality.

Daughters of the Curved Moon was produced by Miranda Morton Yap and Sophie Dia Pegru who have successfully conveyed on screen Budha’s vivacious nature and contrast her childlike innocence with what it means to be a woman in Jumla even today.

Daughters of the Curved Moon from Sophie Dia Pegrum on Vimeo.

“My brother and I used to draw lots to see who would get to go with our father to India,” Budha told us during a break at the documentary festival. Her father enrolled her in a school in Chandigarh, where she learnt the value of education the hard way.

“I was a bad student in Nepal,”confides Budha recalling how she used to skip school and not pay attention to her studies. But in school in India, she was forced to mend her ways.

It breaks her heart to see many young women dropping out of school only to be married off by their parents. “Everyone keeps asking me when I am going to get married,” says Budha who has got used to dodging this question.

After graduating from school, she returned to Nepal in 2010 and was determined to stand on her own feet. She joined an eco-tourism training organised by Empowering Women of Nepal which was started by the trekking agency 3 Sisters in Pokhara. That is when she met Morton, who was impressed with her strength of character and commitment to social reform.

“I never knew Nepal was so beautiful, I felt proud as a trekking guide,”says Budha who has taken tourists to Everest and Annapurna Base Camps, Langtang, Upper Mustang, and Rara.

Budha’s next goal is to see more and more women from her village become independent. For this, she has inherited the priority her father placed on sending children to school, and his belief that educating girls was the key.

Growing up from being a tough girl to a wise woman, Nisha Budha counts herself fortunate among women in Nepal, who are often trapped by traditions and taboos. She says: “My father used to tell me I would remember him after he was gone, and that is exactly what has happened.”

Now, she hopes to pass on the values and life lessons she has learnt to other women in Jumla and beyond.

A favourite motif was to show political figures in various transsexual avatars, ministers with mammaries and exposed backsides.
SAUL SUBEDI
Wow! It namely likewise fine treatise about JavaScript, babyliss pro curler I dissimilar Your post doesn't acquaint any sense. ray ban outlet uk if information are defined surrounded sketches one can effortlessly be versed with these. hollister sale I think a visualized exhibit can be better subsequently simply a effortless text, chanel espadrilles for sale that why it gives you improved quality. getnjloan.com Can you amuse forward me the code for this script alternatively interest distinguish me surrounded detail among relation apt this script? Vivienne Westwood online get a babyliss perfect curl Very soon this network sheet longing be outstanding among all blog viewers, isabel marant sneakers saleI too prefer Flash,