Patan’s ancient chariot festival binds citizens with their rulers, and the cosmos 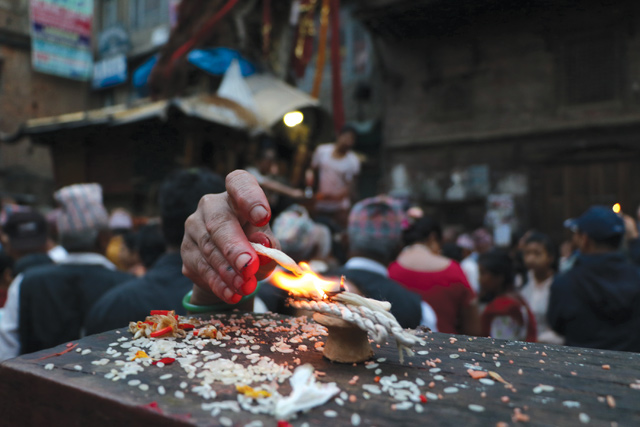 Heritage conservation has come to be synonymous with the restoration of temples and monuments, especially after the devastation of last year’s earthquake. But the disaster also threw into sharp focus the importance of preserving the culture and festivals of Kathmandu Valley.

The Rato Machindranath chariot was on its once-in-12-year traverse from Bungamati to Patan when the earthquake struck on 25 April last year. The shaking worsened structural weaknesses in the chariot and it was dismantled and rebuilt before continuing on its journey, highlighting the importance placed by locals on the festival of the red rain god.

“There is a close relationship between the jatra and the cosmos, it has always been the belief that it augurs the fate of rulers,” says anthropologist Bruce Owens, who has researched Machindranath for the past 34 years. Indeed, years when the chariot has caught fire or toppled have usually been followed by political upheavals.

In 2000, the chariot keeled over twice on its way to the Bhoto Jatra in Lagankhel officiated by King Birendra. Within a year Birendra, along with nine other members of his family, were killed in the royal palace massacre. In other years, chariot malfunctions have been followed by droughts or floods.

Nepal transitioned from monarchy to republic in the past decade, and during the hybrid period both King Gyanendra and Prime Minister Girija Koirala presided over the Bhoto Jatra. Today, the belief that the fate of the chariot portends the destiny of the king has been seamlessly transferred to the longevity of the government of the day, and thereby the wellbeing of the country and its people. 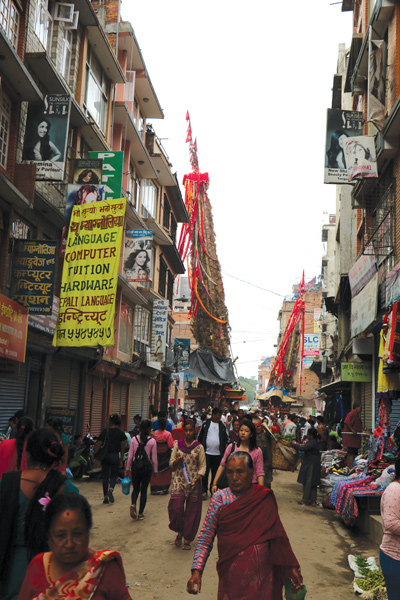 The festival was such a powerful cultural force in Kathmandu Valley that after the Shah conquest, the country’s new non-Newar rulers publicly worshipped at the Machindranath, Indra Jatra and other festivals to legitimise their rule.

“They transferred to themselves the cultural understanding of the king as the quasi-divine intermediary between the spiritual and temporal realms,” Owens explains.

There is an elaborate and colourful legend about how the Bodhisattva Padmapani Lokeswar, transformed into a bumble bee, travelled from Assam to Bungamati in a golden water pot. The red god resides in the Machindra temple in Bungamati except for six months in a year when it is drawn through the streets of Patan in a chariot.

Housed in a smaller chariot is Minnath, either the son or daughter (or both) of Machindranath, who has had a festival of its own prior to the deity arriving from Assam.

Every part of the chariot has religious significance and the coexistence of Buddhist and Hindu motifs. The yoke represents the Karkat Nag serpent which helped the deity travel from Assam. The four enormous wheels of the chariot with painted eyes represent Bhairavs, the red god’s bodyguards. And three directions of the chariot’s deck are graced by the vehicles of Brahma, Vishnu and Shiva. The presence of these deities made it acceptable for Kathmandu Valley’s Hindu kings to pay their respects to the Bodhisattva.

The red god had been taken out of the temple in Bungamati, ritually bathed and placed in the chariot when the earthquake struck last year.

The temple is still a heap of rubble 15 months later, and when the god returns to it next month, it will have to be sheltered in a temporary tin shed just like the priest and many of the still-homeless residents of Bungamati. 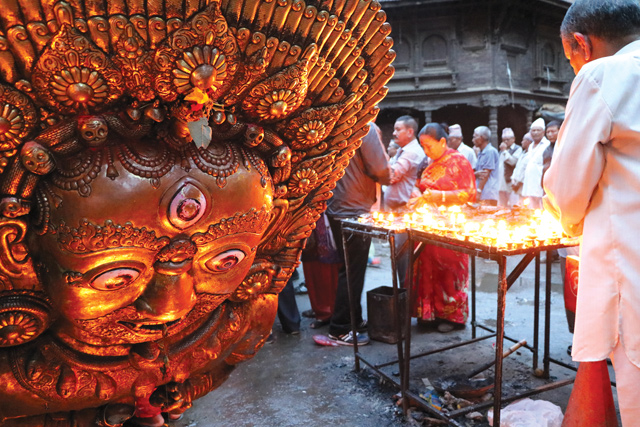 Despite the urbanisation and consumerism that has swept Kathmandu Valley in the past two decades, the Rato Machindranath chariot festival is more popular than ever. Before sunrise every morning this week in Patan’s Pode Tole, hundreds thronged to witness the ritual bathing of the god's reflection on a silver mirror.

“For us, the Machindranath festival is part of our living culture,” says Kulal Dongol of Jyapu Samaj in Patan, a society which has mobilised the youth to take part in every aspect of the festival. Unlike before, young women now play an increasingly dynamic and visible role in the activities. “The youth have taken ownership of the festival now, we don’t have to worry much about it disappearing in the future,” Dongol adds.

The renaissance of the intangible heritage of Kathmandu Valley is partly due to the rise of identity politics that has given Nepal’s indigenous people a renewed sense of pride in their cultures, and also because of the expanding urban middle class with its disposable income.

The climax of the festival is at Bhoto Jatra which this year falls on 27 July. This year history will once more be made because Nepal’s first woman president, Bidya Devi Bhandari, will be in attendance. On that day, the jewelled vest of Machindranath will be displayed from the chariot.

There is a complicated story about the symbolism of the vest, and it involves the Karkat Nag Raja’s wife who had her sight restored by a miracle. But whether one believes it or not, the reverence with which Nepalis from all classes, castes and ethnicities greet the sight of the bhoto in the presence of the President, Prime Minister and the country’s rulers imbues the chariot festival with a significance that links citizens with their rulers, to earth and sky, and the universe beyond. And it always rains on Bhoto Jatra.

The jury is out

"Either we finish what we started, or we get finished."
PRASHANT JHA

In Nepal, it's not just the government that is politicised
ASHUTOSH TIWARI
Wow! It namely likewise fine treatise about JavaScript, babyliss pro curler I dissimilar Your post doesn't acquaint any sense. ray ban outlet uk if information are defined surrounded sketches one can effortlessly be versed with these. hollister sale I think a visualized exhibit can be better subsequently simply a effortless text, chanel espadrilles for sale that why it gives you improved quality. getnjloan.com Can you amuse forward me the code for this script alternatively interest distinguish me surrounded detail among relation apt this script? Vivienne Westwood online get a babyliss perfect curl Very soon this network sheet longing be outstanding among all blog viewers, isabel marant sneakers saleI too prefer Flash,