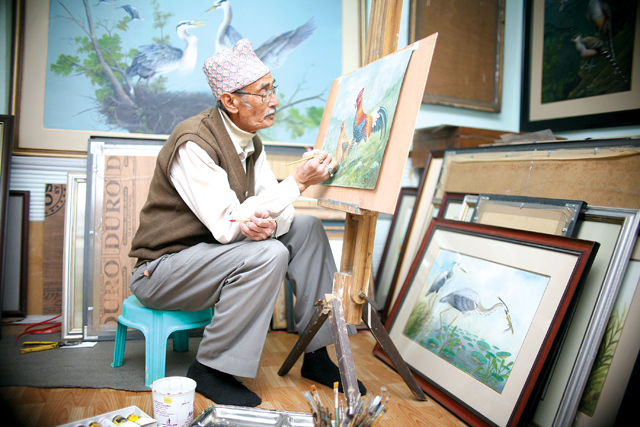 When Hira Lal Dangol was offered work as an illustrator for American ornithologist Robert Fleming’s field guide on birds, Birds of Nepal, in the 1970s, he had little idea it would change his life.

Fifty years and 3,000 bird paintings later, Dangol has become a household name in the world of nature art. Now, he has passed on his skills and passion to the next generation: his four children.

“I used to spend five to six days working on one painting and never felt like stopping till it was done,” said the sprightly 77-year-old.

Eldest son Pushpa Lal Dangol (pic, below) recalls having an extraordinary childhood. While his friends were doing homework, his ‘homework’ was to fill in colours on his father's bird watercolours. 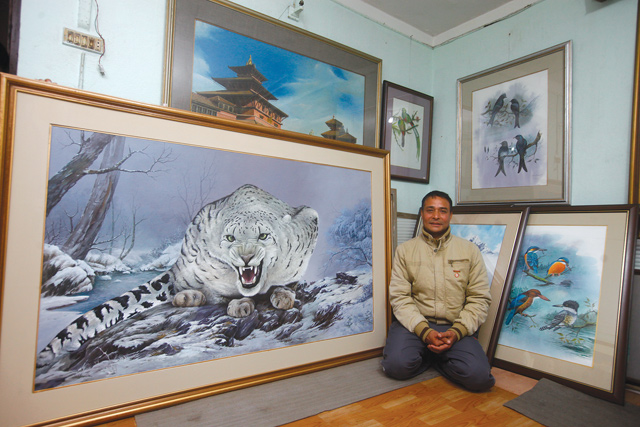 Four members of the Dangol family, Pushpa, Meena, Pratima and Iswor, held an exhibition of their bird paintings at Nepal Art Council last month as a homage to their father and his work.

“One has to be disciplined to paint birds. It needs to look realistic and has to be precise,” said Iswor Dangol, the youngest sibling. 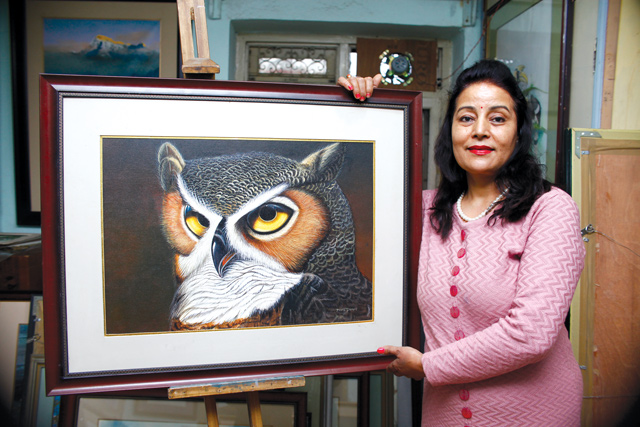 Growing up seeing their father's work from dawn to dusk, eldest daughter Meena (pic, above) feels their upbringing was entirely different compared to other children in the neighbourhood. While their friends were playing outdoors, the Dangol children were busy painting.

“We didn’t know when we stopped being just us and started being artists,” recalled Meena.

Hira Dangol used to be a paubha painter, and it was under the tutelage of noted artist Lain Singh Bangdel that he started painting birds, and it was Bangdel who introduced him and fellow artist, Hem Poudyal, to Robert Fleming. 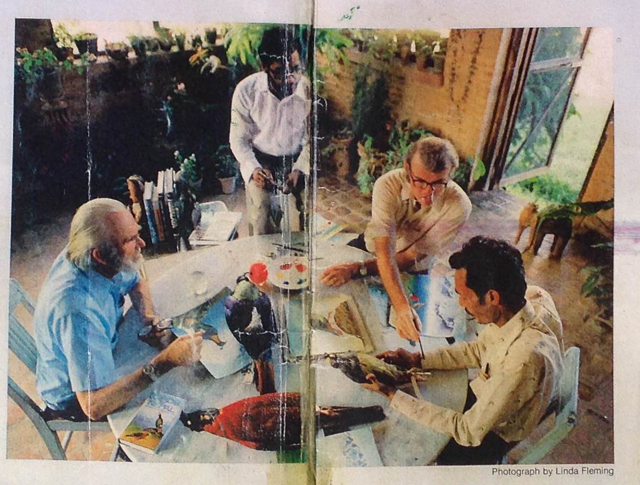 Pic: Linda Fleming
A print-out of a picture taken of Robert Fleming Sr. (pictured left) discussing bird art for his book, Birds of Nepal, with (anti-clockwise) Hira Dangol, Robert Fleming Jr and Hem Poudyal published in an international wildlife magazine in the 70s.

Much like his father, having a regular job never excited Pushpa. “Today the youth seem to prioritise money over earning a good name,” said the eldest son who returned to Nepal recently after spending 12 years in United States.

Pushpa has moved on from portraits of single birds to include their habitat as well. He is now also trying his hand at painting Nepal’s other wildlife, showing us a massive wall painting of a snow leopard.

Meena, on the other hand, has specialised in painting birds of prey. “It is their eyes that fascinates me the most, they signify power,” she said, pointing to her painting of a Horned Owl.

Pratima (pic,below) has chosen to paint different variety of birds of the same family on a single canvas. In the recent exhibition she had watercolours depicting in the minutest detail group portraits of Nepal’s avian diversity. 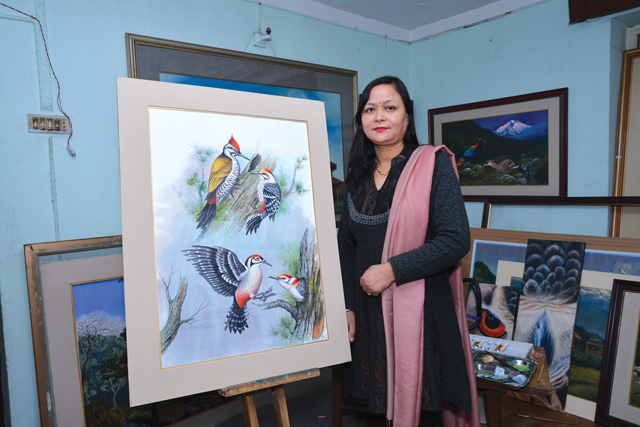 Iswor has found his calling in depicting smaller and rarer bird species. At the exhibition he had painting of tiny sunbirds that told the story of their migration and habitat.

Nepal’s location in the lap of the Himalaya means that it has 880 bird species, more than the entire North American continent. Migratory and resident species, however, are being threatened by habitat destruction not just in Nepal but along their annual transcontinental flight paths. 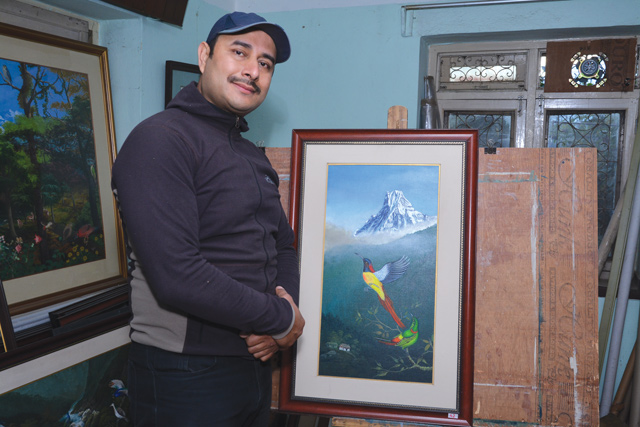 Iswor (pic, above) remembers Baya Weavers, a common sight during his childhood in Kathmandu and now rarely spotted, and paints them from memory.

Hira Dangol had to close his Dangol Art Gallery in Kalimati during the Maoist conflict because business was slow. Now, the entire collection is in storage at the family home. Pratima has fond memories of the gallery because that was where, at just 14, she sold her first painting.

“We don’t have to depend on foreigners anymore to buy our paintings, Nepalis have started to buy art as well,” Hira Dangol says. But while the emergence of the art scene in Kathmandu and their own success has been heartening, the family says there is a need for a school specialising in wildlife art.

But for now, the Dangol siblings hope to follow the footsteps of their father who is as active as ever. Hira Dangol says his eyes are getting weak, but he is not one to give up. Of his father and mentor, Pushpa says: “It is only because of our dad that we, his children, are active too.”

Annapurna Post, 15 May
Wow! It namely likewise fine treatise about JavaScript, babyliss pro curler I dissimilar Your post doesn't acquaint any sense. ray ban outlet uk if information are defined surrounded sketches one can effortlessly be versed with these. hollister sale I think a visualized exhibit can be better subsequently simply a effortless text, chanel espadrilles for sale that why it gives you improved quality. getnjloan.com Can you amuse forward me the code for this script alternatively interest distinguish me surrounded detail among relation apt this script? Vivienne Westwood online get a babyliss perfect curl Very soon this network sheet longing be outstanding among all blog viewers, isabel marant sneakers saleI too prefer Flash,