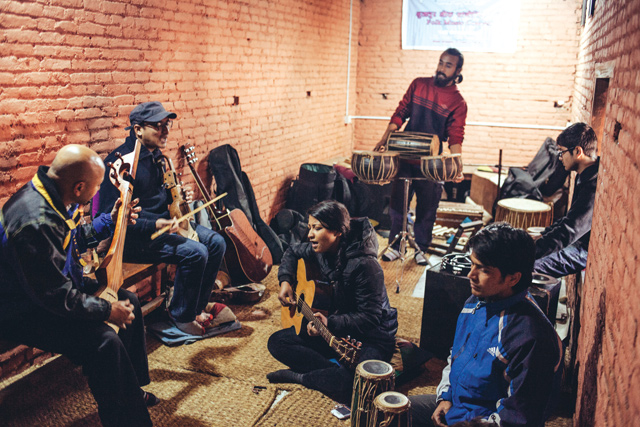 PICS: INTERNATIONAL ALERT
FREE EXPRESSION: The Nepali band, Night, whose member Jason Kunwar performed with A R Rahman in the new album, Peace Tracks, which was released at the International Talking Peace Festival in London this week.

On Friday, as Nepalis were busy celebrating or burning the new constitution, a local folk band announced a collaboration with India’s Oscar-winning composer, A.R. Rahman, on a new musical track.

“We are privileged to announce that our band-mate Jason Kunwar, on behalf of Night, had a chance to collaborate with A R Rahman,” read a message on Facebook.

The two worked together on Ot, a mellifluous new song in which Kunwar plays the flute and dhime, and is among eight tracks of an album that features names like Black Sabbath, ABBA and Duran Duran.

“I hope this track and the collaboration with Night helps to inspire a positive change on the International Day of Peace and beyond,” said Rahman, famous for his lyrics in the movie, Slumdog Millionaire.

The album, Peace Tracks, was released that day as part of the International Talking Peace Festival, an arts and cultural event being organised in London by the peace-building group, International Alert. Nepali performers, including Night and other influential artists, are performing. Participants will also discuss conflict issues and ways to maintain peace not just through talks but comedy, art, food, poetry, photography and technology. 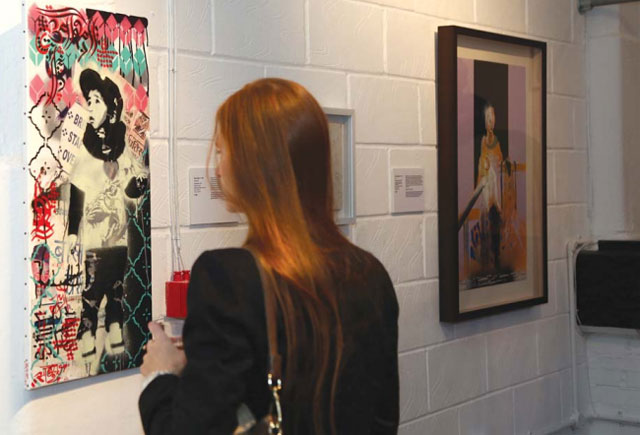 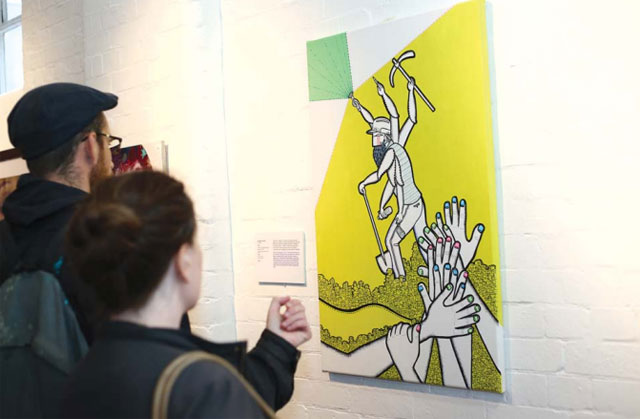 Viewers at the London festival looking at the artworks of Shraddha Shrestha and Aditya Aryal.

“We think it is appropriate for Nepali artists to have a strong representation in our peace festival,” Chandani Thapa of International Alert told Nepali Times. She hopes that their participation will highlight Nepal’s cultural achievements and positively shape how foreigners look at Nepal.

Indeed, the timing couldn’t be better. The April earthquake killed nearly 9,000 people in Nepal and destroyed some of Kathmandu’s cultural heritage, and trekking trails. On Sunday, a new constitution was promulgated, but it threatens to prolong the turmoil.

“Political instability has spread chaos and fear among the people. The recent earthquake has made the situation worse,” says Aditya Aryal (Sadhu X) a Nepali street artist participating in the event who has been painting murals on public walls and buildings in Kathmandu.

“This artwork is about not losing hope. It is about rising up and finding our peace of mind,” says Aryal, who has a piece titled Hope in the event.

Shraddha Shrestha, another street artist, is one of 20 taking part in #Art4Peace, a global campaign from International Alert that uses art to inspire conversations about conflict and peace. Shrestha, who goes by the name of Deadline, has a piece titled And We Were One.

“When the earthquake struck, we experienced true unity. The disaster taught us that we can achieve anything peacefully if we unite,” she says.

‘Talking peace’ is a theme that runs through the entire event and features a culinary experience, too. Conflict Café, for instance, brings together chefs from countries that have experienced violence. In ‘Conflict Café: Armenia and Turkey’, chefs from both countries, which share a historically bitter relationship, will collaborate to serve a feast. Conflict Café will also serve Middle Eastern, Colombian and Nepali food. The aim of the café is to stimulate interest in conflict regions and break down barriers with the ‘power of food’, as International Alert puts it.

Thapa hopes for more participation of Nepali artists and hopes a similar festival should also be brought to Nepal. Indeed, at a time when ethnic and geographic divisions are being dangerously highlighted in the country, such a festival could emphasise unity and peace.

“Especially after the promulgation of the new constitution, such a festival can be a starting point for bigger conversations around peace,” she says.“Art, music, food can really break down barriers.”

The festival will be held in London until 3 October, 2015.

Peace Tracks can be downloaded here:

Corrupt at the roots

Don't wait for a disaster to be reminded about insurance
PAAVAN MATHEMA
Wow! It namely likewise fine treatise about JavaScript, babyliss pro curler I dissimilar Your post doesn't acquaint any sense. ray ban outlet uk if information are defined surrounded sketches one can effortlessly be versed with these. hollister sale I think a visualized exhibit can be better subsequently simply a effortless text, chanel espadrilles for sale that why it gives you improved quality. getnjloan.com Can you amuse forward me the code for this script alternatively interest distinguish me surrounded detail among relation apt this script? Vivienne Westwood online get a babyliss perfect curl Very soon this network sheet longing be outstanding among all blog viewers, isabel marant sneakers saleI too prefer Flash,