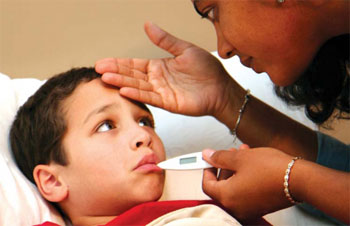 Typhoid is a common illness in Nepal. But are there instances when a patient looks like he or she has typhoid fever and it turns out to be something else? At Patan Hospital we had clearly suspected this may be the case, but had never quite proved it in a scientific manner.

There were serological diagnosis of various organisms resembling typhoid, but these tests are not always fool-proof because there is the chance of getting mixed up (cross- reactivity) with other organisms which also appear serologically alike.

A little-known, but landmark study carried out in 2008 called, Murine Typhus and febrile illness, Nepal, looked at the possibility of one other important, common cause of fever in Nepal besides typhoid. We focused on typhus (specifically, murine typhus) because first there was, as mentioned above, the evidence of the non-diagnostic positive serological tests and second, the commonness of rodents in Nepal. Indeed, this murine (which actually denotes rodents or rats) typhus organism (called rickettsia) is carried by fleas on rats. These fleas transmit the disease to humans when their faeces contaminate the area on the person’s body where the bite takes place.

The incubation period for murine typhus is about two weeks and the patient suffers from fever, headache, cough, and generalised malaise. Unlike other places where this disease is endemic, in Nepali patients, we found no rashes. These symptoms look exactly like typhoid fever and that is where the confusion arises and may lead to a misdiagnosis.

The test employed to diagnose murine typhus was a PCR (polymerase chain reaction) test, a modern, DNA-based study that makes the diagnosis almost certain. We tested 85 blood samples from patients whom we suspected to have typhus. Fifty of these patients had a positive PCR diagnosis for typhus (for various reasons we actually think these numbers reflect an underdiagnosis).  However, the sheer sample size of this final diagnosis makes this an impressive finding.

Unfortunately, PCR tests are very expensive and not available in most hospitals or clinics in Nepal. Keeping this drawback in mind, we tried to figure out if clinically (that is without blood tests, just based on signs and symptoms of the disease) if these PCR-diagnosed typhus patients were different from regular typhoid patients. But there were no clinical characteristics that clearly distinguished typhus patients from those with blood-culture positive typhoid patients.

Medical textbooks mention that murine typhus patients, in contrast to typhoid patients, have more respiratory problems like shortness of breath, cough, and findings on chest X-ray. Although our initial findings did show this to be the case, the final statistical testing did not bear this out. Interestingly, our study revealed that most people who had murine typhus were women from Kathmandu with high fever in the winter.

The findings from the 2008 study are very important because they have the potential to change prevalent therapy. Many antibiotics used for typhoid are not very effective in treating typhus fever and because typhus and typhoid are common and generally indistinguishable, it is vital to use proper antibiotics at the outset. Since similar environmental conditions prevail in our region, the diagnostic finding of murine typhus is not limited to Nepal and applies equally well to other countries in the Subcontinent. Hence this article Emerg Infect Dis 2008 ; 14(10): 1656-1659, which is easily available online, needs to be read by all healthcare professionals while dealing with treatment of fever in South Asia.