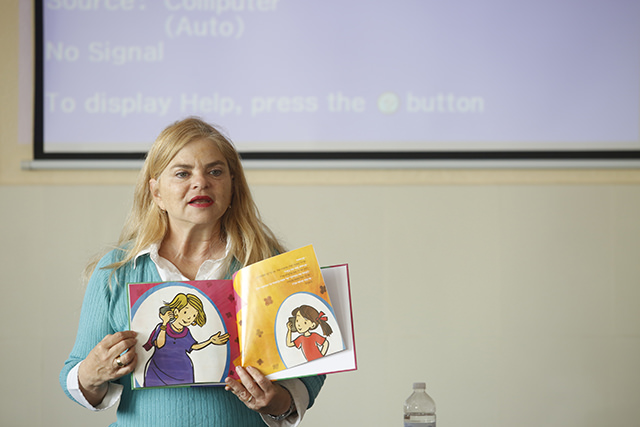 Periods of upheaval foster creativity, and make for rich literature on subjects like war, domestic violence, discrimination or social injustice. However, how to write about these issues for children in a meaningful way?

That is what Israeli author Smadar Shir tries to do in her books for children: tackle heavy topics like war by writing about it through the eyes of a dog, giving it a refreshing angle, adding a little humour, and making it relatable at the same time.

In writing about violence for children, Shir falls back on her own family’s experience. Much of her life has been spent amidst conflict and violence in a volatile region. Her 15-year-old daughter has already witnessed three wars, spending numerous nights in bomb shelters.

However, even in those bleak times Shir says her family continued to have faith and remained hopeful for better times. 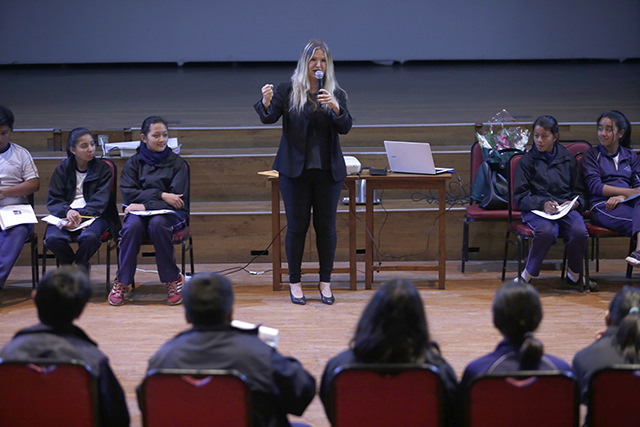 “Even though it is just a tiny little ray of light, it will guide you through the darkness,” says Shir whose books are happy, cheerful, colourful and fun to read. She says it is not a good idea to be preachy or sombre when writing about conflict for young children: “I don’t write to educate. For that I can write an academic paper. I write to pass on my knowledge and experience to the next generation. I write to help children imagine futures.”

Shir was in Kathmandu last week with another prominent Israeli writer, Dorit Silverman, as part of a tour of South Asian countries where they interacted with students as well as writers of children’s literature. In Kathmandu, they visited several schools accompanied by the new Israeli Ambassador to Nepal, Benny Omer.

“It was a successful and enriching visit on both sides,” Omer told Nepali Times. “It was an opportunity to exchange information and experiences and a wonderful way to strengthen cultural ties between our two countries.”

Nepal-Israel literary relation goes back to 1965, when the then President of Israel had translated some poems of King Mahendra into Hebrew. Writers are currently working on publishing Nepali translations of some anthologies of Hebrew poems.

Silverman is the Vice president of the Hebrew Writers Association and has published 19 books, teaches literature at Israeli universities and is also a lawyer. In 2017 she won the Prime Minister’s Award for Literature.

Smadar Shir is a popular author of children’s books, senior journalist and songwriter and has written over 400 books for children and adults which have been translated into many languages. Her award-winning book The Tenth is currently being translated into Mandarin.

Although both their children have been to Nepal to trek, it was the first time in Nepal for both authors. They had imagined Nepal only as a mountaineering destination, but said they were fascinated by the culture and heritage of Kathmandu Valley.

“Nepal was much more colourful, beautiful, and lively than I had imagined, and I really enjoyed the momos,” quipped Shir. Silverman found Nepali students bright and intelligent, and said: “We are very impressed by all the children here, I can confidently say they are the future of Nepal.”

During their lecture and workshops at schools in Kathmandu, the two authors stressed the importance of childhood reading. Said Shir: “When I read and write I build myself a better world. Reading gives me the opportunity to believe that things can get better. It enhances communication and allows for smoother interaction.”

Silverman agrees, and added that reading empowers children to imagine and think for themselves: “It is great that children now have access to stories which are not just fairytales, but real stories which they can relate to, and which can help them deal with whatever the world throws at them.”

For far-west Nepal's dalits, the peace process has been a bitter return to old realities
NARESH NEWAR in NEPALGANJ

More bandas are not the way to go, but this one had a reason
DANIEL LAK

Or at least the chances they offer for progress
ASHUTOSH TIWARI

Talk to the tarai

Ghatana Ra Bichar, 20 December
Wow! It namely likewise fine treatise about JavaScript, babyliss pro curler I dissimilar Your post doesn't acquaint any sense. ray ban outlet uk if information are defined surrounded sketches one can effortlessly be versed with these. hollister sale I think a visualized exhibit can be better subsequently simply a effortless text, chanel espadrilles for sale that why it gives you improved quality. getnjloan.com Can you amuse forward me the code for this script alternatively interest distinguish me surrounded detail among relation apt this script? Vivienne Westwood online get a babyliss perfect curl Very soon this network sheet longing be outstanding among all blog viewers, isabel marant sneakers saleI too prefer Flash,