Tales of old Tibet have fascinated me since childhood: the chantefable of ancient manuscripts where heroes battled brigands and gods vanquished demons.

It must have come from the textures of my own infancy – as a little boy in a trading family doing business with Tibet, like so many others, in bustling Kalimpong, where fortunes were bartered and friendships were built for life. 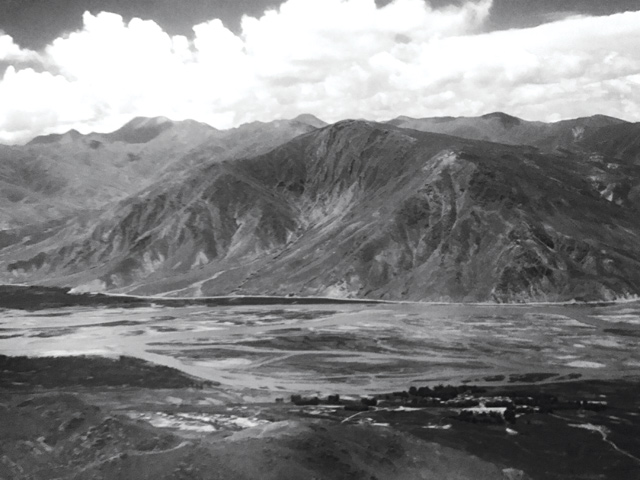 My prankish days were spent playing horse over mountains of wool and mounds of yak tails. We teased the mule trains that had traversed for months over the passes, and we risked whacks from the unsheathed daggers of irascible muleteers.

We saw things and we heard stories of a wondrous and perilous land of magic and mystery that was months away by foot, but felt close enough for everyday touch. One day it all vanished, and all I had was this novel by Henrich Harrer to show me a land I have always yearned to go to. 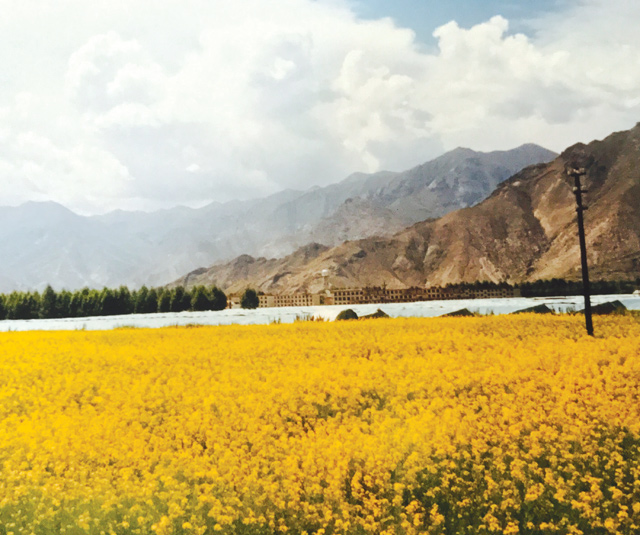 The closest I got to Lhasa and Kham is through the voice of my wife, Tseten, who was born in Lhasa but never was able to see her land. So she saw it through the eyes of her Pala.

These photos of a bygone era are from the collection of Tseten’s family, The Chamatsangs (one-time prominent trading house from Kham) and The Yuthoks (aristocrats of that old world). The picture of the ladies is from the Yuthok family’s collection and reflects how the nobility lived then in Lhasa, a distant cry from the farmers and nomads of greater Tibet. 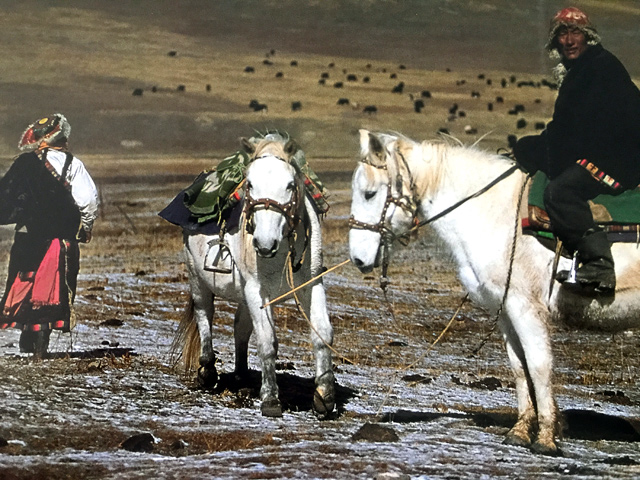 The picture of the milkmaid is reminiscent of how women folk worked in the villages. The images of the mountains and valleys are from different regions and cast their own splendour of a place in time. 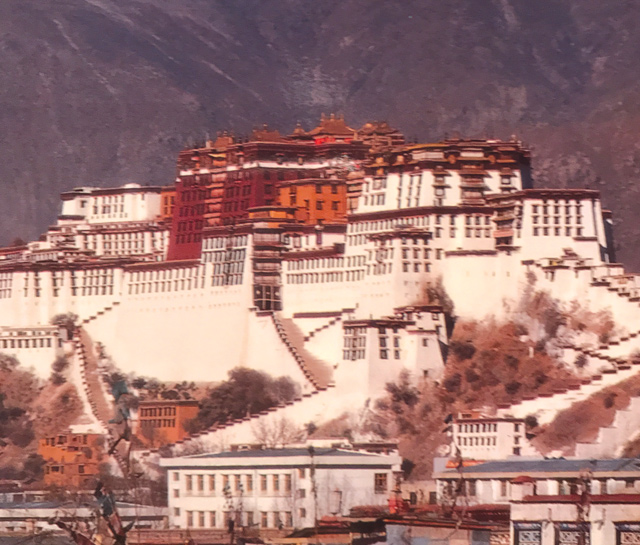 when you carried me

the magic, the music of

your legends and fables.

the secrets of the unsaid

How high does the eagle soar

to be above the gilded roof,

Does the white crane rest there,

on its way from the north,

or was it to the south? 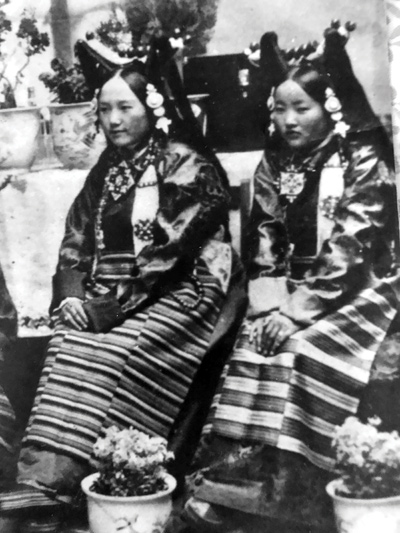 If the Stonewall hums with pilgrims,   and under the summer sun

in the happy river,

The one you called Lhasa

Where is Khesar now?

And why did the ragged minstrel

Sing rhymes of heroes and rogues?

In their boots and braids? 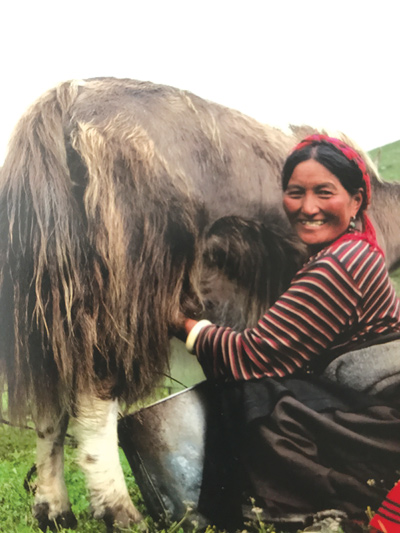 Does the milkmaid still lament

of home, heart and longing,

even as her tresses flirt.

Or is this all a figment of color

with its thousand panes

against the setting day?

And when does the swallow greet

the wildflower spring in Kham ?

Does the sky float in turquoise

where your white pony roamed? 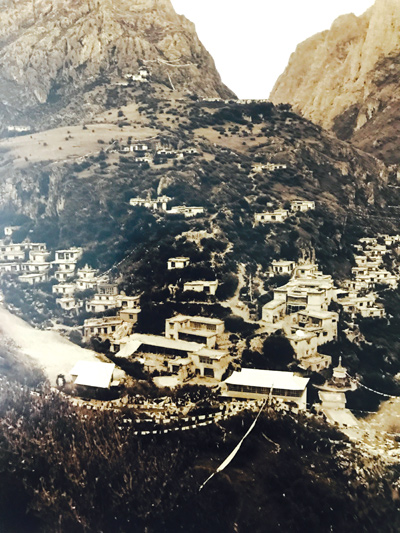 Do its meadows glide endlessly

And how liquid is that crystal

where the blissful hermit bathes.

How many days in the snows

and how many Koras

to where the Blue One meditates

on that centrifugal summit.

Do you think he’d be there,

or did he too leave

Does the night still shine of diamonds,

where the wind mates with the wolf?

Was it the greenest of green,

did you really draw clouds

such ones I can only imagine?

I wonder if the ranges sing freely,

where whispers turn to echoes

for the valleys up and below.

Is the juniper still pure,

Is the brook still clear?

Can this still remain as is

in this unseen vista

just as it was when I heard you,

I cannot say for sure

It’s always been this way for me

Didn’t matter where I was,

I have listened and I have waited

to fill this unfilled space

Tell me Pala once more again,

these tales of your land.

Nepalis have a curious penchant for the last-minute and the short-run.
ARTHA BEED

The taxman is after your money, and he'll get it even after you die.
BINOD BHATTARAI

Why Nepalis love to hate India

Nepal's age-old ties with India are just that: aged, old and fraying at the seams.
CK LAL

Maybe you can drive my car

If there is one time of the year when thoughts turn to buying a car, it is during the rains.
Wow! It namely likewise fine treatise about JavaScript, babyliss pro curler I dissimilar Your post doesn't acquaint any sense. ray ban outlet uk if information are defined surrounded sketches one can effortlessly be versed with these. hollister sale I think a visualized exhibit can be better subsequently simply a effortless text, chanel espadrilles for sale that why it gives you improved quality. getnjloan.com Can you amuse forward me the code for this script alternatively interest distinguish me surrounded detail among relation apt this script? Vivienne Westwood online get a babyliss perfect curl Very soon this network sheet longing be outstanding among all blog viewers, isabel marant sneakers saleI too prefer Flash,