The new translation of History of the Kings of Nepal- A Buddhist Chronicle aims to correct the mistakes and fill the gaps found in the earlier translation.
Madeline Zutt 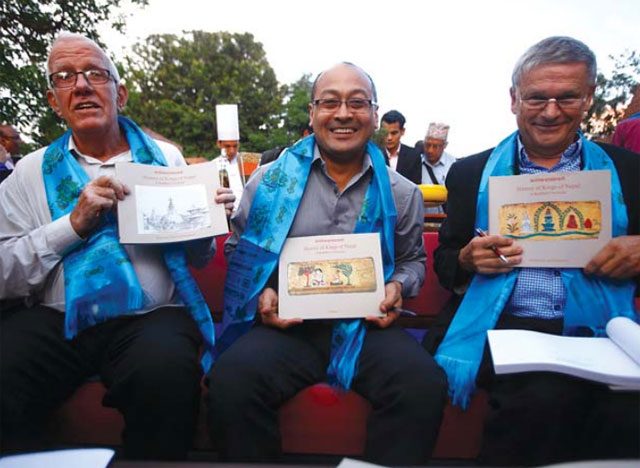 For a long time, the prevailing notion among Western historians was that Nepal did not have a rich historiography. This was mainly because Westerners did not know about Nepal’s vamsavalis.

Now, the 19th century Nepali chronicle, Nepalika-Bhupa Vamsavali, has been translated into English in a three-volume work, History of the Kings of Nepal – A Buddhist Chronicle and unlocks the secrets of Nepali history. The book was first translated by Daniel Wright in 1877 and while the ‘Wright Chronicle’ became the most readily available English translation of its time, it was incomplete and incorrect in many areas.

Wright failed to translate many obscure passages and he often misidentified places and misunderstood important concepts. This new translation aims to correct the mistakes and fill the gaps found in the earlier translation.

The volumes were released on Wednesday at the Taragaon Museum in the presence of the authors, Axel Michaels, Manik Bajracharya and Niels Gutschow (pic, above) all of whom are based at the [Heidelberg University](Heidelberg University ) in Germany. The event was organised by the Hyatt Regency Kathmandu in conjunction with the Saraf Foundation for Himalayan Tradition and Culture, South Asia Institute, Heidelberg University and Social Science Baha.

Michaels, who is the Head of the Department of Classical Indology at Heidelberg University, hoped the volumes would reignite interest in Nepal’s history. The first volume of the book includes the original Nepali text of the chronicle that includes sections in Newari and Sanskrit. The second volume has unpublished drawings (including one by 19th century Nepali painter Rajman Singh) and maps dating back to 1850.

Gutschow who lived in Bhaktapur for many years but is currently based in Germany put his passion for history to good use by digging up much of the material in the book. Bajracharya is a Nepali research fellow at Heidelberg University who helped make sure that the English translation stayed close to the original text.

As an emerging cultural hub of Kathmandu, Taragaon Museum was the perfect location for the book launch.
The three authors spoke about Nepali historiography and noted that it is mainly about tale-telling, an entangled past where myths and legends are mixed with facts. While Nepali historiography may not be as scientific as it is in the West, it does not make it less valuable. Nepal’s future depends on its history. Nepali historians are not being read and appreciated as much as they should and hopefully this new book will renew an interest in the country’s history.

When asked what effect he expected this book to have both at home and abroad, Bajracharya replied: “It will show Europe that Nepal has a chronological sense of time. The books encompass a large, beautiful history and are a one of a kind work.”

The Valley from the air, 41 years ago, Kunda Dixit

The stone amidst the wood, Kunda Dixit

Memes are the very building blocks of culture.Not every meme is a big idea,but any meme with the right stuff can go global once it hits the Internet.
KARL HODGE IN LONDON

Who says women are the weaker sex in sport?

Men need to keep women weak,off the football field and out of the boxing ring,so they can continue to feel strong.They do this by criticising muscular women,announcing they are unfeminine,whispering that they are probably lesbians.
SHARON KRUM

As the English Premier League kicks off,Manchester United fans, like this rickshaw puller in Thamel, are awake past midnight watching their favourite team on cable.
ALOK TUMBAHANGPHEY

Drugs will be simmering beneath the surface at the Sydney Games.The criterion for success these days is not justwinning -but being able to win without being found out.
BARNEY REID IN MELBOURNE
Wow! It namely likewise fine treatise about JavaScript, babyliss pro curler I dissimilar Your post doesn't acquaint any sense. ray ban outlet uk if information are defined surrounded sketches one can effortlessly be versed with these. hollister sale I think a visualized exhibit can be better subsequently simply a effortless text, chanel espadrilles for sale that why it gives you improved quality. getnjloan.com Can you amuse forward me the code for this script alternatively interest distinguish me surrounded detail among relation apt this script? Vivienne Westwood online get a babyliss perfect curl Very soon this network sheet longing be outstanding among all blog viewers, isabel marant sneakers saleI too prefer Flash,