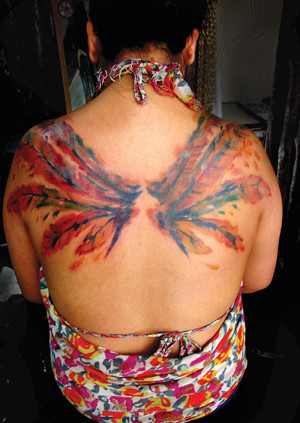 Long before red hearts, colourful butterflies, oversized skulls, and misspelled names of loved ones became permanent accessories among Nepal’s urban crowd, tattoos were an important ritual in the Newar and Tharu communities (see box). However, it took more than two decades for the body art to gain mainstream acceptance.

Today, an increasing fascination among the young and young at heart has opened doors for tattooistas, making it a viable profession. Monthly income of a professional artist in Nepal can range anywhere between RS 30,000 to 100,000, something that pioneer tattooer like Mohan Gurung (see below) couldn’t have imagined a decade ago when there were just a handful of studios struggling to do business.

With new parlours mushrooming every few months, customers are spoilt for choice. But there is a catch. Since tattooing is not recognised as a separate profession, owners currently register their studios as small cottage industries (like handicraft or photography enterprises) for which they don’t have to show any proof of training. Without certification or a monitoring mechanism, many studios fail to meet international health and safety standards.

The good news is that local artists determined to maintain a level of professionalism have stepped in to fill this gap. For the past three years, Mohan’s Tattoo Inn and Muaz Entertainment have been bringing together ink lovers for the annual Nepal Tattoo Convention. 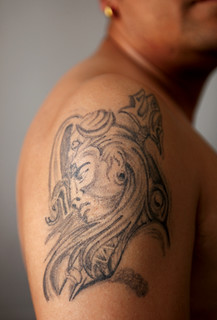 “We want to expose young, aspiring artists to the techniques of international tattooists so they understand the importance of following hygiene and safety guidelines,” explains Bijay Shrestha of Muaz.

This year’s festival will run for three days from 26 to 28 April at Hotel Yak & Yeti and see over 70 well-known local and international artists collaborate and compete against each other.

“Very few Nepali tattoo artists can afford to attend conventions outside the country. At this festival they get a taste of the international scene and can exchange ideas and learn new styles from veterans across the globe,” says Gurung.

What’s in this for you? You can get tattooed on the spot by any artist of your choice. So pick a design and pre-book. Your Facebook cover photo is begging for change, this is your chance.

Think before you ink

**Ask friends or family who have tattoos to recommend good studios and artists.

**Visit studios to see how clean they are. While you probably won’t be allowed to enter the work place, you can see how much importance owners place on hygiene by checking out the ‘public’ areas of the parlour.

**During your visit, ask if needles are changed for each client, if the seating area is cleaned regularly, and whether artists wear medical gloves.

**Go through the artists’ portfolio and look at their new and healed works to see if they have done designs that you are looking for. If the artists are experienced they will be able to suggest the size and design as well.

**Don’t let price be a deciding factor. If you are not willing to pay, then you should probably not be getting inked.

(Don’t) forget about the price tag

Tattoo studios in Kathmandu don’t have a fixed price. Clients are charged on an hourly basis. Depending on how experienced and popular an artist is, he /she might command anywhere between Rs 1500-3000 per hour. The price also depends on how intricate the designs are, the colours used, and the size of the tattoo. Unlike retail therapy, getting inked is neither a means to curb boredom nor to nurse a broken heart. So loosen those purse strings a bit.

Stamp from the past 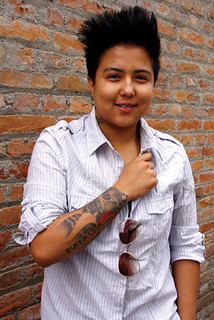 In Newari tradition, tattoos are believed to ward off evil and sickness. Tattooing is popular especially among the Tharu women. Known as godna in Tharu language, tattoos are inspired by natural elements. The tikaniya (artist) uses normal needles and natural black ink from lamp soot. The part meant to be tattooed is rubbed with cow dung and later cleansed with water. Then begins the painful process of marking the designs and pricking with the needle.

Mohan Gurung’s name is synonymous with tattooing, but the man started at the very bottom. After a trip to South Korea ignited a passion for body art, he spent hours practicing on friends and perfecting his skills.

Although his family were not supportive, he opened a small studio in his hometown of Pokhara in 2000 and then another one in Kathmandu. From a one-man shop, Mohan’s Tattoo Inn in Thamel is the most popular and busiest studio today where local and foreign clients queue up for months to pre-book. With almost two decades of experience, Gurung has not only single-handedly trained many young budding artists, but is also responsible for bringing credibility and professionalism to the job.

“Ten years ago, people looked down on us and treated us like we were thugs,” admits the humble veteran in his soft voice, “so it feels great to see our art being appreciated and tattooists getting the respect they deserve.” 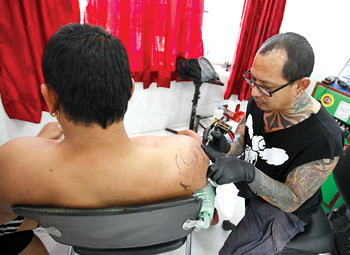 Weirdest tattoo: Can’t mention it in a paper (laughs)

One of the few female tattooists in Nepal, Sabita Maharjan trained under her husband, Prahlad, a popular tattoo artist before taking the plunge. “The first time I picked up a needle, I was scared. But my husband let me tattoo his leg. I haven’t looked back since then,” she says with immense pride. Together, the duo run Tike Jhya studio in Basantapur which is ranked among the top five tattoo parlours in the country.

Having worked as a professional artist for almost four years now, the 22-year-old has faced her share of challenges in a field that is still heavily male-dominated. “When customers find out that they are going to be tattooed by a female, they assume the quality of art will be inferior compared to those done by male tattooists,” she says. But there are loyal clients who specifically request for Maharjan because they feel safer under her needle. 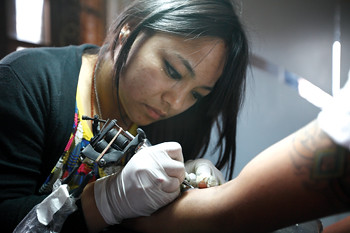 Weirdest tattoo: A tribal lizard inside the ear

A tattooist at JADS, Sudeep Khadka entered the profession by fluke. While studying for bachelor of fine arts, he saw friends making tattoos and got hooked. He then spent hours scouring the internet for lessons on body art and also trained under John Maharjan.

From building a tattoo machine at home from scratch using a tape recorder, motor, and pins, to tattooing professionally, Sudeep has come far, but he confesses that he still feels the nerves kick in before starting a new tattoo. “Tattooing is not an easy job. We are working with people’s bodies and their emotions. We can’t mess that up,” he says. 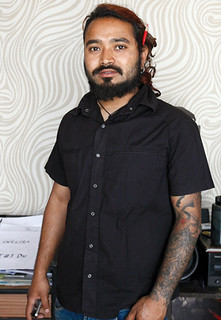 A self-taught artist, John Maharjan started tattooing as a teenager 10 years ago. Now 27, he runs JADS Tattoo Inc in Thamel. Unlike some of his colleagues, John says he was lucky to be supported and encouraged by his mother from the very beginning.

“When I started out, things were very different. Nobody respected the art form, most saw those with tattoos and tattoo artists as drug users and criminals,” he says. “Perceptions are changing and the condition of artists is also gradually improving.” Maharjan is also happy to see customers becoming more mature and putting more thought into what they want rather than just getting inked with meaningless motif. 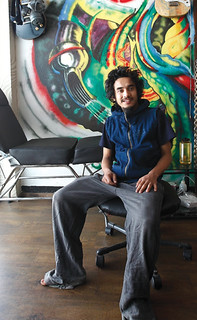 Longest tattoo session: Approximately 80 hours divided over 15 sessions on a back piece Weirdest tattoo: Can’t think of any

Not a drop to drink

Voice of the party

Something is still rotten in the state of Denmark
KUNDA DIXIT
Wow! It namely likewise fine treatise about JavaScript, babyliss pro curler I dissimilar Your post doesn't acquaint any sense. ray ban outlet uk if information are defined surrounded sketches one can effortlessly be versed with these. hollister sale I think a visualized exhibit can be better subsequently simply a effortless text, chanel espadrilles for sale that why it gives you improved quality. getnjloan.com Can you amuse forward me the code for this script alternatively interest distinguish me surrounded detail among relation apt this script? Vivienne Westwood online get a babyliss perfect curl Very soon this network sheet longing be outstanding among all blog viewers, isabel marant sneakers saleI too prefer Flash,