The return of Erina Tamrakar

In Between the Third Eye opens out the world of women, their feelings and emotions
Smriti Basnet 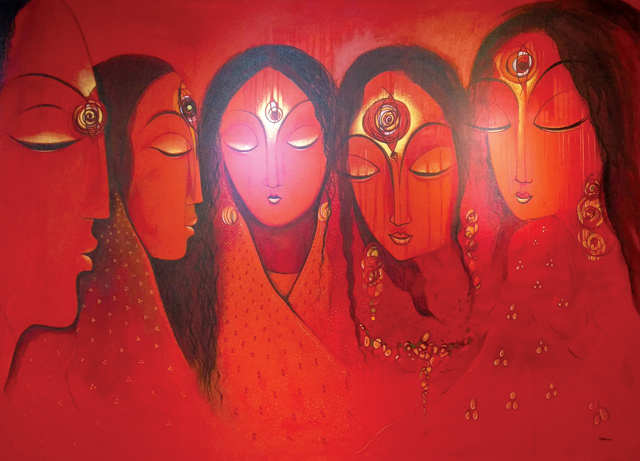 Artist Erina Tamrakar’s exhibition In Between the Third Eye opens out the world of women, their feelings and emotions to Kathmandu visitors exposed to the daily grind of a squalid urban life. Painted in hues of vibrant reds, blues, greens, the audience is compelled to connect with Tamrakar at two levels: sensual portraits that dazzle us and at the same time force us to think deeply about female empowerment and awareness.

“When I paint, I don’t paint with a concept beforehand,” said Tamrakar, who has returned to the exhibition circuit after two years. “It’s like the canvas and I have a conversation. I create as I paint.” 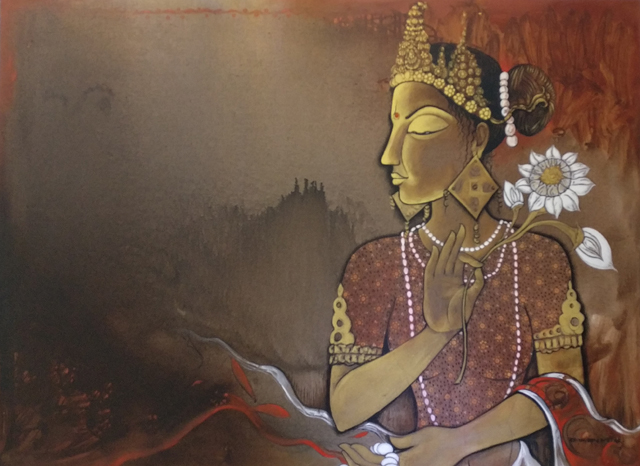 The exhibition contains her work from 2010 right up to some recent paintings, including from the popular series Third Eye and Mustang which are inspired by her travels. 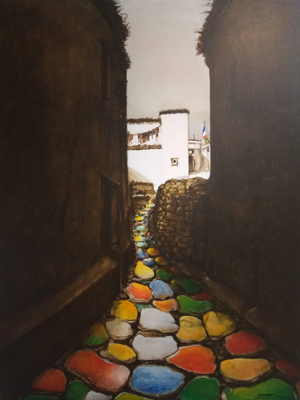 On entering the Park Gallery, the visitor confronts the canvas titled ‘Third Eye’ which is washed in red, and depicts a group of women with their eyes closed, but on each of their forehead the artist has painted the third eye.

“When we have to introspect, we close our eyes,” said Tamrakar for whom the third eye stands for awareness, the ability to know right from wrong. Disheartened by the growing number of cases reported for violence against women, the artist aims to inform her public about the importance of empowering women.

As in her previous works, none of the subjects directly look at the viewer. For Tamrakar, it is her way of making the audience engage with the emotions of her subjects rather than establishing direct contact.

The whole two floors of Park Gallery are filled with Tamrakar’s work, each carrying its own message. In some, women are on an equal footing with nature, in others the emotions of women are captured in a single artwork.

Tamrakar’s recent works also use monochromes, which portray an evolving society: paintings of women alongside safa tempos that they drive. “It’s a step forward for the society,” said the artist. She believes it is only with financial independence that women can fully free.

Apart from the theme, what sets Tamrakar’s art apart from her other paintings is her use of black and white. The artist hopes to sum up the torture that Nepalis went through during the five-month blockade with the use of sombre hues. “I didn’t feel like using any other colour at that time,” said Tamrakar, who has an entire series on the blockade, but is keeping it to exhibit in future.

In Between the Third Eye

A Nepali feminist in Japan

There will be darkness ahead

And you thought 12 hours a day was bad
DEWAN RAI

The light at the end of a dark tunnel

Energy economist Bikash Pandey is the director of Clean Energy Group, Winrock International. He spoke to Nepali Times this week during a visit to Nepal about some immediate and long-term steps that can be taken to reduce power cuts.

2009 is a make or break year for Nepal
ARTHA BEED

Gopal Guragain in Himal Khabarpatrika, 31 December-12 January
Wow! It namely likewise fine treatise about JavaScript, babyliss pro curler I dissimilar Your post doesn't acquaint any sense. ray ban outlet uk if information are defined surrounded sketches one can effortlessly be versed with these. hollister sale I think a visualized exhibit can be better subsequently simply a effortless text, chanel espadrilles for sale that why it gives you improved quality. getnjloan.com Can you amuse forward me the code for this script alternatively interest distinguish me surrounded detail among relation apt this script? Vivienne Westwood online get a babyliss perfect curl Very soon this network sheet longing be outstanding among all blog viewers, isabel marant sneakers saleI too prefer Flash,