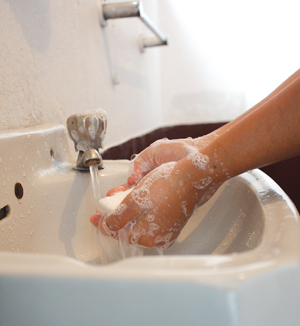 Countries and companies spend millions every year on public health research, but the results of these studies are not always applicable or relevant to Nepal. The 2002 study conducted in the slums of Pakistan, however, not only provides a blueprint for other countries in South Asia but also reinforces the belief that even simple, preventive measures can save lives in poor communities which lack proper health facilities and services.

Supported by US consumer goods giants, Procter and Gamble, the study aimed to see if a new antibacterial soap could prevent diseases. Field workers fanned out in 25 randomly chosen slum neighbourhoods in Karachi to distribute soap, some with triclocarban and some without. The two soaps looked exactly alike. They encouraged people to use the soap generously and wash their hands in these five contexts: after defecation, after cleaning an infant that has defecated, before preparing food, before eating, and before feeding infants. A family was provided two to four bars of soap, with regular replacements.

Eleven neighbourhoods used as a ‘control’ group received pens and paper instead of soap. They were free to continue using soaps as they had done in the past, but were given no supplies or health education. For one year, the fieldworkers conducted weekly visits to the families to check if their instructions were being adhered to and to collect data.

Analysis of the data revealed that children in households that received soap and proper instructions experienced a 50 per cent decrease in pneumonia cases and 53 per cent in diarrhoea cases as compared to the control group that wasn’t provided with soap. More surprisingly (and disappointing for P&G), using soap properly proved good enough to decrease incidents of diarrhoea and pneumonia in children. The triclocarban antibacterial agent in the soap did not provide any extra protection. 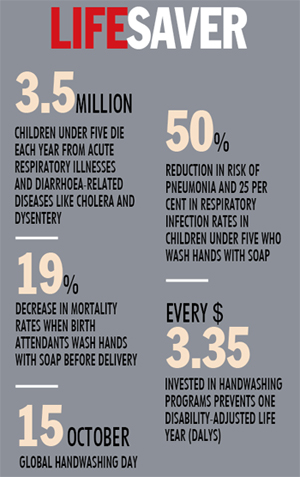 The discovery that normal soap and knowledge of how to use them could decrease people’s chances of catching diseases even in communities with widespread poverty, illiteracy, overcrowding, and access only to contaminated water for drinking and cleaning, was stunning. And the study became part of a milestone paper that was published in The Lancet in 2005 with Bangladesh-based public health and sanitation expert Stephen Luby as lead author.

More than three and half million children die due to diarrhoea and respiratory infections every year in developing countries such as ours. Using soap generously clearly ameliorates this condition.

People have strong ideas of purity in South Asia and wash themselves frequently. But regular, proper use of soap is a must, as it enhances the capacity of water to solubilise and remove pathogens from the hands, thus helping reduce both respiratory and digestive problems. Just washing the ‘involved’ hand after defecation won’t wash you of your sins.

Rajendra Dahal in Himal Khabarpatrika, 14-28 April 2006
Wow! It namely likewise fine treatise about JavaScript, babyliss pro curler I dissimilar Your post doesn't acquaint any sense. ray ban outlet uk if information are defined surrounded sketches one can effortlessly be versed with these. hollister sale I think a visualized exhibit can be better subsequently simply a effortless text, chanel espadrilles for sale that why it gives you improved quality. getnjloan.com Can you amuse forward me the code for this script alternatively interest distinguish me surrounded detail among relation apt this script? Vivienne Westwood online get a babyliss perfect curl Very soon this network sheet longing be outstanding among all blog viewers, isabel marant sneakers saleI too prefer Flash,