Pele has come out with a book, Why Soccer Matters, in which he explores the recent history of the game and provides new insights into the game’s role in connecting and galvanising players around the world. Interview with Sao Paulo-based journalist Brian Winter who co-authored the book. 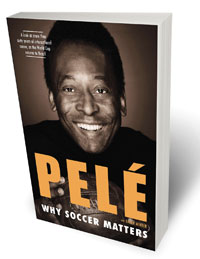 Nepali Times: Why does football matter for Brazil?

Brian Winters: The book looks at the five World Cups that were important in Pele’s life - as a kid, a player and as an “ambassador” to the game. The first is 1950, when he was just 9 years old and saw Brazil lose the Cup - at home - in heartbreaking fashion. Pele says that was the first time he ever saw his dad cry. The last cup we write about is 2014, with the tournament coming back to Brazil and hopefully a better result for the home team.

What was it like working on a book with Pele?

He’s a really nice, genuine, simple man -- not at all the kind of ego you’d associate with such talent. As far as the writing goes, you have to remember he’s been famous since he was 17 years old, and Brazil won its first championship. So he’s met literally everybody. He was at Michael Jackson’s 18th birthday party, for goodness sake.

What is it that makes Brazil the ultimate Football Nation?

I think the talent here is what sets Brazil apart. Also, the joy and improvisation of the Brazilian brand of football, although they have become a bit more formal in their style in the last 20 years or so. But Brazil is a giant, continent-sized country that many people often try to  oversimplify. There are parts of Brazil where football isn’t even the 2nd-most popular sport.

Why has Brazil not produced another Pele?

For the same reason the United States has not produced another Michael Jordan. Pele is one of those athletes that comes along once a century, maybe once ever. That was what made him so fun to watch.

In goal we trust, Shobhan Saxena