Funding for reconstruction is declining after the tsunami but in large parts of Japan’s it has yet to begin
Daan Bauwens in Tokyo,

It's six in the morning. A bus arrives on the barren plane that used to be the coastal town of Minamisanriku. Except for two metal frames of what once were large buildings, there is no sign of human presence. 20 students from Tokyo step out of the bus and visit the grounds. An hour later they join another group of volunteers and start digging the frozen ground to clear away debris the giant mud wave washed up two years ago. 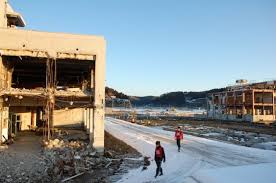 DAAN BAUWENS
Japanese university students survey the tsunami devastation in Minamisanriku before getting to work.

Among them is Akinori Fujisawa, vice-president of the project University of Tokyo Aid (UT Aid) that gathers students from all over Japan to volunteer in the stricken areas on weekends. “Just after the tsunami,” he says, “all Japanese wanted to come here and volunteer. But many couldn’t. Students had the time but not the money to get here while employed people had the money but no time. That’s how we started: we got funding from individuals and companies and started organising these weekend trips.”

It’s not just students. “We come here every weekend with friends,” explains Machiko Ogata, a young Japanese woman in her 30s. “We meet up in Tokyo and drive here together. We all met on one of these sites. It is a social happening.”

But initiatives like this are likely to die out soon. “There will be no more need for people shoveling and digging,” Akinori Fujisawa says. “We would like to start new projects, like trying to improve studying conditions for children in the area. At the moment most of them are doing homework on the streets. But we can’t do anything about it with the current budget.

“What’s more, it’s getting more and more difficult to gather funds,” Akinori adds. “People mistakenly think the reconstruction is over. You can clearly see that’s not the case. But there’s not a lot we can do about it, in two months our organisation will be put to a permanent stop.” While grassroots projects as UT Aid are moving out of the area, an increasingly professionalised group of young NGO and social business leaders is moving in.

Entrepreneurial Training for Innovative Communities (ETIC) in Tokyo is a training centre for young entrepreneurs who want to start a social business. Since the tsunami, the organisation has started a fellowship programme that trains and sends young entrepreneurs into the region to help in rebuilding.

“We already sent more than 135 people into the region,” says Yoshi Koumei Ishikawa, ETIC’s research division manager. “Most of them are in their 20s and 30s and almost all quit their jobs at Japan’s biggest firms to start their own social project.”

At the same time, leaders of successful Japanese NGOs choose to relocate to Tohoku, a devastated region. Katariba, an NGO led by Kumi Imamura (33) has already set up three schools for more than 300 children to compensate for the lack of study space at the temporary homes of tsunami victims.

“But most importantly, local residents are employed as teachers and will soon take over the organisation of the programme,” says Retz Fujisawa (37), coordinator of almost all NGOs working in the area. “The first phase of relief is over,” he says. “Now our intention is to stimulate self-reconstruction, the Tohoku residents must assume leadership now.”

“The Tohoku region is devastated, the damage was enormous,” he explains. “But even without a tsunami the region was heading towards a catastrophe. It was suffering from a very bad economic situation, especially caused by an aging society and the emigration of all young people to Tokyo. If we now are to rebuild the region, we must grab this chance to rebuild it in a way that it won’t happen again, and do everything we can to create a new style of living.”

Retz Fujisawa describes Tohoku as a test case for the rest of Asia. “We are suffering from the fact that all resources, capital and education are concentrated in large cities. In the meantime the rest of the country is being forgotten. We now have the chance to reorganise a whole region and to distribute resources.”

According to Fujisawa, Tohoku is not just a test case but also the perfect example that his country is rapidly changing. “This is the first time an NGO leader is invited to work for the government,” he says. “It is the first time that policy ideas originate from young people down below the decision chain.

“There are as many female as male project leaders in Tohoku. Most are in their 20s and 30s and quit their jobs to come here. There’s one main reason for this: we are all connected by social media, information is being shared and no longer withheld. Young people can start acting on their own. This never happened before in Japan.”

From Hiroshima to Fukushima, Jonathan Schell