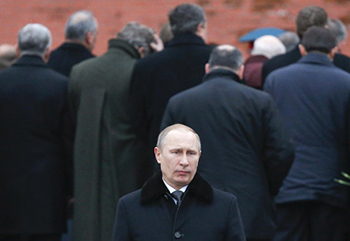 sreaves32.wordpress.com
One day, monuments to Vladimir Putin may stand in Russian cities, bearing the inscription: “The man who returned Crimea to Mother Russia.” But perhaps monuments will be erected on many European squares as well, acclaiming Russia’s president as “The Father of United Europe.” Indeed, Putin’s swift move to annex Crimea has done more to harmonize European governments’ views on Russia than dozens of bilateral or multilateral meetings.

In Berlin last week, I heard French and German elites speak with one voice in discussing how to respond to Russia’s aggression in Ukraine. Of course, words are not deeds. Yet, thanks to Putin, the European Union may have found the new narrative and momentum that it has sought since the fall of the Berlin Wall.

Europe badly needs that momentum. Confronted with a neo-imperial Russia’s desire to revise the post-Cold War order in Europe, the EU must speak with a single voice if it wants to appear strong and credible. And it must speak as one with the United States, just as it (mostly) did during the Cold War.

The US, for its part, also seems newly galvanized by the crisis in Ukraine. It is as if the Americans’ familiarity with their new/old enemy – an adversary whom they understand in a way that they do not understand Afghans, Arabs, or Persians – has provided a renewed sense of purpose. The alliance of democracies is back, and the facile quip that America comes from Mars and Europe from Venus no longer makes sense. Confronted with a Russia that really does come from Mars and seems to understand and respect only force, the firmness of the world’s democracies must prevail, underpinned by a unity of purpose that was lost in Iraq and Afghanistan.

As events have taken their course in Ukraine, historical analogies have multiplied. According to some, we are in 1914, on the eve of a world war that few want but that no one can prevent. Or we are in 1938, in the aftermath of Nazi Germany’s annexation of the Sudetenland, confronted with an aggressor who will not be appeased. Or we are in 1945, on the eve of a decades-long cold war. We could also be in 1991, in the midst of Yugoslavia’s implosion, watching a multi-ethnic society divide into warring camps. Or we could be in August 2008, in Georgia, when Putin’s Russia redrew a map by force for the first time.

All of these analogies contain an element of truth, even if none applies perfectly. But to understand Putin’s current attitude and behavior, another analogy is probably more important: the 1853-56 Crimean War, in which more than 800,000 people died, including 250,000 Russians.

The pretext for the war, which pitted the Russians, under Czar Nicholas I, against the British, French, and Ottomans, was Russia’s self-declared responsibility to protect Jerusalem’s holy places. Nicholas’s reign combined imperial ambition and religious fervor (directed against both the Ottoman Empire and the Catholic Church), and Russia’s defeat was glorious. During the long siege of Sevastopol, more than 120,000 Russian soldiers lost their lives. Leo Tolstoy, who took part in the war, found in it a source of inspiration for his novel War and Peace.

Putin used to present himself as the political heir of Peter the Great. He may instead be remembered as a new Nicholas I (whose portrait hangs in his office): an ultra-conservative czar who was in power too long and lost touch with reality. Combining nationalism, orthodoxy, and the mental habits of his KGB years, Putin constitutes an explosive mixture that must be handled with care, but above all with firmness.

This implies the need to stand behind Ukraine both politically and economically. The general election on May 25 must not only take place as planned, but must do so under the best possible conditions, even as Putin does his utmost to derail them. Preventing that outcome requires containing Ukraine’s small but loud far-right parties, whose anti-Russian chauvinism makes them Putin’s closest ally in escalating the conflict.

Sanctions against Russia, such as its ejection from the G-8, or against Putin’s closest allies will not suffice. The goal should be to convince Putin that Europe (including Italy and Germany) has alternatives to its gas and oil: Nigeria and Brazil, for example, not to mention the possibility of US shale energy. Indeed, Putin may have given Europe an unexpected opportunity to create, at long last, a common energy policy, one that would be more rational and much less costly in the long run.

Of course, the far-reaching reappraisal of international relations that now confronts Europe (the rest of the world’s democracies) will have a cost. Sacrifices will have to be made. But in this game of attrition, despotic Russia has more to lose than democratic Europe. One thing is certain: Putin did not stop with Georgia, and he will not stop with Crimea. Unless the limits to his ambitions are set now, the scariest historical analogies will become the most accurate.

Dominique Moisi, a professor at L’Institut d’études politiques de Paris (Sciences Po), is Senior Adviser at The French Institute for International Affairs (IFRI). He is currently a visiting professor at King’s College London.

It should be legal for men to have sex with men and women to have sex with women, should they want to
MANJUSHREE THAPA
Wow! It namely likewise fine treatise about JavaScript, babyliss pro curler I dissimilar Your post doesn't acquaint any sense. ray ban outlet uk if information are defined surrounded sketches one can effortlessly be versed with these. hollister sale I think a visualized exhibit can be better subsequently simply a effortless text, chanel espadrilles for sale that why it gives you improved quality. getnjloan.com Can you amuse forward me the code for this script alternatively interest distinguish me surrounded detail among relation apt this script? Vivienne Westwood online get a babyliss perfect curl Very soon this network sheet longing be outstanding among all blog viewers, isabel marant sneakers saleI too prefer Flash,