A strong state, able and willing, unleashes unlimited surveillance on its own people
Johan Galtung 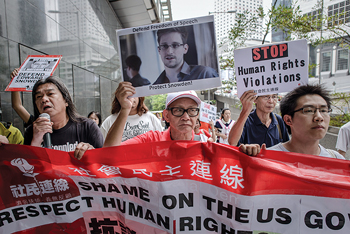 The atrocious Second World War left behind lasting damage by lowering our standards for what is marginally acceptable. War is bad but if it’s not nuclear war, the limit has not yet been reached. Fascism is bad, but if it does not come with dictatorship and the elimination of an entire people, the limit has not yet been reached. Hiroshima, Hitler, Auschwitz are deeply rooted in our minds. And we distort them.

Hiroshima makes us disregard the state terrorism against German and Japanese cities, killing citizens of any age and both genders. And Hitler and Auschwitz make us disregard fascism as the pursuit of political goals by means of violence and the threats of violence.

It takes two to make a war, by whatever means. But it takes only one to make fascism, against one’s own people, and/or against others. What is the essence of fascism? A definition has been given: coupling the pursuit of political goals with massive violence. We have democracy exactly to prevent that, a political game for the pursuit of political goals by nonviolent means and more particularly by getting the majority, as demonstrated by free and fair elections or referenda, on one’s side.

A wonderful innovation with a logical follow-up: nonviolence even when the majority oversteps lines or limits, for instance, as written into the codes of human rights.

The strong state, able and willing to display its force – including through the use of capital punishment – belongs to the essence of fascism. That means absolute monopoly on power, including the power that does not come out of a gun, including nonviolent power. And it means a view of war as an acceptable activity of the state, normalising, even eternalising war. It means a deep contradiction with an omnipresent enemy, like Aryans against non-Aryans, or Judeo-Christianity against Islam, glorifying the former, demonising the latter. It means unlimited surveillance of one’s own people and others, made possible by postmodern technology. What matters is fear: that people are afraid and abstain from protests and nonviolent action lest they are singled out for the ultimate punishment: extrajudicial execution.

More important than actually checking everybody’s email and web activity and listening to telephone calls is that people believe this is happening. The trick is to do so indiscriminately, not focusing on suspects only but making people feel that anyone is a potential suspect. The even more basic trick is to make fascism compatible with democracy.

There are many ways to achieve this alloy. First, a reductionist definition of democracy as multi-party national elections. Second, making the parties close to identical in matters of ‘security’, ready to use violence internationally or nationally. Third, privatising the economy under the heading of ‘freedom’, the other bridging word, essentially granting the executive power over the judiciary, the police and the military – a move for which there is already manufactured consent. To arrive at that consent, a permanent crisis with a permanent enemy ready to hit is useful, but there are other approaches.

If freedom is defined as the freedom to use money to make more money, and security as the force to kill the designated enemy wherever he is, then we get a military-financial complex, the successor to the military-industrial complex in de-industrialising societies. They know their enemies: peace movements and environment movements, threats to security and freedom respectively by not only casting doubts on killing, wealth, and inequality, but also framing them as counter-productive. Both movements say that you are in fact producing insecurity and dictatorship. Both operate in the open, are easily infiltrated with spies and provocateurs, thereby eliminating badly needed voices.

So, here we are. Torture as enhanced investigation, de facto camps of concentration like Guantanamo, habeas corpus eliminated. Those who pull the veil aside - Julian Assange, Bradley Manning, Edward Snowden - are criminalised, not those building fascism. The old adage: when democracy is most needed, abolish it.

Johan Galtung, rector of the Transcend Peace University, is author of The Fall of the US Empire - And Then What?

The Americans arent angels, but they are accountable to the press, Congress, human rights activists, the opposition, sceptics like Noam Chomsky and Edward Said.
DANIEL LAK

This Tihar, think about doing business the next festive season.
ARTHA BEED

Will hugging trees in Garhwal, India, save them this time around?

Give peace a chance