The Arms Trade Treaty is a crucial step towards ending gun violence, but may take years to be legally binding
Lucy Westcott in New York 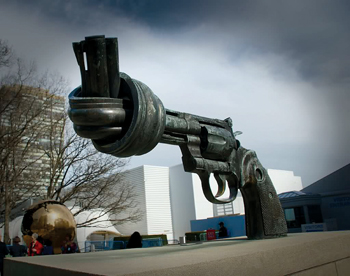 TIE IT: The iconic ‘knotted gun’ bronze sculpture outside of the United Nations Headquarters in New York City which aims to spread the message of violence prevention.
The United Nations witnessed a historic moment on 4 June with the signing of the Arms Trade Treaty, the first time the $85 billion international arms trade has been regulated by a global set of standards. Negotiations took place between 193 countries, 63 of which signed on Monday. More countries are expected to sign by the end of the week.

The treaty will regulate all transfers of conventional arms and ban the export of arms if they will be used to commit crimes against humanity. The treaty also calls for greater transparency and for nations to be held more accountable for their weapons trading. States will undergo rigorous assessment before they move arms overseas and have to provide annual reports on international transfers of weapons.

But some of the world’s major arms importers and exporters, whose inclusion is crucial for the treaty’s success, have abstained or declined to give their signatures. Syria, North Korea, and Iran were the only three countries to fully oppose the treaty, while Russia, China, and India abstained.

The United States, the world’s largest arms exporter, did not sign, but is expected to by the end of the year. Technicalities in the language of the treaty were the reason for not signing; while US support for the treaty is “strong and genuine”, there were inconsistencies in comparison between the English-language and translated versions of the treaty, said Daryl G Kimball, executive director of the Arms Control Association.

In a statement released by the State Department on Monday morning, Secretary John Kerry welcomed the treaty, ensuring that the US’s signing would not infringe on the fiercely debated Second Amendment rights of US citizens.

“We look forward to signing the treaty as soon as the process of conforming the official translations is completed satisfactorily,” Kerry said.

The treaty is a crucial step towards ending the deaths of the 500,000 people Oxfam estimates perish from armed violence each year. “The most powerful argument for the treaty has always been the call of millions who have suffered armed violence around the world,” Anna Macdonald, head of Arms Control, Oxfam, said, “their suffering is the reason we have campaigned for more than a decade.”

When asked if the treaty could prevent atrocities like those which have occurred in Syria, Macdonald said she believed it could, if implemented correctly. With such vast negotiations taking place, disagreements were bound to arise.

“Items such as the scope of weapons covered by the treaty and the strength of human rights provisions preventing arms sales in certain circumstances are not as strong as we would have wished,” said Jayantha Dhanapala, president of the Pugwash Conferences on Science and World Affairs. He said the treaty was a “long overdue step” in realising Article 26 of the UN Charter, which calls for the ‘establishment of a system for the regulation of armaments’.

The treaty will go into force after it receives 50 ratifications from states that have signed. This is expected to take up to two years, but some states, including the United Kingdom, have agreed to already start enforcing the rules of the Treaty. One victim of gun violence was at the UN to witness the signing, the first step on the path to the treaty’s ratification.

Alex Gálvez, 36, was 14 years old when he felt a bullet course through his right shoulder, exiting through his left one. Gálvez is now executive director of Transitions Foundation of Guatemala, an organisation that helps Guatemalans living with disabilities, many of whom have been injured by small weapons.

“Unfortunately not everyone had the opportunity to get treated in time, to get educated about arms,” Gálvez said. “It’s not just Guatemala that is suffering [from armed violence]; many other countries are suffering too.”

Shopping till you are dropping

With Dasain and Tihar over and less than seven weeks to go for Christmas, Kathmandus trinket bazaars are gearing up again for the next holiday season.
HEMLATA RAI

Corruption rules. It determines what flies over our heads and what is driven on our roads.
ARTHA BEED
Wow! It namely likewise fine treatise about JavaScript, babyliss pro curler I dissimilar Your post doesn't acquaint any sense. ray ban outlet uk if information are defined surrounded sketches one can effortlessly be versed with these. hollister sale I think a visualized exhibit can be better subsequently simply a effortless text, chanel espadrilles for sale that why it gives you improved quality. getnjloan.com Can you amuse forward me the code for this script alternatively interest distinguish me surrounded detail among relation apt this script? Vivienne Westwood online get a babyliss perfect curl Very soon this network sheet longing be outstanding among all blog viewers, isabel marant sneakers saleI too prefer Flash,